How to Talk to a Leo Man About Feelings 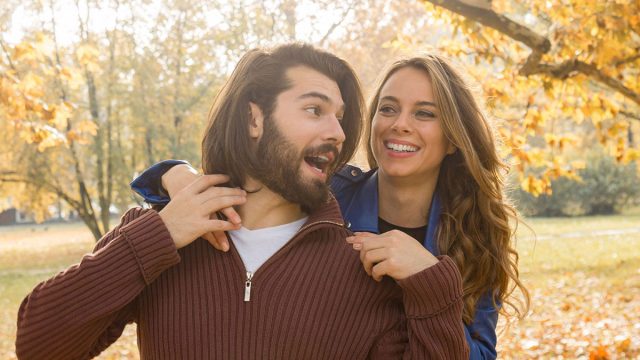 A Leo man’s feelings can be intense and powerful. He’s one of the most passionate signs in the zodiac.

Yet he also tries to hide his vulnerable feelings. He will channel fear and pain into anger. He’s not always assertive.

A Leo man hiding his feelings may try to downplay his emotional attachment to you. He may also try to hide it when he’s feeling upset.

When a Leo man is happy or in love, he usually shows his feelings in dramatic ways. He may even go overboard trying to spread excitement and joy.

Yet a Leo man doesn’t like complicated feelings. Any emotion that makes him seem weak or exposes his inner sensitivity will scare a Leo man.

Play to His Ego

If you see signs a Leo man is not interested in you, there may be little you can do to change his mind. Leo men are willful and stubborn. Yet if you’re sensing an attraction, play to a Leo man’s ego.

When a Leo man is falling in love with you, he may reserve his emotions slightly at first. When he does this, you can encourage him to open up and share his feelings with you. Leo men tend to be ego driven.

Express admiration for him and play to his desire for praise. Leo men are prone to give in when you flatter them. Be certain your admiration comes across as authentic or else he will just feel manipulated. He won’t fall for any pressure to open up before he is ready.

Tell a Leo man all the things you know he wants to hear. That he is the most courageous, daring, intelligent and powerful person you know. Admire his successes and personal talents as well.

When you see signs a Leo man has a crush on you, the best thing to do is counterintuitive. Rather than running toward him, take note of his signs of interest and then step back. Let him chase you.

Once a Leo man sees that you are interested in him, he’ll be encouraged to pursue you. But if you are too available or try too hard to get him to talk about his feelings for you, it will only backfire. He’ll pull away from you.

Leo men are independent. They don’t want to feel smothered. When you show too much interest at once, he will feel like you are smothering him. Ironically, a Leo man will step up to the plate and show great passion in his pursuit of you if you give him space.

If you corner a Leo man and try to get him to open up about his feelings, you’ll have a difficult time getting the results you want. Rather than becoming sentimental and vulnerable, he will more likely become defensive. It’s best to give him breathing room when you want him to open up on a deeper level.

A Leo man testing you can try to push your buttons to see how you react. He may try to incite jealousy or insecurities to see how committed you are to him. Whatever you do, always be honest with a Leo man.

Leo men will open up in gradual stages. At first, he may boast about his passions and feelings. But you’ll notice he only talks about positive feelings or things that make him seem strong and powerful.

When you are honest with a Leo man, he will start to open up on a more vulnerable level. His trust for you will grow. This is essential to getting him to talk about his feelings. Though he’s often cheerful and optimistic, he has a guarded side. What he guards over is his vulnerability.

You may not realize how sensitive a Leo man is at first. He’ll make sure you only see a façade of happiness, success and grandiosity. Yet when you want him to talk about his deeper emotions, you’ll have to earn his trust by being honest with him.

When a Leo man is done with you, you’ll know. He won’t waste your time or his trying to protect you from hurt feelings. When it comes to communicating with a Leo man, he appreciates it when you are equally direct.

Opening the door to talk about feelings with a Leo man means accepting anything he may be feeling. When he starts to tell you about his feelings, you may hear things you didn’t expect. Be honest and open but also be direct.

A Leo man knows communication is a two way street. He will expect you to be direct with him. The key is to be honest and straight forward without overwhelming him. If you pour your heart out, it can be too much for him.

If you are wondering how to know when a Leo man is playing you, pay careful attention to how he interacts with you when sex is not involved. When a Leo man is interested in you, he’ll be generous and kind. He’ll always try to lift your spirits.

Like anyone, Leo men have their flaws. Just don’t go out of your way to remind him of this. Leo men are proud and have a sensitive ego even though they try to hide this. If you criticize a Leo man, he may never recover from the wound.

He’ll shut down completely. A Leo man who is faced with constructive criticism may be open to the message only if his ego is bolstered significantly first. If you have to say something to a Leo man that may hurt his feelings, be sure to couch your message in much positivity.

Let Him Save Face

If you’re wondering how to tell if a Leo man is falling for you, be patient and observe his behavior in addition to what he says. Leo men can get caught up in the grips of passion and sometimes they get ahead of themselves.

If he declares grandiose plans to marry you or elope in some adventurous way, but then starts to get cold feet, don’t throw his past grandiose words back at him. It is very likely that he genuinely cares about you but that his promises were a byproduct of his dramatic style.

Give him time to see if he follows through with the things he promises you. Just because he backs down initially, doesn’t mean he never had feelings for you in the first place. It’s common for Leo men to be grandiose and then cool off when reality sets in.

What a Leo man looks for in a woman is someone who is strong, independent and assertive. He is drawn to a woman who is as creative and ambitious as he is. When a Leo man sees that you are assertive, he’ll be turned on.

An assertive woman can inspire a Leo man to open up and talk about his feelings. The irony with a Leo man is that the more strength and independence you project, the more vulnerable a Leo man will become around you. He’ll start to open up about his sensitive side.

When you project an image of assertiveness, you can disarm a Leo man. He’ll assume it is safe to open up and express his deeper feelings because he won’t be worried about you becoming clingy or smothering.

Sometimes, the best way to get a Leo man to talk about his feelings can be to prime him by first opening up about your emotions. This won’t always work, but it can give him a deeper sense of security. The more you can give specific examples of various feelings, the better.

This is because Leo men tend to be highly emotional but also theatric and dramatic. They don’t always know how to articulate exactly what they are feeling and instead of talking about their emotions they may shift to focusing on other things and ignore their feelings.

The more you give a Leo man concrete examples of exactly how you are feeling and what different emotions look and feel like, the more a Leo man will be inclined to open up and share his feelings with you. Think of this strategy as helping him develop the phrases to communicate with you.

Why do Leos hide their emotions? Sometimes it is so they don’t look weak or vulnerable. Other times it is because a Leo man doesn’t feel like he’ll be able to maintain his pride and save face if he is also opens up and shares his emotional side.

A Leo guy hiding his feelings at work may be trying to avoid office drama or politics. There are many reasons he will try to hide his vulnerabilities and most have to do with his desire to convey strength, power and status.

The more you try to empower a Leo man, the better. When you express how you feel about a Leo man, do so in ways that empower him and remind him that he is under no pressure. The more empowered a Leo man feels the more he will open up to you.

When you want a Leo man to open up to you, keep your communications positive and upbeat. When a Leo man feels a discussion is turning too serious or emotionally heavy, he will shut down.

Don’t dwell on negativity when you’re talking to a Leo man about your feelings. Keep your message uplifting and inspiring. When you set the scene for a Leo man to feel comfortable and empowered, he will let his guard down.

A Leo man who is open and relaxed because of a positive atmosphere will be more likely to tell you how he feels about you. He’ll trust you to support and hold space for him when he sees that you have a cheerful disposition.

What Happens After a Leo Man Breaks Up with You10 Tips for When a Leo Man is Ignoring You
Hello, I'm Liz