Best Ways to Communicate with a Leo Man 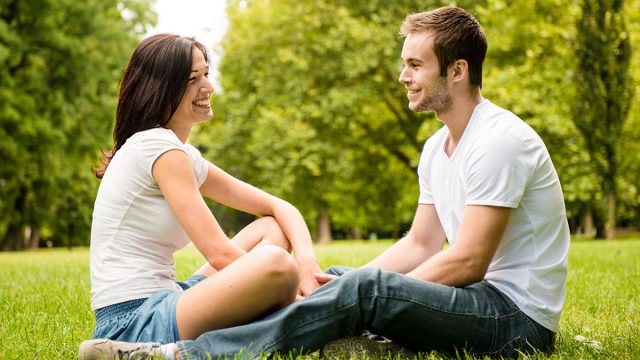 For the typical Leo man, communication can be pretty challenging. His loud, outgoing personality may quickly become overpowering.

Leos are ego-driven, and they enjoy being in the spotlight. They’re not shy about communicating but tend to go over the top.

If you want to relate to a Leo man in a meaningful way, then a scattergun approach will do no good. Instead, you need to develop strategies.

Finding a way to enjoy worthwhile communication with a Leo guy takes time and effort, but stick with it. After all, you are dealing with a unique creature here.

With some thought and practice, anyone can learn how to best communicate with these friendly, caring, but often fickle lions. A performer plays to the crowds. Here you play to your audience – Mr. Leo.

Hearing and listening are two different skills, but few of us are very good at the second option. Listening means taking in what someone is saying, processing it, and responding appropriately.

The standard Leo communication style involves making lots of noise, and in amongst that, instant decisions.

Making an effort to actively listen, and respond, will help your relationship run more smoothly. Leos don’t enjoy repeating themselves over and over.

Sometimes you can exploit the listening angle by creating situations for him to speak with authority. If he plays a sport, have him teach you. Leos love to be the leader, advisor, or mentor, so why not make the most of it.

Is your Leo man not communicating with you? Here's the trick to reel your Leo back in.

Positivity is the keyword to remember for good communication with Leo men. Seriously, they cannot get enough praise, flattery, and encouragement.

It’s like Leos have a small, insecure space inside their head that can never be completely filled.

Like their lazy lion zodiac totem, Leo men rely heavily on motivation to do what they need to. Without encouragement, nothing that takes effort may ever happen.

Luckily for you, there’s a secret weapon you can draw on here. The Leo ego!

With some cleverly timed mentions of potential benefits, such as publicity or networking, you give a Leo man space to think. To repackage it as his idea! He’ll rarely say no if there’s an image-building opportunity to be had.

If you need help in the domestic realm, try appealing to his ego through flattery. Leos will resist direct requests they see as demands but happily take on tasks they feel depend on them for success. It’s a simple but effective tactic.

Humor is a great way to both create and strengthen the bond between a Leo man and yourself. It is a communication method that is so useful but often undervalued.

From private jokes and shared smiles to silly stories and helpless, roll-on-the-floor laughter, there’s something magical about the connection humor creates between humans. It’s such a flexible communication method too.

Different kinds of laughter provoke different responses, and upbeat, curious, and social Leos respond well to them all. A Leo man’s texting style is often based around shared jokes and silliness. That’s also a great way to flirt.

If you ever wonder what to say to a Leo man to turn him on, use humor to get your point across. Laughter creates a shared space that is both exciting and comfortable, a language that says a lot without words.

Let’s be clear from the start, there’s only room for one leader and decision-maker in a Leo’s relationship, and that’s him.

He’s more than willing to acknowledge other ideas, opinions, and solutions to problems, but he’ll expect the last word.

Although such an approach seems unrealistic for a balanced relationship, it seems to work.

Maybe that’s because there’s scope to work around strong personality traits if you make the effort. It’s best to be indirect and gentle.

Leo men like to create as much dramatic effect as they can when communicating. They are the guys who arrange elaborate stunts to make marriage proposals or help charities out in some wacky, newsworthy way.

Unfortunately, that only really suits Leos when they are the party in control or getting tangible benefits as a result. Any communication on your part that doesn’t fit these parameters needs to be handled with care.

When your Leo man is getting lost in theatrical dramatics, don’t engage; just gently diffuse the tension. Try whispering over shouting; it changes the brain’s response to what’s being said and calms situations.

If you need to text a Leo man with a suggestion or request, use the sandwich technique. This means wrapping up the less pleasant news, or demand, with a positive statement on either side.

Let’s be upfront about something – Leo guys don’t do “subtle.” Not in their attitudes – Leos love to share their strong opinions, even when they’re unpopular.

Not in their interactions either. Leos can happily take the truth, so honesty is the best policy.

Leo is confident about his status, but he needs to trust and believe in those closest to him. He respects your honesty, so long as it doesn’t directly cause him to lose face.

If you have broken up and are unsure what to text a Leo man to get him back, be honest.

So long as you’re sincere, he’ll appreciate it. Of course, it may not get you the outcome you want, as Leo will be honest in return. He doesn’t play games; he just tells it how it is.

They say communication is a two-way street, but Leo men test the truth of that statement. Leos certainly have plenty to say, and they generally believe they are right.

To communicate well with a Leo man, you need to use logic. That means presenting a good case and using evidence and reasoning to support your opinion or question. You need to know what you’re talking about, so get your facts straight.

Leo’s aren’t being awkward, well, at least not on purpose. They just assume their way is the right way. If you are keen to make a Leo man chase you, give him a reason to pursue. Intelligent arguments are a good starting point.

No matter their good intentions, Leo men do have a habit of being bossy and even overbearing at times.

It’s not a surprise, considering these lions automatically take on the role of leader. That leads to control issues, restrictions, and resistance to delegating responsibility.

The blunt truth is Leo men often disrespect boundaries in their endeavors, even though they believe they’re doing the right thing. They may mean well, but they can still cause problems, and you can’t afford to let that slide.

The way to tackle this is with a firm communication style. Don’t be afraid to put together a list of questions to ask a Leo man. Be reasonable, firm, but fair, and stand your ground.

Sometimes Leo men forget that their life partner is an individual with her own ideas and needs.

Leos don’t mean to overlook that; they just love so profoundly the lines blur. That’s why a Leo man respects your feelings when you get firm.

We are spoilt for choice with such a range of options available to aid communication. These include Emails, texts, online video conferencing, and group chats on social platforms.

However, face to face is still the most productive way to communicate with a Leo man.

Expecting contact to be in-person is less realistic these days, but it’s the best way to see a Leo in his best light. While a Leo man’s texting habits are impeccable, he shines when there’s a live audience to play for.

Leos are leaders of people. He draws energy from the presence of others, even if communication seems a little one-sided.

Sure Leo men are sometimes difficult to be around, but they can only truly be their best selves with a live audience.

Weakness is probably top of the list of a Leo man’s turn-offs. However, he respects and responds well to passion, self-belief, or any other form of confident communication.

Don’t even bother approaching a Leo if you aren’t sure of yourself and your facts. Leo guys tend to adopt a pretty tough persona in their role as the self-appointed leader of the pack.

If you have news or even hot gossip to pass on, be confident about its accuracy. Leos have a burning desire to know everything, but they also have a status to uphold, so it’s better not to threaten that.

With a Leo, what you see is not necessarily what you get. Underneath all that noise and showing off is quite a complex creature. Perhaps it’s easier to compare Leo men to actors.

Like performers who play a familiar role on stage every night before retreating to their private space, that’s pretty much a Leo man’s default setting. Sensitivity is the way to break through.

Leo has a distinct public face, where he’s the leader, the wise one. This is kept separate, where possible, from his private persona. One way a Leo man tests a woman is to reveal just a sliver of his vulnerable side.

With the correct response, he’ll let his guard down, little by little. Don’t be surprised by his need for sensitivity.

After all, Leo has a top-man reputation to maintain, so he only shows his soft side to his inner circle.