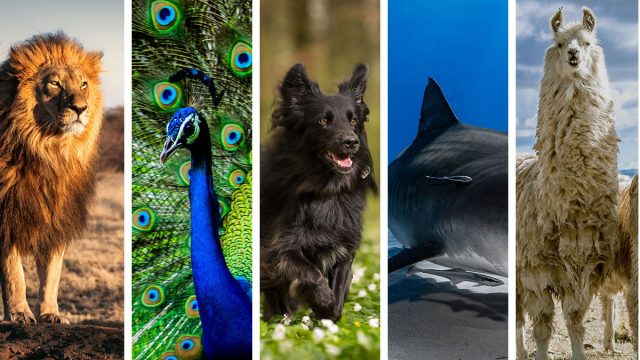 If you want to gain a better understanding of the Leo in your life, then you should learn about the Leo man’s animal.

You can determine someone’s spirit animal by connecting their astrological sign’s traits to the characteristics of particular animals.

So, which creatures from the animal kingdom convey the unique qualities of a Leo man?

By learning more about his sign’s quintessential personality traits and behaviors, you will be able to recognize a Leo man’s spirit animals.

I also have an article about Leo woman’s animal that you may find interesting.

Peacocks have long been associated with pride because of their striking, colorful plumage. The peacock spreads its feathers in an ostentatious display when it wants to attract a mate.

The peacock symbolizes confidence, which the average Leo man has in abundance. This cocky zodiac sign is so self-assured that the flashy peacock is his perfect Leo spirit animal.

A Leo man enters every social situation with complete calm and conviction. He knows that others would be lucky to befriend him and he carries himself with comfort and ease.

Although his confidence is admirable, pride is also one of a Leo man’s negative traits. His pride gets in the way when he can’t admit that he’s wrong and apologize after hurting someone.

His pride also makes him fiercely competitive, and a Leo guy is a sore loser. If you beat him in a competition, especially in a skill he excels at, you can expect your Leo man to sulk for hours.

But for the most part, a Leo man’s pride and confidence are commendable characteristics that many other zodiac signs would do well to emulate.

If there is any zodiac sign that loves to take the stage and knows how to put on a good show, it’s a Leo man.

His confidence makes him crave recognition, so he will do anything to get the attention of everyone in the room.

Many Leos end up working in fields that garner a lot of attention and put them in the public eye, such as acting, music, or professional sports.

Like the flashy, vibrant peacock, a Leo man is bold and prideful, and he knows just how to make everyone notice him.

This is the #1 mistake women make with a Leo man... 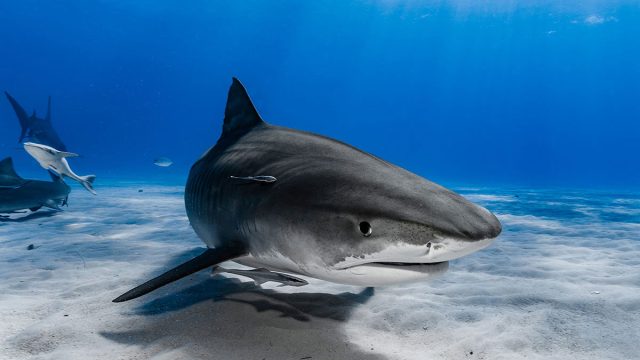 Few creatures strike fear in the hearts of men and other animals like the ocean-dwelling shark.

With its beady eyes, pointy teeth, and powerful jaws, the shark is easily one of the most fearsome predators in the world.

The aggressive, scary disposition of the shark earns this animal a place on the Leo man’s spirit animal list.

Every zodiac sign belongs to one of three modalities: cardinal, mutable, or fixed. A sign’s modality reveals how that sign moves through and interacts with the world around it.

Leo is one of the fixed zodiac signs, and fixed signs are known for being stubborn, organized, and good at following through and finishing tasks.

Fixed signs, however, may struggle to initiate tasks and get stuck on the minute details, but eventually, they push through to get the job done.

A shark doesn’t need to use trickery or rely on fellow sharks to catch its prey. It roams freely through the water, intimidating everything in its path and fearlessly gobbling up unsuspecting schools of fish.

While many ocean-dwelling creatures have to use camouflage, traps, or other methods to feed themselves, the shark merely charges with full force towards its prey from below, often launching itself and its target out of the water.

Its sharp teeth, strong jaws, and ability to swim fast are the shark’s greatest assets. Like the fixed sign Leo, nothing can stand in its way once it has a target. 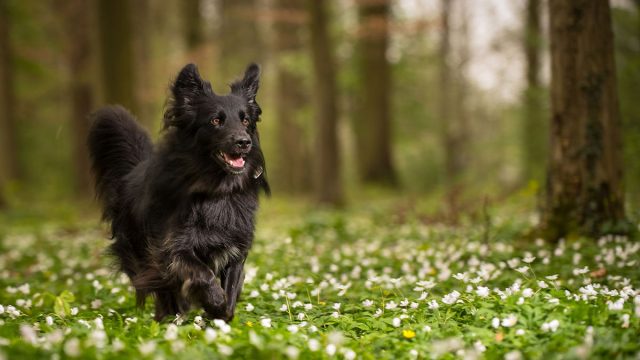 The dog has long been known as man’s best friend and a symbol of loyalty. Dogs bond closely with their pack, whether the pack is composed of humans or other dogs, and are extremely faithful.

Like the dog, one of a Leo man’s best qualities is his loyalty. He makes a faithful friend, employee, and romantic partner, and he takes betrayal very seriously.

You might assume since a Leo guy loves attention so much that it’s hard for him to be faithful to just one woman, and there is some truth to that.

Leo man can’t help but seek attention from everyone in the room, including women who aren’t his partner.

When a Leo guy is single, he roams through parties and bars like a wild male dog searching for a female dog in heat.

He will date several women at once or hop quickly from fling to fling before settling down. He is charming and flirtatious, and he knows his worth. He won’t give up his bachelorhood and promise himself to just anyone.

He needs to know that the woman he is seeing is his equal before he will take the relationship seriously enough to commit.

But a Leo man is passionate and romantic, and he searches actively for the woman who can be his better half.

He takes love and commitment seriously, so a Leo male in love will remain faithful to his partner. Once he is in a committed monogamous relationship, he won’t stray from the woman he adores.

A Leo man’s loyalty has a sharp edge to it, as well. Because he is so faithful, he expects nothing less from his loved ones and can become extremely jealous if he is betrayed.

When a Leo man is jealous, his dog spirit animal changes from a sweet Labrador into an angry Rottweiler.

This magic will make your Leo man want a relationship with you. 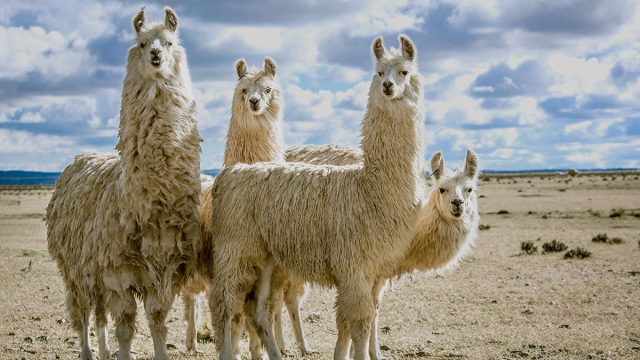 With the long neck of a giraffe and the wool of a sheep, the llama is a very strange and unusual-looking creature.

While llamas have long been raised for their wool, which can be harvested and made into rope, yarn, and fabric, llamas have also been increasing in popularity on farms due to their protective nature and guarding abilities.

You probably already know that dogs are often used to herd sheep and protect flocks from harm, but did you know that llamas can also serve as shepherds?

When one llama is introduced to a herd of sheep, particularly a male llama, he will diligently circle the perimeter of the flock and keep watch for predators.

If more than one llama is added to a herd, the llamas will bond with each other and ignore the sheep, leaving them defenseless.

Farmers have observed llamas protecting flocks from coyotes, foxes, and dogs by making alarm noises when they see a predator.

The llama will even kick, spit, or charge at an intruder and try to scare it away so that it won’t attack the herd.

Llamas are used not only to protect sheep but also to guard goats, hens, and other livestock.

Like the llama, one of the typical Leo traits is protectiveness. A man born under this zodiac sign believes he has an obligation to defend his loved ones and shield them from harm.

A Leo man makes an extremely protective spouse and father. If anyone threatens his family, he will do whatever it takes to keep his loved ones safe.

If someone says something negative about his friends behind their backs, a defensive Leo guy will stand up for them.

If his child is being bullied at school, a Leo man will march into the principal’s office and demand that action be taken against those who are hurting his kid.

The protectiveness of the llama makes it a great representation of the typical Leo man. 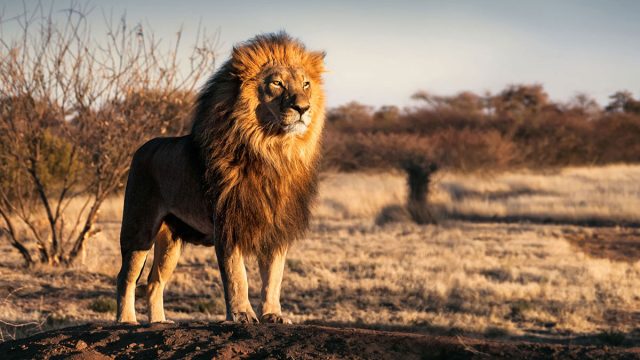 Many zodiac signs have an animal symbol that encapsulates the distinctive personality traits of that sign. The Leo animal symbol is the fierce lion.

As Leo’s astrological symbol, it’s fair to say that the lion is the perfect Leo spirit animal. Since it is the king of the jungle, the lion spirit animal tells us that a Leo man has a regal air.

You can always tell when a Leo guy enters the room because of his commanding presence and majestic aura.

Each zodiac sign belongs to one of four natural elements: fire, air, earth, or water. A sign’s element tells us about that sign’s temperament and values.

Leo is one of the three fire signs of the zodiac, and fire signs are known for being forceful, zealous, and energetic.

The fire element is very strong and powerful. It can cleanse, overtake, and even destroy anything in its path when it burns hot enough.

Due to their fiery nature, Leo men are active and aggressive, even in romantic relationships.

A Leo man in bed likes to take the dominant role, and won’t stay with a woman who emasculates him or tries to control him in the bedroom.

He doesn’t like being told what to do, and he needs to feel like he holds the most power in the relationship.

What a Leo man looks for in a woman is submission, adoration, and faithfulness. He wants a partner who lets him be in charge and is willing to accommodate him.

In return, this lion-hearted man offers loyalty, protection, and a fiery, passionate romance.

Why Are Leo Men So…?9 Tips to Get a Leo Man Back After a Breakup
Hello, I'm Liz