Will a Gemini Man Apologize After Upsetting You? 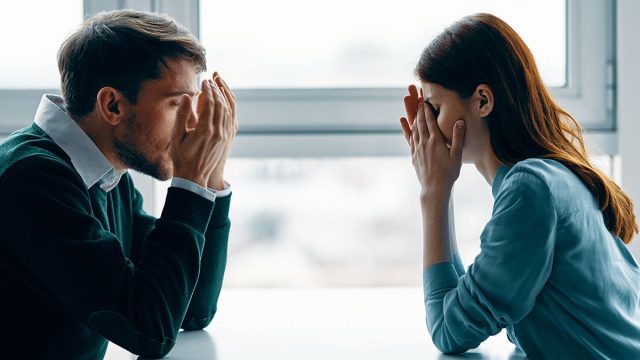 A Gemini man apology is often an attempt at diplomacy. There is no question he’ll apologize if you’re upset.

The bigger question is, how much does he sincerely mean it?

How do Geminis apologize? They will use their apology as a means to keep the peace and avoid confrontation. Gemini men are communication savvy and they don’t like drama.

A Gemini man will apologize like the manager of a store when a customer is upset. He’ll say all the right things to make you feel better, but he may or may not actually change anything.

He’ll apologize to appease you. He’s quick to act as a people-pleaser. He’ll want you to stop being upset so the two of you can have fun again.

What happens when you ignore a Gemini man? He’ll become more eager to chase you. When he thinks you’re upset, he’ll panic and apologize as fast as possible. He’ll try to smooth things over.

Gemini men don’t like it when people around them are angry or upset. Partially, this is because he’s not good at handling his own feelings. He’ll try to keep the peace so that he doesn’t have to deal with an emotional flare up.

He will also try to come to some kind of compromise. He’ll be quick to admit wrong-doing and to try to make you feel happy. Sometimes this involves deeper reflection on his part, other times it involves more of an intellectual, surface level response.

His goal is to lift your spirits and to save face. He doesn’t want to be seen as the bad guy. He’ll try to apologize to get the relationship back on track before things get any worse.

Your Gemini man doesn't love you anymore? Don't be so sure!

He’ll Try to Make You Happy

A Gemini man will try to make you happy if you’re upset. Yet he’ll do this without really thinking about what he did wrong. He’ll put all his focus on your emotional reaction and trying to make you feel better.

This may seem to work at first, except often it means a Gemini man has corrected a situation in the short term without really addressing the bigger issues that led you to become upset in the first place. For example, if you’re upset because he’s texting with his ex on social media, he’ll apologize quickly.

He’ll delete his ex from that particular app because that’s what you said you wanted. Yet he’ll continue to talk to her on other platforms because ultimately he wants to maintain the friendship with her, while also trying to please you and make you happy.

He’ll Say What You Want to Hear

How does a Gemini man act when hurt? He’ll try to stifle his own feelings but if you pay close attention, you’ll see his eyes tear up and hear a change in his tone of voice. He’ll try to appease you.

He’ll tell you exactly what he thinks you want to hear. Gemini men have a gift for anticipating what people want. Like a salesman, he’ll speak to your motivations and urges and will convince you that he’s going to fix the situation that upset you.

Sometimes he does actually work to remedy the issue. Other times, he just says all the right things but doesn’t back up his words with actions. Sometimes he makes halfway measures and starts to work on fixing a problem but then becomes bored or distracted and moves on.

Get your Gemini man back after a breakup thanks to this short video.

He Talks a Good Line

When a Gemini man is mad at you, he may channel his anger through words. He can have a sharp tongue and can cut you down if he feels a line has been crossed one too many times. Yet usually Gemini men prefer to keep the peace and be diplomatic.

When a Gemini man hurts you, he’ll say all the right things to make you think he’s taking responsibility for his actions. He talks a good line but he doesn’t always follow through. He’ll say everything he can to reassure you.

He’ll apologize and identify all the ways he acted irresponsibly and inappropriately. He’ll also tell you a list of all the things he’s planning to do to remedy the situation. Whether he follows up and does these things or not is another story.

A Gemini man tries to avoid conflict. He won’t avoid apologizing, but he may wait until it is obvious that you know he’s done something wrong. If a Gemini man can try to get away with something and slide through under the radar, he will.

Yet when you confront him and let him know directly how much his actions or words have upset you, he won’t play games at that point. He’ll admit he was wrong and apologize. He doesn’t like conflict, but he definitely doesn’t want the conflict to worsen.

A Gemini man who cares about you will want to put out the fire before it creates irreparable damage. For this reason, he’ll start apologizing profusely once it is clear he can’t avoid responsibility. The last thing he wants is for a situation to escalate.

Gemini men try to tiptoe around problems and so you may have to be the catalyst for his apology by speaking up directly about what has gone wrong. Once you do, however, a Gemini man won’t usually put up a fuss. He’ll apologize and try to move on from the situation as quickly as possible.

Gemini can be among the most apologetic zodiac signs. Yet a Gemini guy’s style of apologizing is different from other signs. Unlike a man who apologizes from a deep level of emotional empathy, who actually feels how much he’s caused you harm, a Gemini’s apology is superficial.

He may or may not mean it, but his apology stems from an intellectual understanding that he did something wrong, not from emotional empathy. If he were to feel your pain on an emotional level, his apologies would be more sincere and infrequent because he would take action to correct the situation.

Instead, he analyzes the situation mentally and will talk about what went wrong as if he were reviewing a book or movie. He has some degree of understanding when he apologizes, but it is often a superficial level of understanding.

This may be suitable still because he will say all the right things to make you feel like he knows what he did wrong. Yet because his apology was intellectual and superficial, it may only be a matter of time before he’s back in the situation of apologizing for the same thing all over again.

It may be important to remember that actions speak louder than words. Gemini men are masters of words and can use their articulate nature to try to assuage your hurt feelings. Yet this doesn’t mean they are truly sorry nor does it mean they’ve internalized the lesson from the conflict for which they are apologizing.

If you’re wondering how to make a Gemini man feel guilty, almost anything you do to show him you’re unhappy will work. Gemini men aren’t so proud as to think they are blameless.

He’ll want to make you feel better when you’re upset and may even assume more blame than necessary just to try to make amends. He may try to apologize to you through text. This can be his ideal method.

This way he doesn’t have to feel the discomfort of your emotions and can remain detached and intellectual. Of course, this is a rather impersonal way to apologize and so you may feel it is insufficient. If this is the case, he’ll eventually apologize face to face.

Yet in an effort to stay in his own comfort zone, a Gemini man will first try to apologize through these detached and distant measures. He’ll want to be let off the hook without really investing emotionally in the situation. Those born under the Gemini sign can be emotionally distant.

Why your Gemini man might lie to you? Make sure he is always honest about his feelings for you.

He’ll Apologize to Move On

How a Gemini apologizes is as important as why. A Gemini man will apologize for the purpose of moving on and avoiding drama. He isn’t always looking for self-improvement or deep reflection. He may be in a hurry to just go back to normal.

He isn’t always apologizing because of some deeply felt epiphany. An apology is a means to an end for a Gemini guy. If you want to know how to get a Gemini man to chase you again, the key is to not seem too emotionally needy. If you want more of an emotional connection, it could scare him away.

If he apologizes but you aren’t convinced that he means it on a deeper level, choose your timing wisely before bringing this up. A Gemini man will become distant if he feels like he’s constantly being reminded of what he did wrong.

If you want to know how to make a Gemini man miss you after a breakup, you’ve got to give him some distance. Sometimes the best way to make him miss you is to not be too available. This will encourage him to fantasize about the good times you shared together and to want to be with you.

What Happens After a Gemini Man Breaks Up with YouThe Gemini Man’s Best Compatibility Match for Marriage
Hello, I'm Liz