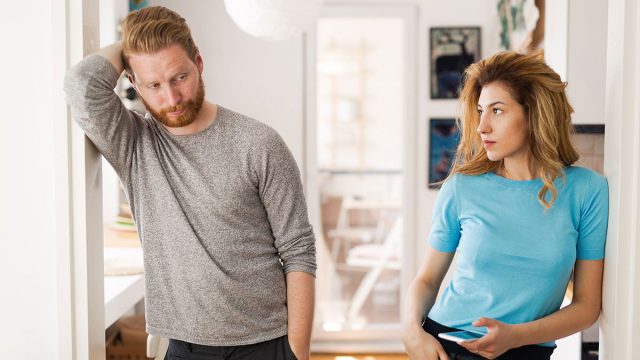 If he has been unresponsive or pulling away from you, you may find yourself suddenly dealing with a distant Pisces man.

What makes this zodiac sign withdraw or disappear completely?

Pisces men are notoriously fickle, so there are many reasons why your Pisces guy could have fallen off the radar.

Don’t jump to any conclusions and think that his aloofness is a sign that your Pisces man is not interested in you anymore.

By learning more about his zodiac sign’s typical personality traits and behaviors, you will be able to understand why a Pisces man suddenly becomes distant.

Pisces men are dreamers and they often get lost in thought. One of the most likely reasons why your Pisces guy hasn’t reached out to you is because he simply forgot.

This doesn’t mean that he forgot about you or that he doesn’t like you anymore. It just means that he’s so busy with his plans and ideas that he’s not thinking about you, or anyone else, for that matter.

When your Pisces guy is being difficult to reach, try to make plans with him, and don’t push too hard for contact until you meet in person.

Give him time to focus on his other projects, and it will make the time you spend together that much more special and meaningful.

If you are wondering, “Why do Pisces distance themselves?” The answer could be as simple as he needs some time alone to recharge.

Pisces men tend to be introverted, and as much as they enjoy being with their loved ones, they need to take some time alone to be their best selves.

When he needs some time to himself, let a Pisces man chase you once he’s had enough alone time instead of pressuring him to hang out or making him feel guilty for his absence.

Your relationship will thrive if you give him a little space sometimes instead of coming off needy and desperate.

You Hurt His Feelings

Pisces men are highly emotional and sensitive. Your Pisces guy might be distancing himself if you’ve done something to hurt his feelings.

He’s either licking his wounds in private before coming back to face you, or he’s decided that, because of what you’ve done, you’re not right for him and is taking a step back from your relationship.

Think back on your interactions with your Pisces guy and try to remember if you said or did anything that might have upset him.

Perhaps you already know what you did to hurt his feelings, whether it was intentional or not.

Reach out to your Pisces man with an apology and explain that you know you’ve hurt him and won’t do it again.

Pisces is a very forgiving sign, and a Pisces guy is unlikely to hold a grudge. He will come back to you when you show him that you know what you did wrong and are truly sorry.

Someone Else Hurt His Feelings

Even if you’re not the one who caused his suffering, a Pisces man still might distance himself if someone or something else hurt his feelings.

In this case, he’s not trying to punish you or push you away; he simply prefers to handle his negative emotions on his own.

When you’re not sure what to do when a Pisces man pulls away, you should check in on him to see how he is feeling. Ask him if he’s okay and if there is anything you can do for him.

Even if he’s upset and not ready to see anyone, he will still appreciate your thoughtfulness and that you’re there for him.

When a Pisces man has a crush on you, he gives you his undivided attention and wants to spend all of his time with you.

That’s why it can be particularly heartbreaking when a Pisces man distances himself. He could go from being by your side constantly to never talking to you again.

Pisces men are very non-confrontational, so when a Pisces man is done with you, he might tell you by not saying a word.

He doesn’t want to hurt you and he’s trying to avoid the awkwardness of directly breaking things off.

He thinks it will be easier on him and less painful for you if he simply drifts out of your life without an explanation.

He Committed to Someone Else

Because he is so sweet and considerate, a Pisces man’s friendliness could be mistaken for flirtation.

Your Pisces guy might be acting aloof because he’s already taken by another woman.

If he has already committed to a relationship with someone else, a Pisces guy won’t flirt with you or entertain the idea of infidelity.

He is a devoted partner, so perhaps you misconstrued his kindness for romantic attention. Don’t feel embarrassed if your Pisces guy pulls away because he has a girlfriend.

It could mean that he was starting to catch feelings for you and needed to withdraw for the sake of his relationship, or it means that he just wants to be friends.

As a highly emotional sign, Pisces men are prone to depression. One of the reasons your Pisces guy could be distancing himself is that he’s depressed.

You could try leaving a Pisces man alone when he’s depressed if he wants to be by himself to process his feelings, but you should still check in on him.

Send him a text asking him if everything is okay and if he would rather have company or be alone when he’s sad.

Everyone handles their emotions differently, so even if he is self-isolating, your concern and offer of company might be just what your Pisces man needs to hear to make him feel better.

Pisces men are very attached and attentive to their partners, and they hope for the same in return.

Your Pisces guy might be ignoring you because he’s hurt that you haven’t been giving him enough attention.

Maybe you haven’t spent enough time with him, planned any dates, or noticed when he’s upset or excited.

If he’s acting distant because he wants you to show him some attention, don’t think that ignoring a Pisces man back will teach him a lesson.

If you want to solve the problem, you need to shower him with affection and attention.

Tell him that you know you’ve been distracted lately but you want to show him how important he is for you. Then, plan a special night out alone with your Pisces guy.

Take him somewhere he loves and insist on paying. Bring him a thoughtful gift and lavish him with compliments and kisses.

When he sees that you’re making an effort to show him some appreciation, your Pisces guy will warm up to you again quickly.

You’ve Been Too Demanding

Pisces men are very generous in relationships. They give everything they have to their partners, including their time, energy, and money.

Although he doesn’t necessarily expect anything in return, your Pisces guy could be acting distant because he wants a little recognition for all that he does.

When a Pisces man goes cold, it could be a sign that you’ve been too demanding. Perhaps you’ve been ungrateful or taking him for granted.

If you suspect that your Pisces guy is pulling away because you’ve asked too much of him, scale back your requests.

Focus on what you can do for him instead of asking him to do anything for you. Relationships are all about give and take, so try to keep the balance and prevent the relationship from becoming one-sided.

Someone Else Needs His Attention

Because of his easy-going, empathetic nature, a Pisces man is in high demand. He probably has lots of friends, family members, and coworkers vying for his attention at all times.

Although they typically make their partners their first priority, sometimes Pisces men need to focus on other people, too.

Your Pisces guy might become suddenly distant if he needs to direct his time and energy elsewhere.

If his family or close friends need him, he will do whatever he can to help. He doesn’t want to leave your side, but sometimes he has to.

Instead of begging your Pisces man to forget the other people in his life and pay more attention to you, you should offer to assist him.

When his mom is sick and he needs to take care of her, make some soup for him to take her, or offer to go with him to help.

If his friend’s car breaks down on the side of the road and your Pisces man has to go help him out, offer to drive him there.

When he sees how gracious you are, your Pisces man will fall more deeply in love with you and will remember to give you plenty of attention later.

10 Easy Tips to Help You Date a Pisces ManWhat Happens When a Pisces Man is Upset?
Hello, I'm Liz