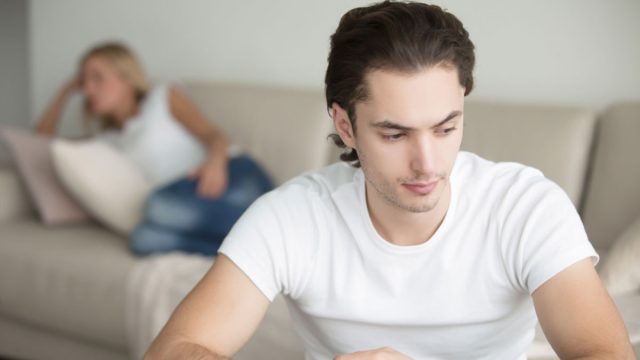 Are you concerned about your emotionally distant Aquarius man? Are you perplexed why your loving and caring Aquarius man has suddenly become distant?

If you have silently nodded your head in agreement to the above questions, you shouldn’t lose hope.

Aquarius men make great companions. They are friendly, entertaining, intelligent, and loyal. But like people with other zodiac signs, they also have some dark traits. And being emotionally detached is one of them.

The philosophy of life for an Aquarian is to be independent, and most of them won’t let anyone come close beyond a point.

Many women are frustrated when an Aquarian man blows hot and cold in a relationship. You need to act with tact if you don’t want to sever your connection with an Aquarius man.

At the beginning of the relationship, he may seem strong to you. He will buy gifts, plan outings, and make every effort to make you feel special. And then suddenly, he may stop and even pull away.

So, what happened to him?

The fact is that Aquarius men seem to avoid deep emotional connections. They may act warm and loving at one moment and cold and distant at another.

However, you should not be worried if you find an Aquarius man distancing himself after acting so caring and loving.

To understand why an Aquarius man suddenly becomes distant, you must get acquainted with the psychology of emotions.

You need to realize that people have different levels of emotional threshold. All of us have a threshold, beyond which we become overwhelmed by our feelings.

Aquarian men have a very low emotional threshold. They become disconformable when faced with intense emotions. That’s the reason they become distant.

Remember emotional attachment is not easy for an Aquarius man.

Being cold does not mean he is cold and emotionless. There may be several reasons why an Aquarius man suddenly becomes distant and detached.

An Aquarius man pulls away when in love when things are moving too fast for him. He will feel mentally stressed out when flooded by emotions.

Here is a quick scenario:

Imagine you have had a row with an Aquarius man over something. You let out your frustrations on him for about 30 minutes telling him what he did wrong.

While you will feel relieved after you have vented your feelings, you have flooded his system with negative feelings. He will feel distressed and completely burned out.

In order to calm his mind and regain his cool, the Aquarius man will become distant and detached.

2. Revert to a Normal Routine

Like all humans, Aquarian men also feel emotions. But due to being sensitive, they don’t enjoy them for long. Even positive feelings like love and happiness may seem overwhelming to them.

At the start, an Aquarius man may be in full gear in order to win your heart. But the fact is that he may not really be enjoying the feeling and acting that way to make you love him.

After a while when feelings seem to be too stressful to him, he may want to slow things down in a relationship. The first sign of taking things slow is becoming emotionally distant and withdrawn.

3. No Emotional Response from Partner

Sometimes, an Aquarius man will become distant because he may not be getting the emotional response he requires from a partner.

For an Aquarius man, emotional connection with a partner is a two-way street. He wants his partner to take initiative as well, and he doesn’t want to do all the work in a relationship.

Since an Aquarian man is emotionally cold by nature, he will revert to his subconscious trait if you are not responding to him. He will feel that he doesn’t need to please you anymore.

Remember that with an Aquarian, there is an auto gear in a relationship. If you want an Aquarian man to love you, you should take the initiative.

An Aquarius man may also become withdrawn if there is a lack of intimacy with the partner. While he may be unemotional, but like all men, he really cherishes intimate moments.

When the partner does not show any interest in intimacy, he will feel that he is not desired. Lack of romance makes him revert to his basic traits – being cold and distant.

Aquarius men tend to be inward focused. They focus more on internal thoughts and feelings instead of seeking external stimuli.

An Aquarius man is like a smartphone. He will need to lay back and recharge after feeling emotionally exhausted due to continuous emotional encounters.

He believes in the saying that absence makes the heart love more. While he might be in love with you, he will crave for some time alone.

The desire to be alone does not mean that he wants to end the relationship. He just wants some space and time to relieve the pressure.

6. You Are Being too Affectionate

An Aquarius man doesn’t feel at ease if the partner wants to spend too much time with him. It’s nice to feel needed. But if you can’t stop sending text, calling him, or giving presents, he will feel overwhelmed.

Aquarian men don’t want women to be affectionate all the time. They have some intellectual tendencies. Too much attention and affection will make them feel distressed.

This does not mean that he or want you to end the affectionate feelings. He may enjoy the feeling of being loved and treasured. However, too much affection makes him feel constrained.

Aquarius man silent treatment may not be because of a lack of love. An Aquarius man will retreat if you display too much attachment to you.

Sometimes, showing too much neediness is enough for him to suddenly become distant. It may be that he feels suffocated by the display of affection.

If you start to be too much affectionate, he will instinctively pull away and become detached. He will think that he will lose his freedom when he becomes committed to you.

7. He Wants to Give Time to Himself

An Aquarius man becomes distant if he thinks that he is not giving time to himself. He will feel he is losing touch with himself when he is around you.

You need to be understanding of his needs and let him devote time to favorite activities. This might be completing some project, partying with friends, or just playing video games.

Whatever the case, you need to give him some space so that he reconnects with himself.

8. He Wants to be With Friends

Aquarius men are highly social. They rarely can be found without a group of friends around them. If he is not able to give time to his friends, he may become distant and cold.

The need to be with friends arises from the innate nature of an Aquarius man to always have fun. He cherishes spending quality time enjoying with his buddies.

An Aquarian man cherishes the time spent with friends. He will prefer being friends than being in a relationship in which he is not allowed to be with his mates.

An Aquarius will ignore you if you set restrictions on him about meeting with his friends. You need to let him spend some quality time with his friends if you want him to stop being distant and cold to you.

Everything may be going well. You two find that you enjoy talking to each other and exchanging gifts. But then suddenly he becomes distant and withdrawn.

The possible reason for this action is fear of commitment.

Aquarian men feel that being in a relationship will mean an end to their freedom. As a result, they will be reluctant to enter into a committed relationship.

You need to give more time to him so that he can decide what is best for both of you.

An Aquarian man won’t want to rush things in a relationship. Aquarian men want to think things through. They don’t like taking quick actions.

He might act distant if he thinks that you are trying to rush thing. He wants to spread the relationship milestones over a period of years.

He may be happy with the relationship. But he may be afraid of taking giant steps. He doesn’t want to make big changes quickly and will ponder over the decision.

What Kind of Woman Attracts an Aquarius Man?Why is Aquarius Man Slow to Commit to a Relationship?
Hello, I'm Liz