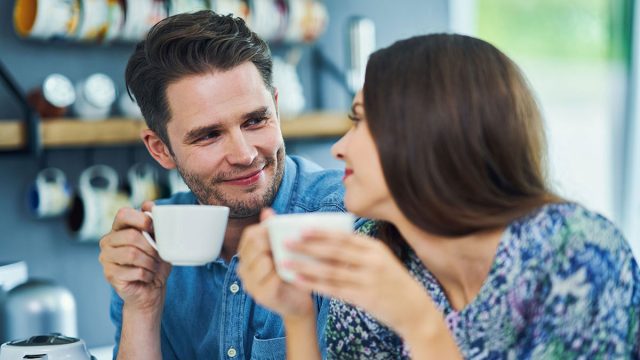 Even if an Aries man is shy, he’s still an Aries man! Keep that in mind when trying to date one.

If you’re dating a shy Aries man, you should still try to let him take the lead. Don’t pressure him, especially if he seems reluctant or more reserved than usual. Let him set the pace and try to let him plan dates.

You can, of course, flirt with your shy Aries man! Be direct and affectionate. Just don’t be too forward. He will still want to feel like he’s in control.

Never play games with any Aries man, let alone a shy one. Show him that you’re interested in him and hold his attention as much as possible.

Can an Aries man be shy? Most people don’t think of confident, assertive Aries as shy, but he definitely can be.

If you’re dating a shy Aries man, make sure that you never try to pressure him. Respect his boundaries and let him set the pace of your relationship.

Your Aries man will feel disrespected if you push him too hard when he doesn’t want to do something.

If your Aries man isn’t ready to take the next step in your relationship, you need to be okay with that. Either be patient or let him know that you two aren’t a good fit.

Your shy Aries man will feel much better when he can do things at his pace. Let him know that you’re willing to follow his lead. He will love being around you more if you do that.

Whether he’s shy or not, dating an Aries man sometimes involves just going along for the ride.

Aries men like to be in control. A shy Aries man, or one who is unsure about your relationship, might feel better if you let him plan dates most of the time.

If your Aries man is especially shy, you might need to let him know that you’re fine stepping back and letting him plan things. Even if he doesn’t speak up and tell you that’s what he wants, he’s likely itching to take control.

Your Aries man will start to feel more confident and less shy around you if you let him take control. When he plans a date, just go along with what he wants. If he’s letting his whims guide him, just enjoy the ride.

Tell your Aries man that you’d love it if he planned things, especially if he usually doesn’t. He’ll appreciate you taking the time to ensure he’s getting what he wants.

The Aries man’s personality is generally pretty confident. Even a shy Aries man will be confident, even if he’s on the quiet side.

You should also be confident when around an Aries man. If you confidently approach him and show interest in him, he might feel more confident flirting with you and pursuing you.

Aries men love confident, assertive women. This is true whether your Aries man is shy or not.

When you’re dating a shy Aries man, your confidence can often help him get out of his shell. He’ll easily be able to feed off your energy and match it.

Of course, you should still let your Aries man plan things and have control. Even a shy Aries man likes to lead. Just show him that you’re confident in your feelings for him, and he’ll feel more comfortable with you.

Shyness is not always an Aries man characteristic. Even if your Aries man is shy, you should still flirt with him!

The way an Aries man expresses shyness isn’t the same as others. He’s unlikely to completely shy away from people because he enjoys being around others.

He’s also unlikely to shy away from flirting. Aries men are still assertive and prefer to initiate things with people they are interested in.

You can show your Aries man that you’re interested in him by flirting. Whether you just started dating or you’re working up the courage to start doing so, make sure you show interest in him.

5. Ask Him About Himself

Are Aries men shy? Some of them are. Others just aren’t that talkative. Either way, you can typically draw an Aries man out of his shell by asking him about himself.

A shy Aries guy might not be very talkative. He may not always be forthcoming with information, so you’ll have to guide the conversation and show him that you want to get to know him.

An Aries man will likely enjoy telling you about himself whether he’s shy or not. Many Aries men love attention, especially from people they’re interested in.

You just need to show your Aries man that you’re willing to give him the attention he wants. A shy Aries man might not always demand attention like a more assertive Aries man would.

Ask your Aries man about his job, interests, hobbies, and anything you else can think of! He will appreciate it.

One of the best tips for dating an Aries man, whether he’s shy or not, is to make sure you never let him get bored.

Aries men get bored quickly. They are action-oriented people and like to constantly be on the go.

Your Aries man is unlikely to be the type who wants to sit at home all the time. He’ll need to relax now and then, but his idea of fun usually involves physical activity or going out to try new things.

If your Aries man is shy and not very talkative, he might not always tell you when he’s getting bored. You’ll have to keep an eye on things and make sure you do activities he enjoys.

Make sure you always check in with your Aries man and ask what he wants to do. He might not always speak up, but he’ll step away if he gets bored. Make sure it doesn’t get to that point.

An Aries man in love will show you a lot of affection. This might be more difficult for him if he’s shy or unsure about your feelings.

When your Aries man shows you affection, accept it. Don’t turn him away unless you genuinely do not feel that way about him.

A shy Aries man may stop showing affection if you reject him too often without reason. He’ll start to feel like you don’t appreciate his affection or aren’t interested in him.

If you’re not that physically affectionate, just let him know that! Your Aries man will be understanding, and he’ll try to figure out a way to show you affection in a way you’ll both appreciate.

No matter what your relationship with an Aries man is like, you should always be direct and honest with him. Aries men hate trying to figure out hidden meanings behind the things people say.

An Aries man who isn’t a big fan of conversation will not enjoy talking to you if you always talk circles around him.

If you want to keep dating your shy Aries man, be straightforward. Don’t make him guess what you mean.

Why should you be direct with your shy Aries man? He likely doesn’t chat with everyone around him. If you want him to talk to you, make it easy for him!

When there’s a problem, address it head-on. If you need something from your Aries man that you’re not getting, just let him know.

No Aries man wants to decipher everything you say to him. A shy Aries man will be even more turned off if you can’t be direct with him.

9. Don’t Play Games With Him

Most Aries men don’t have time to play games. An Aries man will gladly chase you if you’ve shown interest, but he doesn’t want someone who will constantly play with his emotions.

Get to know him before playing hard to get or being coy to try and make your Aries man chase you.

It’s all about balance. You can be a little mysterious and keep things interesting, but you still need to make sure your Aries man knows you want him to chase you.