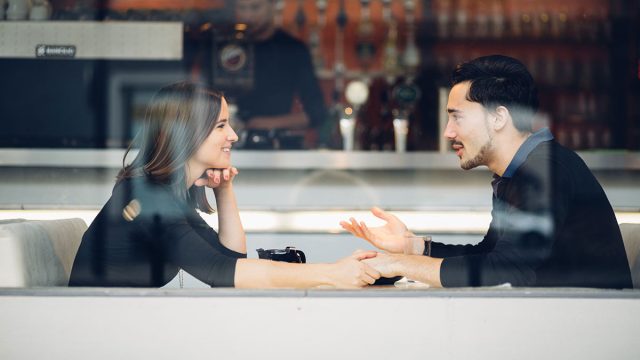 Chasing a Virgo man may seem like the best way to let him know you care. This can backfire.

If you want to know how to make a Virgo man happy, remember the phrase “less is more.” This is his key to attraction.

If there is one thing a Virgo man is obsessed with, it’s order and perfection. He wants everything to run like clockwork. Being pursued makes him feel less secure, not more.

If you pursue him, he’ll feel like he’s losing control of his schedule and choices. He’ll feel like you are intruding into his life. This will not leave the impression you want.

If you see obvious signs a Virgo man likes you, still be patient. A Virgo man in love likes to call the shots. He’ll schedule you in at his own pace.

If you’re wondering how to get a Virgo man to fall for you, the key is to take it slow and not put any pressure on him. A Virgo man downplays his attraction. He won’t go to great lengths to publicly show his interest.

The more you keep cool and stay grounded, the more reassured he’ll be. Virgo men love being in control more than anything else. They’ll even forego a great relationship if they feel like it interferes with their sense of control.

A Virgo man, when he likes a woman, will slowly but steadily start to include her in his life. He’ll make time in his weekly schedule for calls and dates. He won’t go overboard. He’ll take consistent but small steps.

He wants to set the pace. Even if you think it is normal to see each other more frequently, trying to do this before he’s ready will be detrimental.

What He Thinks if You Chase

If you initiate contact once in a while he won’t mind. But if you are always the one to call or text first, if you actively pursue him, he’ll get the wrong idea. He may jump to conclusions you don’t want.

If you chase a Virgo man, he’ll think a few things may be true, and none of these assumptions are what you want. He’ll think you’re too impulsive, that you haven’t gotten to really know him yet.

He’ll think you’re emotionally unstable or needy. He’ll feel you are too demanding of his time or not respecting his boundaries. He may think that trying to rush the relationship is a sign you’re not the one for him.

He may assume you’re trying to control his life or push to get him to change his routines so you can be together. This will make him uncomfortable and he’ll think the relationship will never work.

He’s Not a Passionate Pursuer

Signs a Virgo man is falling for you are not what you may think. He won’t show his passions as he makes a display of his feelings for you. Virgo men are sensible and practical. They keep emotions far off and focus on logic.

He may be subdued and modest, but he’ll show his love in other ways. The more a Virgo man tries to consistently be in your life, the better a sign it is that he really loves you. He is conscientious and helpful.

When he loves you, he may actually start acting like a very good friend with just the tiniest hints of flirtation. His style of pursuit will be practical. He’ll constantly show up in your life to fix things or help you.

If you’re wondering how does a Virgo man test you, the truth is he doesn’t. At least not intentionally. A Virgo man does proceed with caution though. He is not duplicitous enough to test or play mind games.

Instead he will adhere to his usual high standards and gauge your reaction. If you easily keep calm and act rationally, in spite of your strong feelings, he’ll know you’re the one for him.

If he sees signs that your passions overrule your sensibilities, he will be turned off by this. He’ll assume that a relationship with you will involve too much drama. A Virgo man won’t tolerate intense emotions because he doesn’t easily deal with feelings.

The secret to how to make a Virgo man chase you after a breakup is to be subtle. The more you encourage a Virgo man and invest in his interests, the more he’ll come toward you.

The more you show him you are sensible and grounded, the more interest he’ll take in you. The more you let him feel like he is in control, the more encouraged he’ll feel to take the next steps.

Another way to help a Virgo man move toward more serious commitment is to inspire him. Virgo men are very intelligent and they love to fix things and solve problems.

They are resourceful and can improvise when it comes to practical things. Yet their creativity is often limited by their own concrete thinking. If you can match his intellect and show him you’re on the same page, you can inspire a Virgo man.

Help him stretch further into his creative, inspired mindset. He prefers to stay in the efficient and logical frame of mind where he is comfortable but sometimes he gets stuck there. A Virgo man knows this.

When you are able to inspire him to come up with new ideas, inventions or solutions to problems, he’ll feel inspired and want to be around you because of the effect you have on his thinking.

Know How to Apply Leverage

The key to understanding how to make a Virgo man miss you lies in knowing how to apply just the right leverage. If you overdo it, you could undermine your goals. He needs to feel in control.

Yet he also has instincts to be helpful and to be of service to you. In addition, he is a man who takes rules and boundaries seriously. This is where the leverage comes in.

Rather than setting strict ultimatums, let your Virgo man know that you have rules and boundaries of your own. Keep him wanting more so he’ll pursue you. Adhere to your own boundaries.

Don’t cancel all your plans to make room for him. Fit him in to your busy schedule. He’ll actually feel more important this way. Ask for help with practical things like repairs when you need it. Let him feel important and useful.

Less is More When You Pursue

If the occasion should arise when you have to initiate contact or reach out first, treat this like adding salt to a recipe. Just a sprinkle here and there. Not too much at once. When you do pursue, keep it brief.

Keep texts or phone calls short. Also keep your communication focused. Have a purpose and an agenda when you reach out. Ask for his advice, tell him something broke and you would appreciate his help fixing it. Don’t pursue him to flirt or be silly.

He’ll think you are becoming a drain on his time and energy. Instead, show respect for his time and boundaries and only initiate extra contact when it is urgent. Keep it logical, polite, focused and unemotional.

What to Do if He’s Moving Too Slow

At some point you’ll no doubt feel like he’s moving much too slow. Even when you try to be patient, you may wonder at times if there is anything you can do to jumpstart the relationship.

You need to understand how to make a Virgo man miss you. If he likes you, he’ll routinely schedule you into his life. He may not talk about it much, but he really looks forward to the time you spend together.

After a while, he’ll just assume you will continue to be part of his schedule and your time together becomes routine. This is comfortable for him even though for you it may feel like too little and not often enough.

Use this technique sparingly, but once in a great while if you want to make him miss you, find a practical and serious reason to have to postpone your time together. Explain you were looking forward to seeing him as well but that something urgent came up.

Offer a follow up date but not too soon in the future. This will give him time to miss you because you won’t be together for a regular interval that he’s used to.

The Attention He Likes

In general, a Virgo man doesn’t like to be the center of attention. However like all people, he does have a soft spot for certain kinds of attention. The more he receives this kind of attention from you, the happier he’ll be.

Giving him the kind of attention he likes will keep him coming back for more. It’s not what you may assume. He isn’t going to be flattered by compliments to his physical appearance because this is superficial and he knows it.

Yet if you flatter him by admiring his brain, his skills, his accomplishments and all the things he does to repair, invent, fix, analyze, build and generally manage practical matters, he’ll take notice.

Virgo men are hardworking and efficient. They do what they feel is right because they have a strong sense of duty, not because they seek praise and recognition. Yet if you recognize his accomplishments he’ll feel good around you.

He’ll be glad you noticed his effort. Also, take an interest in his hobbies and intellectual pursuits. He’ll be impressed that you take his favorite shows, games and hobbies seriously.

What Will Turn Him Off

There are other forms of attention a Virgo man doesn’t want. He doesn’t want to be in the spotlight related to anything controversial or dramatic. If you make a big deal about him but he feels it is false flattery, that is a turn off.

He doesn’t want a lot of attention in public. Don’t be too flirty or demanding of affection in public or he will feel uncomfortable. Basically, a Virgo man never wants to feel like he’s on display.

He also keeps his business private. He doesn’t want the attention that comes from other people knowing his private thoughts and feelings. Keep his confidences if he lets you into his private world.