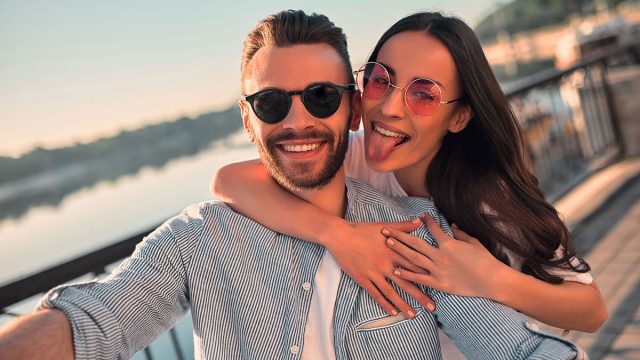 Chasing a Pisces man can be just what you need to do to kickstart a relationship. But you have to know the right way to pursue him.

If you pursue him under the right circumstances, it can work like a charm. You have to pick your timing.

How does a Pisces man test you? He will step back and watch before he makes a move. This is why it’s important to be patient. Let him see that you are interested, then step back.

Pisces men feel flattered when they are pursued. Yet this has limitations. He won’t want to feel overwhelmed by you. A Pisces man who likes you will wait for the green light before moving forward.

When you care about a Pisces man, you need to make it clear. Pursue him in the beginning but then switch it up periodically throughout the relationship.

He Lets You Initiate

What does a Pisces man find attractive? He loves it when a woman is as sensitive and caring as he is but also has a more courageous personality. He needs you to initiate. If you are as shy as he is, the relationship may never get off the ground.

A Pisces man always overthinks things. His moods determine his sense of security. When a Pisces man is in a good mood, he will trust in your attraction to him and will be optimistic. He may take bold steps to chase you.

Yet when a Pisces man is stressed or insecure, he will become reluctant to open up. He may question himself again and again or replay every conversation, trying to discern if you’re just being nice or really into him.

When you initiate, it becomes clear to a Pisces man that you are interested. This can keep him from stalling in the relationship. He may need you to be patient as you continually coax him out of his shell. Yet you can make it clear that you like him at first.

He won’t usually make the first moves. This is partially because he likes being chased. But it’s also a practical strategy. By the time a Pisces man is an adult, he’s already been rejected numerous times.

Pisces young men will be more adventurous and initiate. In fact, they will go to extremes to show their amorous side. They will copy their favorite romantic movies. Yet after he misreads a woman’s signals a few times, Pisces men will become more cautious.

A Pisces man who experiences a few rounds of rejection after convincing himself that he’s found his soulmate only to realize too late that the woman of his dreams isn’t into him, will learn a valuable lesson. Not to make the first move.

In high school, his impulsivity can cause pain and rejection. So as an adult, he will think twice before wearing his heart on his sleeve. A Pisces man will wait to see if you show signs of attraction first.

He Likes Being Pursued

A Pisces man likes being pursued. It’s flattering to him to see that a woman will chase him. Also, Pisces men can be lackadaisical when it comes to putting forth the effort needed in a relationship.

It is sometimes a matter of his own complacency or laziness, not just his passive nature. A Pisces man will want to be pursued because it takes the initial work out of his hands.

Pisces men love the reassurance of being pursued in a relationship. It helps him feel comfortable that your feelings haven’t changed. Strange as it seems, a Pisces man will doubt your feelings because he reads too much into little signals.

This is a facet of his intuition gone wrong. If you’re slow to text him back, he’ll assume it is because you’re suddenly mad at him. He’ll think you’re trying to give him a hint. Even if this is not the case, he’ll talk himself into doubting the relationship.

Initially, chasing a Pisces man keeps him feeling more secure. He becomes more comfortable in the relationship because he will feel like you are constantly feeding his need for affection and attention.

Pisces men don’t crave the spotlight, they can be introverted. But in a relationship, a Pisces man does crave reassurance and connection. Even to a degree that most men would find overwhelming or suffocating.

Even though a Pisces man has a higher tolerance for clinginess in a relationship, doesn’t mean he doesn’t have his own limits. You need to know how to keep a Pisces man wanting you. This means balancing chasing him with letting him breathe.

Pisces men don’t like to take too much time away when they’re in love. When you know how to understand a Pisces man, it will be clear that it’s best to occasionally step back and not always pursue him heavily.

This is important because it gives him a chance to miss you and it also balances out the effort you are both putting into the relationship. What happens when you ignore a Pisces man? Initially, this will bring much needed balance to the relationship.

But if you ignore him for too long, he’ll become anxious. He’ll convince himself that there is a need to be worried about the relationship. A Pisces man, when he has feelings for you, will take initiative when you give him some space.

If you are wondering how to make a Pisces man miss you like crazy, you need to occasionally let him be. When he has some down time, it gives him a chance to miss you. But you don’t want to give him too much time alone.

A Pisces man will take initiative and show you he cares when you step back periodically. Every once in a while, don’t answer his text right away. From time to time, plan a day out with friends and be unavailable.

When you step back occasionally but not too often, a Pisces man will become more responsive. This can also be more empowering for him as he will not feel overwhelmed in the relationship. Yet you need to be careful about how often you use this strategy.

When a Pisces man is interested in you, he will show it in romantic and sentimental ways. He’ll try to make every day feel like a holiday. Just because he is starting to initiate more, however, doesn’t mean you are in the clear. He still wants to be pursued.

Once you know how to make a Pisces man miss you, don’t let him linger for too long. Remember to show him you are interested in him even when you’ve been at a distance. Text romantic quotes.

Follow him on social media and interact in a flirty and friendly way. When he expresses his interests in certain activities, take it a step further and suggest doing some of these activities together.

Pisces men are more comfortable with abstract ideas. When you hear him talk about what he loves, make a concrete plan to make his dreams come true. This shows a Pisces man that you are really interested in him.

It also helps him feel confident in you as his potential partner. He will start to understand that you, as his partner, will help him achieve his dreams by keeping him grounded and focused. Just be careful not to do this in a micromanaging way.

For a Pisces man, there is a fine line between being overbearing and being supportive. Show your Pisces man that you have an interest in helping him explore his hobbies.

One of the less flattering reasons a Pisces man loves to be chased is because he is not good at setting boundaries. When he’s in love, he wants to be completely immersed with his love interest. He doesn’t know how to pace or limit himself.

When you pursue him, it helps him to feel fulfilled and appreciated. It also reminds him of his boundaries. This is because he will easily want to spend every moment with you, until it starts to become too much.

Left to his own devices, he won’t understand what his limits are. But when you pursue him, you help a Pisces man remember his own limitations. This helps him find the right balance to not burn out in the relationship.

When a Pisces man chases you, he may easily step over limits and ignore boundaries. A Pisces man won’t realize when he’s overwhelming you. This is one of the reasons you need to have a balance between when you chase him and when you step back.

Sometimes, you have to set the boundaries for a Pisces man. If you leave it up to him, he’ll chase you but then burn out. It’s best to set the pace by knowing when to pursue and when to cool off. This gives him a much needed break before he knows he needs it.

If you’re wondering what to do when a Pisces man backs off, this is a time to give him a brief break, then pursue again. Even if your strategy vacillates, more often than not, let a Pisces man chase you.

What is The Weakness of Pisces Men?Things You Need to Know When Dating a Pisces Man
Hello, I'm Liz