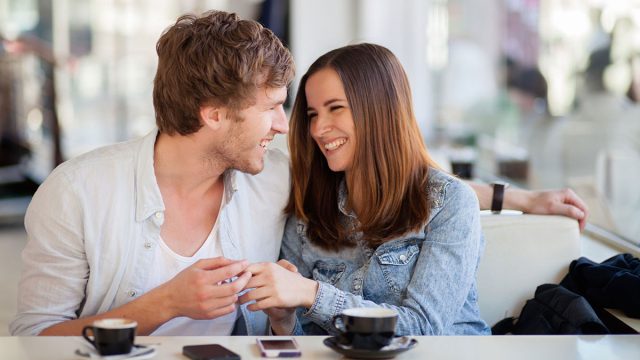 Aquarius is a complex fixed air sign and men who hail from this sign even more so.

An Aquarius man is strange, unpredictable, and likes to run wild. You will hardly see them settling down, and it’s not because nobody has tried to rope them in. The man always manages to smell impending captivity and runs away.

If you manage to catch their eye, they will not hesitate to take a step forward and introduce themselves. They are way too curious to hold back.

But you doing the same can be a turn-off. And that is because they are low-key Alpha males who like taking the lead.

He Is Dominant – He Does the Chasing

Aquarius men aren’t the traditional kind of dominant, and they are definitely not attracted to meek, submissive women. However, they are quite particular about how they would like things to unfold.

Initially, an Aquarius man likes to hold all the cards. He is in full-on judge mode, especially if he is attracted to you and is in it to win it.

The fixed air sign is an intellectual soul who is drawn to intelligence and captivated by confidence. Make sure you display both in abundance if you want to get him to ask you out.

They aren’t the shy types and will approach you if they like you sometimes under the pretense of friendship. If they do, then know they are displaying signs an Aquarius man is interested.

Aquarius men enjoy getting to know people. In particular, your crush will try to pick apart your brain and understand why you think the way you do. He is more interested in your ideologies than anything else.

If he finds you intriguing enough, he won’t know how to hold back. However, he will only chase you until you can manage to keep him on his toes. Keep things light and interesting to keep him coming for more.

This secret technique any woman can master will make an Aquarius man fall in love with just one kiss!

If an Aquarius man is not interested, nothing you say or do will lure him in. However, you trying too hard is a sure-shot way of pushing him away. By too hard, we mean chasing him in any way.

Don’t call him, don’t text him, and don’t seek him out after the first date. He likes to make the moves on his own time. Progressive Aquarius is quite traditional when it comes to initial dating.

For them, the start is all about getting to know each other. Don’t expect hearts and flowers, and don’t push him for such romantic gestures.

He will offer nothing more than companionship in the beginning, and the first few dates will be relaxed and carefree just like him. It’ll feel like hanging out with your guy best friend; you should savor that moment.

If he’s seeking you out to take you on trips, he’s displaying signs an Aquarius man is falling for you. Enjoy the first three to four dates that he plans and maybe reach out to him for a fifth date.

Getting an Aquarius man to chase you is not really difficult. Just play a little hard to get, don’t act overly excited and interested, and he will be chasing after you.

Do not rush things ever. Patience is what attracts Aquarius men, so display a lot of it. Relationships with Aquarius do not unfold as traditional ones do. There will be attraction and displayed interest but also a tone of reservation.

Let things unfold at the pace the Aquarius decides. It’s their way of trying to protect their heart. You may not find the answer to how to know if an Aquarius man is serious about you in the beginning.

His actions will speak for themselves later on in the relationship. He will take care of all your needs and be there for you whenever you need him to.

His willingness to accompany you wherever you take him is how Aquarius man shows love.

If you want to have him continue chasing you, take your time getting to know him, and don’t be too eager to give what you two have a name. Stay away from the word commitment until he makes it official.

When your Aquarius man is ready, he will introduce you to his friends and family as his girlfriend. Before then, don’t push him into accepting what he’s not ready for. You may push him away by doing so.

If anything, that is the one trait that they hate the most. Pretentiousness and jealousy turn off an Aquarius man like nothing else. They are attracted to women who are confident and not those who are petty.

Aquarius men have various female friends. No surprise there as they are natural charmers and great listeners. They’re often called upon by friends to solve various relationships and work-related issues, and they enjoy that.

Aquarius men like being wanted, not only by their partner but also by their friends. If you want to commit to an Aquarius, then be ready to keep your insecurities in check.

He will hang out with his female friends quite often, and you won’t always be there. Such situations will put your patience and trust to test, so be mentally prepared for them.

Don’t display signs of jealousy, or your man will run away and never return. Your emotional display will make him feel caged, and that’s a feeling he avoids at all costs.

Be Strong and Independent

Be your own woman. Independence is incredibly attractive to Aquarius men as they greatly value their own. They also find co-dependent relationships incredibly toxic and avoid them at all costs.

Want your Aquarius man and seek him out in times of need. He will never disappoint you. However, take time apart from him and enjoy it. He needs a break sometimes.

Having to deal with the pressure of your expectations may push him away. Aquarius men are not fans of rescuing damsels in distress and will avoid relationships where they have to play the fairy godmother role.

If you want to be an Aquarius woman, you need to be strong and independent. Have a problem-solving attitude and shy away from whining and complaining.

You taking the initiative and taking charge of a situation is a lot more attractive then you crying buckets over lost opportunities and uncertain situations. In fact, Aquarius men respect independent women.

Occasionally, take some time out and hang out with your friends. Don’t text him and give each other a break. Time off is the answer to how to make an Aquarius man miss you.

Here distance makes the heart grow fonder. Don’t be so dependent on him that he may feel guilty taking time off as that’ll get on his nerves very quickly.

For him, love is all about being your person, but coming together to be an amazing team and team members often need some time out to let off steam.

Like your best friend is how an Aquarius man acts when he likes you. He will want to know all about you and will go to great lengths to become the person you call when in need.

Aquarius men like to feel wanted in a relationship. He will want to be the shoulder you seek to cry on and the person you call to share a funny anecdote with.

Not only will he want to become your best friend, but he will make you his as well. Expect a random visit as he may show up with take-out and drinks to enjoy a football game or watch Netflix together.

Being there for him silently but strongly is the answer to how to make an Aquarius man chase you. They want to date their best friends, so be his friend first before you hope for something more.

Friendships hold the utmost importance in an Aquarius’s life. Having good friends is an integral part of their survival mechanism. They have a group for each one of their moods.

Aquarius men have their casual hangout friends group who they call for a night full of fun. They have their intellectual group of friends who they reach out to for stimulating discussions.

They also have various random groups that they reach out to when seeking variety. However, as their partner, you should make your way into their close friends’ group.

Aquarius men only really let a handful of people in their personal lives. Know you are important if you’re one of them.