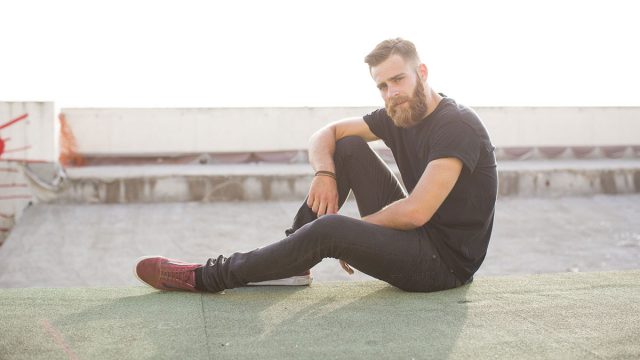 Capricorn man traits can be hard to understand. Even when he’s in love, he’ll act aloof and send mixed signals.

Yet when you understand his personality, you’ll realize that a Capricorn man’s personality is unlike that of any other man.

What attracts a Capricorn man? The answer may surprise you. Unlike other guys, he’s not swept away by romance and appearance. You’ve got to appeal to his practicality.

A Capricorn man is exceptionally ambitious and can be materialistic. Yet he can also be frugal and resourceful. He’s no stranger to hard work and this can help or hinder him in relationships.

Capricorn man traits in love can be subtle. If you don’t understand his personality, you’ll miss the signals he’s showing you. You won’t realize he’s falling in love with you.

When it comes to Capricorn traits, males and females born under this sign are among the hardest working people in the zodiac. Capricorn men will often hide in their career ambitions. Even when in love, a Capricorn man will dive into work.

His reason being that if he works hard enough, he’ll easily be able to create a rewarding life for you. What he overlooks, however, is that all his time working can also erode the foundation of the relationship with you.

Too much time at the office can make a woman feel rejected by a Capricorn man. Yet deep inside, he’s spending so much time at work because he wants to provide a comfortable life for you.

When a Capricorn man is trying to avoid dealing with a failing relationship, he’ll also dive into work.

Thus, when he’s trying to make a relationship work and when a relationship is falling apart, his reaction will be the same. He’ll bury himself in work and may not be emotionally available.

A Capricorn man’s negative traits are often the mirror image of his most positive traits and this can be confusing to women who love him. He may seem uninterested or he may hide conflict in a relationship by investing too much in work.

When a Capricorn man kisses you, you know he’s seriously in love. Capricorn men don’t flirt needlessly. They reserve affection for those who matter to them.

Capricorn men have a serious streak. They tend to take all matters in life as crucial. This is not to say they can’t have fun as well. Yet expect a Capricorn man to prefer work to play.

He may also have a dry sense of humor. If you joke around with him, he’ll take you at your word at first, long before he realizes you’re just kidding.

He’s usually serious about his work and also about his hobbies. He may be attracted to interests that allow him to accentuate his serious nature.

Never make light of a Capricorn man’s interests. If you do, he may become offended. He will be more receptive to your affection if you first take his opinions and work as seriously as he does.

One of the most prominent Capricorn traits is his maturity. Even as a child or young man, Capricorns are wise beyond their years.

They are often concerned about matters that deal with security and tradition. They may even appear older than they are.

A Capricorn man’s maturity is one of his most notable features. You can count on him to be practical and grounded.

He’s nurturing but he doesn’t get carried away by whimsical desires. Instead, he has a mature view of his responsibilities to others.

Capricorn men also seek maturity in their partners. A Capricorn man will be turned off by childishness or drama.

If you have a secure foundation and reliable personality, a Capricorn man will be attracted to you. He usually wants to skip the frivolity of dating and settle down as soon as he is sure a relationship is secure.

Capricorn is a sign ruled by the planet Saturn, which is the planet of time and karma. As a result, men born under the sign of Capricorn have a gift for good timing.

He always shows up on time and never overstays his welcome. He may arrive in your life just at the right time for a relationship.

He also has a keen sense of timing when it comes to settling down. If he doesn’t feel he’s ready, nothing you do will change his mind. Never keep a Capricorn man waiting. They judge timeliness as a sign of respect.

If you are prompt and on schedule, a Capricorn man will be more secure with you. He may even become more attracted to you.

One of the Capricorn man’s falling in love signs is his tendency to show up like clockwork, habitually contacting you at the same time daily. This is a sign he really cares.

Wondering how to make a Capricorn man obsessed with you? Exude traditional sentimentality and romance.

Capricorn men can’t resist women with traditional values. If you have a strong sense of values and traditions and take an interest in your Capricorn man’s traditions, he’ll gravitate toward you.

If you are traditional, demure, conservative and patient, you’ll align well with the top traits of a Capricorn man. In contrast, if you are too assertive, brash, bold and rebellious, you’ll turn a Capricorn man off.

A Capricorn man in relationships will often subscribe to traditional gender roles. He may act chivalrous and insist on picking up the check and holding the door open for you.

He doesn’t intend to be suffocating or controlling. Instead, he uses such gestures to express his ideals of how a gentleman should act when courting a love interest.

Are Capricorns stubborn? Yes, and often it pays off. Though it can also irritate the people closest to them.

Capricorn men can be unyielding. Yet their stubborn nature can also be a part of their charm. This is especially true when it comes to following their ambitions.

Capricorn men are obsessed with career and financial success. They will stop at nothing to climb the corporate ladder. Yet Capricorn men aren’t greedy, specifically. Instead, they are concerned with material security.

A Capricorn man will try to achieve career success and use his ambitious nature in order to make sure he can establish a solid baseline for his family and loved ones.

He reasons that the more successful he is, the better able he will be to take care of the people he loves.

For all the challenging aspects of a Capricorn man’s personality, one of his greatest strengths is his patient nature.

A Capricorn man will wait a lifetime if he needs to. He believes that it is better to win the race by taking a slow and steady approach.

No matter how urgent a situation may be, a Capricorn man will operate at a snail’s pace in order to make sure he gets everything right.

He is diligent and meticulous, and he can outlast anyone else because he’s got a gift for patience and persistence.

This patience can be a source of frustration when it comes to relationships, however. Capricorn men are patient enough to want to wait for a good opportunity to ripen. He’s not one to rush to the altar but instead prefers to take his time.

By the time a Capricorn man is ready to get serious about a relationship, his love interest may already have become burned out.

You may assume he’s not interested and start to move on by the time a Capricorn man finally decides he’s ready to commit.

You can set your watch by a Capricorn man. He is reliable and dependable. When he gives his word, he considers it as serious as a blood oath.

At the same time, a Capricorn man won’t guarantee anything unless he is certain that he can follow through.

If he has any doubts about his ability to be a steady presence in your life, he will make this clear. A Capricorn man will never make a halfhearted effort.

When he’s into you, he’ll be a steady and consistent presence in your life. You’ll be able to count on him no matter what.

While you can count on a Capricorn man for almost anything, the one thing he won’t usually be able to do is express emotional vulnerability.

Yet when it comes to practical matters, you’ll be able to rely on him to be there for you. Capricorn men are honest and dependable.

A Capricorn man’s dislikes include emotional displays. He can be sentimental and romantic but he prefers to keep a low profile. If you are highly emotionally expressive, it can make a Capricorn man feel overwhelmed.

Because of this, Capricorn men can seem detached. If you don’t understand this to be one of his core personality traits, you may assume your Capricorn love interest is not interested in you.

You may misread his signals and assume he’s cold or indifferent toward you.

Yet this is not true. Capricorn men are naturally objective, practical and detached. They push emotions aside and prefer to deal with concrete facts. This is a part of his perspective and is not a measure of how much he cares about you.

A Capricorn man’s tendency to be mature, serious and responsible can come at a cost. Capricorn men have a cynical nature.

He needs to see the cup as half empty so that he will be prepared to refill it when needed. As a result, Capricorn men seldom fully relax.

They may assume the worst and have a pessimistic view. Yet they are seldom disappointed because they don’t have idealistic hopes.

When a Capricorn man is in love, his cynical nature may ease slightly. Yet he won’t be one to look at the world through rose colored glasses.

When you understand the cynical aspect of a Capricorn man’s nature, you’ll be better able to accept his tendency to criticize or think the worst.

He’s not actually trying to discourage you. Instead, he’s trying to keep himself grounded in reality by imagining the worst case scenario.

What Happens After a Capricorn Man Breaks Up with You
Hello, I'm Liz