How Do You Get a Capricorn Man to Text You? 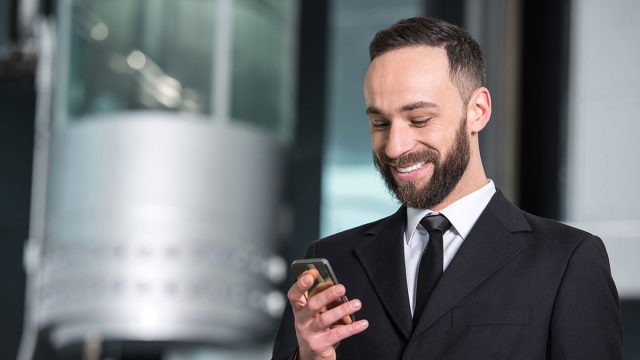 If you’ve been anxiously staring at your phone screen waiting to hear from a Capricorn guy, you need to learn how to make a Capricorn man text you.

How do you get this reserved, stoic sign to communicate?

If you want to get a Capricorn guy to text you back, you have to know what kinds of messages are sure to elicit a response from him.

The zodiac signs have different ways of expressing themselves, so it’s important to understand your Capricorn crush’s communication style.

When you learn more about his sign’s typical personality traits and how he likes to keep in touch, you will know how to get a Capricorn man to text you.

If you’ve just exchanged phone numbers with him and he’s not texting you right away, don’t assume it’s one of the signs a Capricorn man is not into you.

He likes to be the pursuer in romantic relationships, but he is also quite reserved. He probably wants to text you, but is too nervous or wants to wait a few days.

Go ahead and make the first move by sending him a text message. You could send him just a simple greeting to encourage him to message you back.

Or, even better, you could send him a question to get a conversation started and give him something to respond to.

If you met him at a concert, for example, you could say, “Hey, it was really fun meeting you last night! What did you think of the show?”

Don’t ask him out right away with your first message, as this may come off as too aggressive. You can send the first text, but let him be the one to ask you on a date.

When you want a Capricorn guy to text you back, you need to keep your messages short and to the point.

He is a busy guy, and he doesn’t like having long or important conversations through text messages. If you text him a question, he might only respond with a yes or no answer.

Don’t be put off if his responses seem short and abrupt. He’s not the most talkative guy, and he values efficiency over flowery language.

If he is bothering to text you at all, especially during work hours, it’s one of the signs a Capricorn man cares for you.

He’s not the type of guy to lead a woman on if he’s not really interested in her, so if he’s texting you anything, no matter how few words or characters, it’s a good sign.

If your Capricorn man stopped texting you back, the reason could be as simple as he doesn’t think your messages require a response.

He is a very straightforward and direct guy, so unless your message contains a clear question, he might not think he’s supposed to say anything back.

Texting also isn’t his preferred method of communication. He would rather spend time with you in person so he can really get to know you.

Use texting as a way to make plans to meet with your Capricorn guy instead of trying to figure him out over the phone.

Text him a direct question about your date, such as what time you should get together and where, and he will surely text you back.

A Capricorn man dislikes it when anyone texts him long paragraphs or sends multiple messages in a row with no response from him.

If he has to scroll through your messages, you’ve texted him too much. He won’t respond until he has read every word you’ve sent and formulated an answer to each message.

Don’t overwhelm him with texts if you want a response from your Capricorn crush. Try not to send more than one or two messages at a time, and then wait for him to say something back before texting anything else.

Although he comes off as strong and stoic, you might be surprised by how insecure a Capricorn man secretly is.

That’s why it’s important for you to compliment your Capricorn guy and boost his ego if you want him to keep messaging you.

If you’re wondering how to compliment a Capricorn man in a way that makes him text you back, you need to be sweet and sincere.

He’s not interested in hearing obviously false flattery, so don’t make him distrust you by saying hyperbolic things like he’s the most handsome man you’ve ever seen in your life.

Instead, text him something thoughtful and unique, like how you love how self-motivated he is and how much you admire his work ethic.

Your Capricorn man will eagerly look forward to hearing from you when you text him kind words, and he will most likely text you back a few compliments, too.

Capricorn is known as “the Father” of the zodiac, so a Capricorn man seems like an old soul with a great deal of wisdom to impart.

If you want to know how to text a Capricorn man in a way that guarantees a response, ask him for advice.

He loves sharing his opinions, but he’s not the type of person who says everything he thinks without being asked.

It flatters him when you ask him for advice, and it gives him a direct question to respond to in a text message.

He’s quite intelligent and he won’t steer you in the wrong direction, so you will get some helpful advice out of it, too.

Every zodiac sign belongs to one of the four natural elements: fire, air, water, or earth. A sign’s natural element tells us about that sign’s personality and disposition.

Capricorn is an earth sign, and earth signs are known for being steady, stable, and reliable. When a Capricorn man likes you, he will text you consistently.

However, if he normally texts you every day and suddenly goes several days in a row without talking to you for no apparent reason, it could be one of the signs a Capricorn man is losing interest in you.

If you want to keep him texting you back, you should be as consistent as he is with your messages.

If you usually text him every day to say good morning or good night, don’t stop doing it just to test him or make him sweat.

He wants a woman he can count on, so your steady messages will impress and please him.

If you are wondering, “What does a Capricorn man find attractive in a woman?” The answer is that he likes a lady who leaves a few things to the imagination.

He likes a reserved, mysterious woman because he enjoys getting to know her slowly and unwrapping all the layers of her personality.

You shouldn’t text your Capricorn crush to tell him your every move. Let him wonder what you’re doing all day without him.

If he asks you on a date and you’re not available because you have plans to see your grandmother, just tell him that you’re busy and suggest another time instead of giving him your entire schedule and family history.

Save that information for when you see him in person, and don’t reveal everything about yourself all at once.

Let him see what a complex, enigmatic lady you are by withholding some information over texts and allowing him to figure you out slowly.

Also, if you want to text him some sexy photos, take a picture of yourself wearing a classy dress or at least lingerie.

Don’t show him everything in a picture, and instead, just give him a small taste of what he will get when you see him in person.

Some zodiac signs are needier than others in relationships. A Capricorn guy is very independent and he can’t stand having a clingy partner.

Even a Capricorn man in love doesn’t need to text back and forth with his partner all day.

If you are wondering how to get a Capricorn man to chase you, you need to give him time to think about you and miss you when you’re not around.

When he’s having a night out with his friends or is taking some time for himself, don’t send him a bunch of text messages and act needy.

Text Him About Work

When you want a Capricorn guy to text you back, send him messages about subjects that you know interest him.

If you don’t know him very well yet, a safe guess for a Capricorn man is that he loves to talk about his work.

He is very career-driven, so he will have a lot to say when you text him to ask how his work is going.

Ask him for the details of what he does, what his favorite part of the workday is, and what his career goals are.

It may seem like you’re giving him a job interview over text messages, but work is one of his favorite topics, so he will surely text you back.