What Happens When a Capricorn Man Gets Mad? 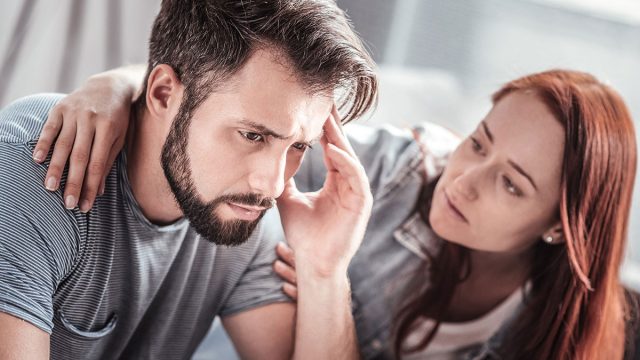 If you have a man born under this zodiac sign in your life, you may wonder what happens when a Capricorn man is mad.

Capricorn is a very level-headed, stable sign, so it’s unusual for a Capricorn man to get very mad.

He also isn’t the most in touch with his feelings and he doesn’t like showing his emotions. So, how can you tell when he’s upset?

By learning more about his zodiac sign’s typical characteristics and behaviors, you will know what happens when a Capricorn man gets mad.

He Bottles His Feelings

Some zodiac signs release their emotions the moment they feel them. When they are sad, they start crying immediately. If they are angry, they will frown, snap at you, or start yelling right away.

But Capricorn man is a master of self-control, and he also has a hard time recognizing his feelings. It might take him a while to realize that he’s angry, and even longer to express it

A Capricorn man in love is very patient with his partner, so when she does minor things to annoy him, he doesn’t get angry.

He tends to bottle up his emotions because he needs time to acknowledge them before he can react.

He Hides His Emotions

Capricorn is a notoriously unemotional sign. You might think that your Capricorn guy is made of stone because he is so stoic and doesn’t seem to get worked up about anything.

It’s not that he’s super laid-back or that he doesn’t have any feelings. He’s actually secretly very sensitive, and he also has strong opinions and emotions about the things that matter to him.

He’s just skilled at covering up his emotions, so even though he may appear calm and unbothered, it’s just the mask he wears.

You might not ever know when a Capricorn man is mad at you because he is so good at hiding his feelings.

If a Capricorn man gets mad at you, the most likely way he will show it is by ignoring you.

He’s not the type of guy who lashes out, snaps at you, or throws things around when he gets angry. He’s more icy than fiery, so giving you the silent treatment comes more naturally to him.

He won’t ignore you over something small, like forgetting to take the trash out. But when a Capricorn man ignores you, it’s a sign that you’ve done something to deeply upset him.

He prides himself on being reliable and consistent, so if he suddenly stops answering your calls or returning your texts when he normally would, it means he’s shutting you out.

Capricorn is a zodiac sign that cares about appearances. A Capricorn man believes good manners are important, so he always tries to be polite and considerate.

When a Capricorn man likes you, he will never hurt your feelings intentionally. He might say the wrong thing and accidentally upset you, but he wouldn’t deliberately be rude or spiteful.

But if a Capricorn man is mad enough, or if he just doesn’t like you, you will see his rude, nasty side.

This version of him is surprising to his friends and loved ones because they so rarely, if ever, get to see it.

But if a Capricorn man is angry or intensely dislikes someone, he can be deliberately rude and shockingly hurtful.

Every zodiac sign correlates with one of the four natural elements. The four elements are fire, air, earth, and water.

A sign’s element reveals that sign’s disposition and personality traits. Capricorn is an earth sign, and earth signs are known for being steady, disciplined, and stable.

What attracts a Capricorn man is a cool, calm, level-headed woman. He prefers a lady who thinks with her head rather than her heart, just like he does.

It takes a lot to ruffle a Capricorn man’s feathers. Because he bottles his feelings, it takes a while for him to get so angry that he explodes.

But if someone hurts him over and over again, or if too many things go wrong for him at once, a Capricorn guy will lose his self-control.

When a Capricorn man is so mad that he blows up, the best thing you can do is stay out of his way. His rage is rare but powerful and fearsome.

After a Capricorn guy explodes with rage, he immediately gets embarrassed and regrets it.

A Capricorn man dislikes big, dramatic displays of emotion, and he hates it when he loses his self-control. He never wants anyone to see him that vulnerable, especially not someone who upset him.

If your Capricorn man is distancing himself after blowing up at you, or even at someone else in front of you, it’s because he’s embarrassed.

Give him some time to lick his wounds, and let him know that he has nothing to be ashamed of because everyone has moments when they lose their cool.

Although a Capricorn man is always there for his loved ones, he doesn’t like to ask for help for himself.

He especially dislikes sharing his feelings, and he never wants to burden his friends by venting to them about his anger.

Capricorn men are also usually introverted, so they need time to retreat from others to unwind and manage their emotions.

If your Capricorn man is suddenly distant, it could mean that he’s isolating himself from the world to deal with his feelings.

Don’t take it personally when he does this; he’s not only isolating himself from you but also everyone else in his life.

If you think he’s putting his guard up because he’s angry and upset, reach out to him and let him know that you are there for him in case he wants to talk.

Once you’ve made a Capricorn man angry, he will forgive you, but he won’t forget what you did.

You need to apologize to him first before he will move on, but even after he accepts your apology, he will still remember it forever.

Some zodiac signs are better at holding a grudge than others, and a Capricorn man can hold a grudge until the end of time.

If you want to know how to make a Capricorn man happy, you need to show him that you’ve learned from your mistakes and won’t make them again.

The only way he can completely move past whatever you did to upset him is if you prove to him through your actions that you won’t hurt him the same way.

Just as some zodiac signs hold a grudge longer than others, some signs are more likely to seek revenge than others.

Capricorn isn’t a particularly vengeful sign, but if he is mad enough, he will hit you where it hurts the most.

He is more likely to get revenge on you in a practical way than by trying to hurt your feelings.

For example, if you cheat on him, he probably won’t get revenge by going out and sleeping with someone to get back at you.

But he will tell all of your mutual friends what you did, and when he breaks up with you for your infidelity, he will make sure that you suffer by making dividing up your possessions very difficult.

A Capricorn guy values his career and finances above everything else, so he is more likely to take revenge on you in those areas of your life, as well.

He doesn’t often get so angry that he wants to take revenge, but when he does, you can expect it to hurt a lot.

He Cuts You Out

When a Capricorn man ices you out because he’s mad at you, don’t think that you can’t thaw his heart.

If you are wondering, “Will a Capricorn man come back after disappearing?” The answer is yes if he still cares about you and wants to salvage the relationship.

Most of the time, he will stop ignoring you once he has had some time to recover.

If you offer him a sincere apology and try to make it up to him with your actions, he will forgive you and communicate with you as usual.

But if he is upset with you enough, he is capable of cutting you out of his life for good. Capricorn is a very stubborn zodiac sign, and when he makes a decision, he usually sticks to it.

If he has decided that you bring more bad things into his life than good, and if you’ve angered him enough times or done something terrible to him, he will get rid of you.

Once a Capricorn guy stops talking to you, it doesn’t mean he never plans on speaking with you again. If he’s giving you the silent treatment, you should make an effort to get him back.

But if he continues to ignore you after you’ve apologized and given him some time, then your Capricorn man has decided to cut you out.

If this is the case, the only option you have left is to move on because you can’t change a Capricorn man’s mind once it’s made up.