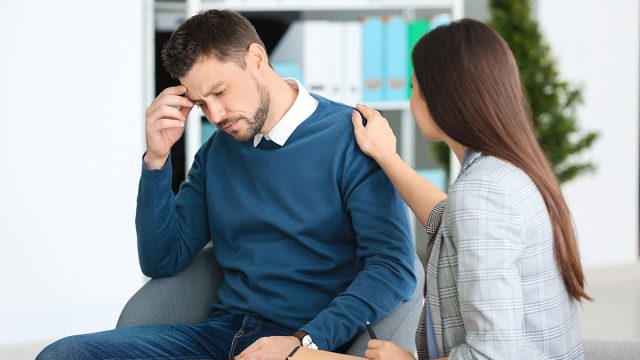 You may have heard that a Capricorn man is complicated. This is only true if you don’t understand his unique personality.

Capricorn men are actually very predictable and easy to figure out. As long as you accept them for who they are.

As you get to know a Capricorn man, you’ll find that his habits are predictable. He operates like clockwork. Yet every once in a while, he’ll surprise and baffle you.

Capricorn men can be complicated. The key to understanding his motivation is to think of a Capricorn man like a perpetual businessman. Even his interactions with family and loved ones are efficient.

He can be sentimental, but he won’t let emotions sway his decisions. He will instead try to take a matter-of-fact approach to everything he does.

He can be nurturing and caring. Until you shed tears. Then a Capricorn man becomes deeply uncomfortable and awkward. He’ll treat you like a leaking faucet rather than a person in emotional distress. He’ll try to get you to stop crying but may come across as insensitive during the process.

How does a Capricorn man test a woman? He doesn’t go out of his way to test you. He simply observes how you respond to stressful situations as they arise. If he sees that you can handle yourself without drama, he will be more attracted to you. He’ll do all he can to help you.

Yet he’ll go out of his way to help you in a practical sense. He won’t try to unpack the emotional baggage you’re experiencing. If you have a problem, he’ll try to solve it. If you want him to empathize with you and hold space for you, he’ll be completely lost.

When a Capricorn man is done with you, there is only one reason he’ll stick around. If he feels responsible for you because of your history together, he’ll stay in your life even when the love is gone. He has a sentimental side, but it only goes so far.

He can eb romantic and sensitive but he remains mostly aloof. He looks at relationships in a similar way as business transactions. If something doesn’t give a good return on investment, he sees no reason to continually invest his time and energy.

He can be detached and aloof in this regard. After a breakup, you may wonder if he ever cared at all. The truth is he most likely did. Yet a Capricorn man will have no problem closing the door on a relationship if it becomes too negative, dramatic, suffocating or limiting.

Sometimes you have to make a decision even if it upsets some people. Capricorn men understand this. He has a sensitive side, but a Capricorn man is more practical than emotional. If he has to choose between doing the right thing and making you happy, he’ll follow his moral compass.

He isn’t slowed down by fears of how his words or actions will make you feel. Yet he can be slow moving if he has many considerations to make related to the best way forward. In relationships, he’ll consider what moving in together means in terms of practicality.

If he’s ready to move in together, for example, it’s because he sees it as a financially sound prospect, not just an emotionally intimate one. Capricorn men can be slow moving and seem aloof because they don’t let emotions rule how they act.

A Capricorn man suddenly distant is a common phenomenon when he is feeling upset or overwhelmed. If you expect him to just simply open his heart to you, you’ll be disappointed. This is not his style of communication.

A Capricorn man’s falling in love signs can be hard to gauge. He isn’t openly emotional. He is sometimes confusing because he can be traditional but unemotional. When he’s dating, a Capricorn man will act like a perfect gentleman.

You may feel like this is a sure sign he’s falling in love, when in fact it is really a sign he is following a traditional script of chivalry and politeness. Capricorn men can also be old fashioned when it comes to their views on money and business.

He may care about you, but will maintain strong boundaries and act with propriety. You may wonder whether he is acting in an outdated fashion because he’s avoiding you or because this is his baseline. Assume it is his baseline before assuming it is a sign he doesn’t like you.

Why do Capricorn men withdraw? It can be baffling when he suddenly shuts down. On the one hand, Capricorn men are mature and serious. They will shut down instantly from a relationship that becomes too dramatic and chaotic.

On the other hand, he may also act in an immature way by shutting down when a relationship becomes too emotional. Capricorn men act older than they are. They may even look older than their actual age.

Capricorn men expect all matters in a relationship to be handled in a serious and mature manner. If you play mind games with him, he’ll withdraw. He will also be turned off if you act childish. Even if you’re being playful and silly. He has a low tolerance for this.

One of the most confusing and frustrating traits of a Capricorn man is his tendency to be a concrete thinker. This means he doesn’t easily see nuances. This impacts everything from his communication to his sense of humor. He’s likely to put things in specific boxes.

He sees things as black and white and there are no grey areas for a Capricorn man. Things are either good or bad, right or wrong and so forth. When a Capricorn man learns something new, he may reduce it to the most basic information and file it in his mind, but this can lead him to misperceive subtle clues.

A Capricorn man can also be slow to open up in a relationship because he sees things in such concrete and finite terms. He may hold out until he’s ready for serious commitment. Then, seemingly out of nowhere, he may talk about marriage and major moves forward.

If you want to know how to make a Capricorn man obsessed with you, the best thing to do is leverage this black and white thinking in your favor. Try to impress him and show him you’re his ideal woman. He’ll likely idealize you if you stand out as stable, ambitious and successful.

What does a Capricorn man like in a woman? He admires women who are stable, independent, practical and successful. If you enjoy affection and open displays of love and emotion, you may interpret a Capricorn man’s personality as cold.

The best way to nurture a relationship with a Capricorn man is to have your own solid foundation. If you are stable and secure in yourself, make it clear you want him but don’t need him. This reassures a Capricorn man. He doesn’t like needy relationships.

Sometimes, he’ll seem to act cold in response to a woman who is in hot pursuit. Even if he likes you, he doesn’t like being chased. Let him set the pace for the relationship and be prepared for his pace to be slow and cautious.

Why do Capricorns push you away? It’s common for a Capricorn man to seem like he’s pushing you away at various times in a relationship. This is most common when he either feels smothered or feels vulnerable. He’s protective of his desire for security.

Yet his protective nature can also be beneficial to the relationship. He can seem controlling sometimes but at the risk of being old fashioned, a Capricorn man will express strong opinions if he feels you are taking risks.

Capricorn men are slow moving, careful and obsessed with security. He may check in with you frequently or express his concern about your lifestyle choices if he thinks you are taking risks that could harm your safety or health.

A Capricorn man can dress in style and likely drives a solid and reliable car that is also a reflection of high status. Yet for all his materialistic signs of success, he’s surprisingly frugal. This can confuse women who date Capricorn men.

A Capricorn man will take you to the fanciest restaurant around, but will use three coupons to help bring down the cost. He’ll project a sophisticated style and you’ll never guess how much of a bargain shopper he actually is.

Capricorn me are obsessed with finances. He tracks his budget down to the penny and will become stressed out if he is going over budget. At the same time, he is status conscious and has an eye for quality. He knows sometimes you get what you pay for and will show expensive tastes.

When a Capricorn man respects you, you’ll know it because he won’t try to interfere with your plans. If he cares about you but doesn’t trust you to make good decisions, he may try to micromanage you to some extent. He can be strict and holds to high standards.

He also has a strict routine that he uses to keep himself and his immediate family on target. He may project this strict attitude onto his relationship with you as well. He may criticize you for sleeping late or not exercising regularly for example.

It’s in a Capricorn man’s nature to be strict, disciplined and to have formalized schedules and agendas that he follows right down to the letter. He expects others to behave in the same way.