What Happens When a Cancer Man is Upset? 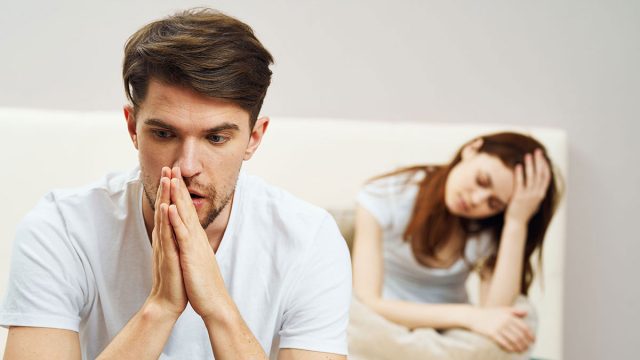 When a Cancer man is upset, it can seem like a dramatic storm of emotions have been unleashed.

There are as many shades of emotion for a Cancer man as there are colors in the rainbow. He’ll go from quiet to outraged and everything in between.

A Cancer man is faithful, loving, sensitive and compassionate. But a Cancer man when hurt can be clingy. If you don’t know how to apologize to a Cancer man, you’re in for a wild ride.

He may run the gamut from being needy to putting you on guilt trips when his feelings are hurt. Even if you aren’t to blame, you’ll see the full spectrum of emotion as he vents to you.

When a Cancer man is upset, it’s best to remain grounded. His emotional highs and lows can make it hard to bear being around him but if you can wait out the storm it may be worthwhile.

If you’re wondering how to know when a Cancer man is done with you, it means he isn’t done with the relationship yet. When he is, you’ll know without question. Initially, a Cancer man will hide his feelings when he’s upset.

When he goes quiet, he may be suppressing his emotions, but he’s not likely to be done with the relationship yet. He’s going quiet because he wants to keep the peace and not explode with emotion.

He’s trying to sort through his pain and frustration without rocking the boat. This is a good sign, although it can seem confusing. He still cares about you and is trying to save face.

He’ll tell you everything is “fine” even though you can tell clearly this is not the case. A Cancer man may try to hint at being upset but he will leave just enough clues to make you wonder without talking about his feelings.

If you think you’re seeing signs a Cancer man is playing you, you may be reading too much into the situation. He’s probably not playing mind games when he goes quiet. Instead, he’s trying to deal with his upset emotions.

Sometimes he will sulk a little longer than usual and it may lead you to wonder if he is trying to get a reaction from you. While this can be the case, he usually doesn’t do this through silence. Usually he’ll use guilt trips.

When he goes quiet it is because he is feeling too hurt and vulnerable to even talk about the situation. In this case he doesn’t want to try to work things out just yet. He needs time to get settled emotionally.

How does a Cancer man break up with you? Not typically through a period of silence. He’s too expressive for that. When it’s really over, he’ll make a more dramatic display of emotion, possibly anger.

Even when he’s upset and going quiet, it is very rare for a Cancer man to initiate a breakup. He fears abandonment and is usually the one being dumped, not the one breaking up.

He Won’t Want to Cuddle

If you want to know how to make a Cancer man feel guilty after an argument, you don’t have to work too hard. His emotions can be strong and transparent and it’s easy to play on his fears.

Yet if a Cancer man is upset you may make this situation worse by doing this. Some of the reactions a Cancer man will have to being upset include shutting down his affection. He may even move away when you try to touch him.

Sometimes Cancer men become super clingy when they are upset because they’re trying to reassure you or stay on your good side. But other times they become ice cold and suddenly don’t want to cuddle.

Cancer men are usually affectionate. When this suddenly changes, and not because he’s busy with something, it can be a sign a Cancer man is upset. He may be mad at you or upset about stress at work, but something is off.

A Cancer man who is upset may try to avoid addressing the real trigger. If he’s upset with you but doesn’t want to risk an argument, he’ll project his anger onto a different situation.

Yet he may also take his anger at someone else out on you if he feels you are the safer and more forgiving target. For instance, if he’s upset with his boss and can’t tell his boss off, he may be grouchy with you. He knows you’ll forgive him.

For this reason, you may need to do a little investigative work before you take a Cancer man’s moods at face value. Always recognize when there is something off with him but don’t assume the cause is what he says it is at first.

Sometimes a Cancer man is upset because he’s emotionally sensitive and doesn’t even know why. He may have picked up on an emotional issue a friend is having and suddenly he’s being sulky without even realizing it.

Cancer men, like most men, are socialized not to cry. Yet they are emotionally sensitive and can’t help it. When really upset, you’ll see him shed tears. Sometimes he’ll stay away from you if he doesn’t want you to see him cry.

A Cancer man can’t fight back his feelings but he also hates that showing emotion makes him appear “weak.” He will try to wrestle with his feelings and may deny how vulnerable he really is.

When he cries, try to show compassion. If you use the opportunity to get the last word in, it won’t be good. If you want to know how to win your Cancer man back, you’ve got to start by being there for him emotionally.

For a Cancer man, it feels safer to get angry than it does to be vulnerable. Sometimes when he’s upset he’ll make accusations. Even if he knows full well that what he’s saying is likely not true.

It’s just easier for him to deal with a conflict if he can make it seem like you are the aggressor and he is somehow the victim. A Cancer man can be jealous as well. Sometimes he believes his insecurities and this leads to making accusations.

If you want to know how to make a Cancer man chase you, you’ve got to know how to outsmart his emotions. Don’t fall for the bait of accusations and avoid power struggles with him.

Instead, try to keep yourself calm and show you are confident but also nurturing and empathic. He needs to know that you relate to his emotions even if his reactions are inappropriate.

When a Cancer man is upset it triggers all his insecurities. This in turn triggers his clingy nature. He may hang on tight because he fears he’s in hot water with you. He may also become clingy out of fear or self-doubt.

A Cancer man may also show a possessive side. This may seem flattering at first, but it can actually be toxic. It’s not a good idea to encourage a Cancer man to be too clingy. It’s actually just perpetuating his insecurities.

He may check in on you more often or want to know where you are more frequently. He may seem more affectionate or more interested in sex as well. These are all strategies he’s using to try to keep your attention.

A Cancer man loves to eat even on a good day. When he’s upset, sweets and favorite comfort foods can be a matter of coping, even if it is not the healthiest way of coping.

A Cancer man may overeat to deal with the stress of an argument or separation from you. When things aren’t going well in the relationship, you may see it on his waistline as well as in his facial expression.

He may go for extra desserts or stay up late at night snacking. He may also start to overindulge in foods that aren’t healthy for him. Though it may seem innocent enough, too much of this style of coping can lead a Cancer man to have health problems.

How do you know when a Cancer man is over you? Put simply, at some point he may step off the rollercoaster and refuse to engage with you anymore. This is not a decision he takes lightly. It’s not easy for him to move on.

Being alone is hard for a Cancer man and casual relationships may be the strategy he uses to help himself get over you. If he can’t get over you, he will keep coming back around eventually.

A Cancer man wants to know that he gave a relationship his best effort. Even when things get rough, he doesn’t want to give up. When he does move on, you can rest assured he thought long and hard about the decision.

He likely asked all his friends for advice and then ignored them at first because he really wanted things to work out. Usually he will give himself some space and then come back to try again. He’ll try to break the habits that lead to conflicts in the relationship in the first place.

Are Cancer Men Submissive in a Relationship?10 Tips to Get a Cancer Man Back After a Breakup
Hello, I'm Liz