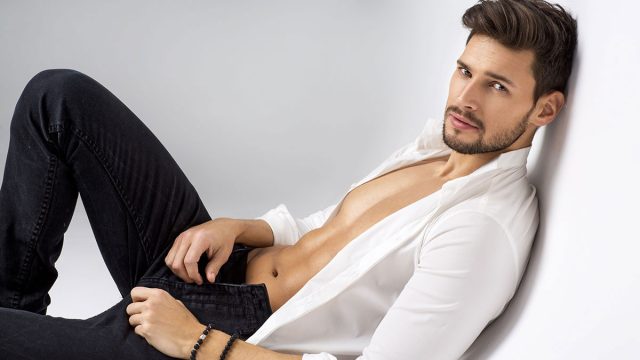 Common Cancer man traits make this sign of the Zodiac an ideal romantic partner. A Cancer man’s behavior when in love can be make him seem aloof.

But when he warms up to you, you’ll see a Cancer man’s personality and sensitivity come through.

Ideal Cancer man compatibility requires a woman to be patient, nurturing and grounded. This will help balance his common Cancer traits. Understanding a Cancer man will help you open his heart.

What Cancer men want is a partner for life. When he loves you, he will want to marry you. Knowing how to make a Cancer man happy requires understanding his traits.

A Cancer man’s personality is easy to understand when you look beyond stereotypes of masculinity. Many of his character traits make him an ideal husband and father and family man.

If you want to attract a Cancer man, you’ll have to find a way to get into his home. The key to his heart is to understand he is first and foremost a homebody. A Cancer man would stay home indefinitely if he could.

He would rather watch movies and cuddle than go out. He feels safe at home. Feeling secure is essential to a Cancer man. Even his home away from home, a family gathering place, favorite vacation spot, or workplace, will also be comfortable for a Cancer man.

Don’t rush him to come out of his shell. This includes not trying to lure him out of his home. Understand that a Cancer man needs lots of downtime in his home and may be more secure when he’s at home.

He’s more sensitive than he lets on and will retreat to where he feels safe. When he really likes you, he’ll invite you into his home. He may never want you to leave either. He takes great pride in his home and may own his own place.

He is likely to much time and energy into fixing things up in his home and sees home as an extension of himself. If you compliment his home, including any handiwork he has done on his home, he’ll be deeply flattered.

A Cancer man is one of the most sensitive signs of the Zodiac. He goes out of his way to hide this. He may try to build himself up or use satire or a detached attitude to disguise his vulnerability.

Since he is so sensitive, he will hide even his feelings for you at first. This will lead him to test the waters before opening up. How does a Cancer man test you? He will drop hints about his feelings or opinions.

He may act neutral just to see what stance you will take. If you validate his opinions or feelings, he’ll be reassured and start to come out of his shell. If he sees that you are compassionate and understanding, he’ll start to open up.

He may be offended at innocent remarks that you make. A Cancer man may also take a casual statement to be deeply upsetting when that was not your intention. You need to be careful with a Cancer an. He will take things personally.

He may overthink issues that aren’t intended to be taken quite so seriously. When you show empathy and compassion for a Cancer man, you’ll make a great impression. He looks to others for emotional validation and to have greater stability than he has.

How does a Cancer man act when in love? His walls start to come down. He’ll show vulnerability. He can be sweet and caring. He will also become more affectionate.

From holding your hand to wanting to hug you and hold on tight for a little longer, a Cancer man will show his love physically. He feels reassured and secure when you show him affection in return. He could spend hours cuddling.

He’s less sexually oriented than other men. As a result he can show affection quite openly without every intimate encounter resulting in sexual intimacy. He loves to hold the woman he loves. Even while driving or waiting in line, he’ll reach over to touch you.

Even when he’s busy, a Cancer man is never too busy to show affection and touch you. He’ll stroke your hair, hold your hand, put his arm around you or lovingly put his hand on your knee.

When a Cancer man loves you, he loves to be close to you in every way. He can also be possessive. Sometimes affection is a way for a Cancer man to show his possessive side. He feels secure showing that he has physical contact with you.

Why your Cancer man might lie to you? Make sure he is always honest about his feelings for you.

A Cancer man can be quite nurturing. Once you get past his defensive exterior, he’s a big teddy bear. His soft side makes him super romantic and loving. He’s a great listener. No matter your dreams, he’ll encourage you.

He may treat you, and all his loved ones, like family. He loves to care for you and show you encouragement. He can be a great parent or stepparent because of his nurturing instincts. A Cancer man loves to nurture family and friends alike.

He needs to feel nurtured and validated as well. All it takes is a slight nudge to watch a Cancer man flourish and come into his full potential. In return, a Cancer man will show you unconditional love and support.

A Cancer dad is protective, nurturing and compassionate. This stems from his desire to be deeply connected to family. This is true both of his desire to remain close to parents and early caregivers, siblings and elders in his family.

It is equally true in his desire to be linked to a family he forms with his partner. He dreams of having children from a young age. He loves family gatherings. One of his favorite things is to host a large family gathering in his home.

Whether celebrating the holidays, or just because, a Cancer man loves to be surrounded by multiple generations in his family. He has close family ties, even if his relationships are complicated. He’s loyal and devoted.

The last thing you want to do with a Cancer man is criticize his family. Especially his mother. He may criticize his family or even make jokes about them. It’s important that you not join in. If you do, he’ll become surprisingly defensive and distance himself from you.

Your Cancer man doesn't love you anymore? Don't be so sure!

Part of a Cancer man’s sensitivity stems from his emotional empathy and his heightened intuition. A Cancer man seems emotional and you may often think he’s overreacting. Don’t tell him this.

One of the best ways to get a Cancer man to completely shut down is to tell him he’s being too emotional or that he’s being too sensitive. Yes, he’s moody. But he doesn’t know this. He thinks his reactions are normal.

The upside of his emotional nature is that he is so sensitive, he’ll easily show the love and attentiveness you deserve. The downside is every thing can be a trigger for a Cancer man. He’s easily upset.

His moody nature can make it hard to keep up with a Cancer man. He may be euphoric one moment, depressed the next, then angry, then happy again. When he’s comfortable with you, he’ll show you the full spectrum of rollercoaster emotions, quite openly.

When he is reserved or just getting to know you, he’ll try to hide his moodiness. This doesn’t mean he doesn’t have deeper feelings. It means he is doing his best to hide and suppress his feelings so you don’t judge him.

A Cancer man is deeply devoted to his loved ones. Even if he’s just dating you, he’s already in love. He falls in love quickly and will want to act married almost right away. He’s also loyal.

You typically never need to worry about a Cancer man cheating on you. When he loves you, he takes his bonds seriously. He will act as if his commitment to you is like a commitment to his own family. He won’t lead you on.

Not only is a Cancer man faithful, he’s also completely devoted to you. He will defend you if others criticize you. He’ll place you as a high priority. He’ll go out of his way to be caring and protective.

Most of the time, a Cancer man is honest. He doesn’t play mind games and hates it when others are deceitful. He would never mimic this harmful behavior. He prefers to be open and transparent.

Though you can count on a Cancer man to tell you the truth, there is one exception. A Cancer man tries to avoid conflict. If he can imagine you getting upset with the truth, he’ll try to soften it a little.

He does this to try to please you or keep you happy. Once he really comes to trust you, though, he’ll learn that he can be completely honest with you. A Cancer man will always be forthright when he can trust you to not abandon him if you get upset.

A Cancer man’s intuition is uncanny. This goes above and beyond his empathic abilities. Sure, he can sense your emotions. He knows instinctively how you are feeling. He can even sense what is causing your different moods.

Yet a Cancer man may dream of you before you meet him. His intuition borders on psychic and sometimes even crosses over that line. He can anticipate your needs and may also have an otherworldly feeling of what is to come.

Good or bad, his sense of intuition can sometimes stress him out. If he talks about his feelings about what is on the horizon. Always believe him. He is usually spot on.

Once he learns to trust his intuition, he will insist on trying to protect you through the use of this skill. He may also intuit when you are being dishonest or losing interest. Never try to fool a Cancer man.

What Kind of Woman Attracts a Virgo Man?What is The Best Match For an Aquarius Man?
Hello, I'm Liz