In The Cancer Man Friend Zone? Some Tips For You! 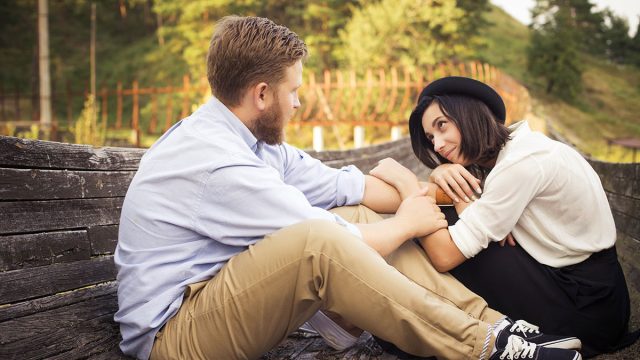 If you’re ready to get out of your Cancer man’s friend zone, you must show him that you’re serious about him!

Cancer men prefer long-term, committed relationships. He’ll only ever be your friend if he doesn’t think you’re ready for that.

Cancer men are wonderful, loyal friends. Even if your Cancer man friend zoned you, that doesn’t mean he cares about you any less!

If you want to get out of that friend zone, you need to be serious about him. Your Cancer man will give you a chance, but he doesn’t want to have his heart broken by someone who isn’t ready for a serious relationship.

Cancer men are used to being the ones who are friend zoned instead of the other way around. He will understand how it feels, so be open and talk to him about it.

Know What You Want

One of a Cancer man’s turn-offs is when people play hot and cold. He will never see you as anything more than a friend if you don’t know what you want from a relationship.

Before trying to get out of the friend zone, figure out what you want. Do you legitimately want a committed relationship with your Cancer man, or are you just temporarily infatuated with him?

You’ll break your Cancer man’s heart if you start a relationship with him and then change your mind. There’s no point in trying to be more than friends if you aren’t genuinely ready to commit to him.

Cancer men want long-term relationships, not short-term flings. Figure out what you want from him before you make any moves.

Your Cancer man might not even realize that he’s put you in the friend zone. He’s typically more passive and doesn’t always take the initiative in relationships, so you might need to clarify your interest in him!

Flirting with a Cancer man isn’t the only way to show your interest in him, so be sure to do more than that. He might think you’re just playing around or may not even notice you’re flirting!

You may need to tell your Cancer man that you’re interested in him. He might not know that you want to be more than friends until you’re direct and honest about your feelings.

One of the signs a Cancer man just wants to be friends is that he will keep his distance even when you show interest. He won’t want to lead you on or hurt you, especially if he values your friendship.

A relationship with a Cancer man will be far more successful if you two share key values. He will still be your friend if you don’t, but you’ll never get out of the friend zone if he doesn’t know your values align.

Sharing values is more than agreeing with your Cancer man’s likes and dislikes. He doesn’t care if you like the same movies he does. He does care if he wants children someday, and you don’t.

Talk to your Cancer man about what you want from a relationship. If he notices that you two want many of the same things, he might start to see you as more than a friend.

Be Ready To Settle Down

What a Cancer man wants to hear is that you’re serious about him and ready to settle down when the time comes. You will stay in the friend zone if you’re just looking for a casual fling!

One of the signs a Cancer man has feelings for you is that he sees a future with you. He might casually mention future events as if you’ll be there with him.

Your Cancer man might see you in his future, but he’ll friend zone you if he thinks you’re not ready to settle down.

You must make it clear that you are ready for a serious, committed relationship if you want a relationship with your Cancer man.

You don’t necessarily need to be ready to get married tomorrow, but your Cancer man wants to know that you’ll be ready to settle down at some point if you two start a relationship.

Cancer men can sometimes be insecure and unsure about themselves, especially regarding relationships. Your Cancer man might have put you in the friend zone because he doesn’t think he deserves you.

Show your Cancer man that he does deserve to be with you. Compliment him and tell him what a great person he is.

If your Cancer man is a supportive and loyal friend, let him know! Tell him how much you value your relationship with him, even if it’s not the exact relationship you want with him right now.

Your Cancer man might reveal his feelings for you once he feels better about himself. If he makes comments about how he’d be a bad boyfriend, tell him that’s not true. Help him to see himself in a more positive light.

A Cancer man’s ideal woman is kind, compassionate, and patient. He doesn’t want someone who will rush him or try to push him into anything he’s not ready for.

If you reveal your feelings for your Cancer man and he says he’s not ready for a relationship right now, respect that! Show him that you can be patient and wait for him.

If he thinks you’ll be pushy or get impatient and leave him, he won’t want to have a relationship with you. Your Cancer man needs to know that you can be patient no matter how slow he goes.

If you want to know how to attract a Cancer man, you must show how loyal you can be! Cancer men are loyal and devoted partners and want someone who will return that loyalty.

One way to prove your loyalty is to show him how reliable you can be. You need to follow through if you say you will do him a favor. If you make plans with him, don’t cancel!

You can also prove your loyalty by being honest with him at all times. If your Cancer man is always catching you in lies, he won’t be able to trust you enough to have a romantic relationship with you.

Your Cancer man will also know you can be a loyal partner if you’ve been loyal to partners in the past. If you’ve ever cheated on a partner and your Cancer friend knows about it, you’ll likely always be his friend and nothing more.

Cancer men are incredibly emotional. They are sensitive and used to having their feelings brushed aside. If you want to get out of the friend zone, show him you can respect his feelings.

Emotional maturity is one of a Cancer man’s turn-ons. He wants someone who will support him when he needs it and doesn’t want to feel like he’s doing all the emotional labor in a relationship.

Don’t brush your Cancer man aside if he opens up to you about his feelings. Do not invalidate him or tell him he’s overly emotional when he’s sad and wants to talk about what is bothering him.

Your Cancer man might not even want to stay friends with you if you constantly invalidate his feelings. You need to respect his feelings and show him you can be supportive if you want to stay in his life!

Go At His Pace

Your Cancer man might want a long-term, committed relationship, but he’s not going to immediately dive into things. He might take a while to open up to you, to want sex, or to make things “official.”

You must be prepared to go at whatever pace your Cancer man wants. If you go on a date with your Cancer man and expect too much from him too soon, he’ll put you right back in the friend zone.

Your Cancer man might also just want to stay friends for now. You need to respect that! He might want to take his time getting to know you better before he tries to change the nature of your relationship.

How To Beat a Cancer Man At His Own GameIs Your Cancer Man Hiding His Feelings?
Hello, I'm Liz