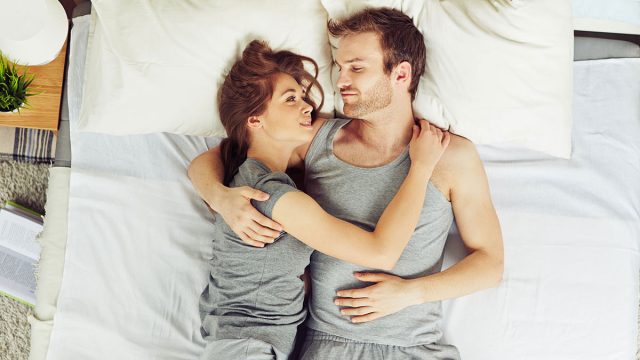 If you’re dating this sensitive sign and love to snuggle and show affection, you might wonder, “Will a Cancer man cuddle with me?”

Is a Cancer guy a cuddler, or does he need his space?

You can use astrology to figure out almost any characteristic of each sign, including how the signs cuddle.

If you’re with a Cancer man and like to snuggle, then congratulations! Cancer is one of the zodiac signs’ best cuddle buddies.

By learning more about his sign, you can get a better sense of what motivates a Cancer man to cuddle, along with when and how he likes to be close to you.

When you’re dating the sign of the crab, you might ask yourself, “Do Cancers like to cuddle?” If you like to snuggle, then you will be happy to know that yes, Cancers love cuddling!

He won’t cuddle with just anyone, though. Don’t expect to be super touchy-feely with a Cancer man the moment you meet him.

But once you get close to him, even in a friendship, this guy loves to show his affection through physical touch, and he’s the sweetest, snuggliest sign you could ever hope to cuddle.

He Needs Cuddling in a Relationship

Not only do Cancer signs like to cuddle, but also they need it to feel fulfilled in a relationship.

Some signs are innately opposed to a lot of physical connection and don’t want or need much cuddling to be happy with their partners.

But a Cancer man feels unloved when his partner doesn’t want to snuggle with him. He has a natural desire for physical touch, and when he’s deprived, it makes him deeply unhappy.

If you’re not a touchy-feely person, a Cancer man probably isn’t going to be the best match for you.

But if you love spooning in bed at night or snuggling up on the couch to watch television with takeout, then a Cancer guy could be your soulmate.

How They Act When They Can’t Cuddle

There are plenty of situations where cuddling isn’t an option, and in those circumstances, a Cancer man will always find a way to make another form of physical contact with his loved ones.

For example, when a Cancer man has a crush on you but doesn’t know you well enough to cuddle yet, he will go out of his way to hug you or touch your arm during a conversation.

As much as he loves affection, this doesn’t mean a Cancer man is promiscuous or open to touching just anybody. He doesn’t go around kissing strangers because he only craves touch from the people he loves.

When it comes to his favorite people, like close friends, family, and his romantic partner, it’s almost like he can’t keep his hands off of them.

He’s very physically affectionate, so when he can’t cuddle, a Cancer man will find other ways to show his feelings through touch.

They Cuddle Their Loved Ones

For the Cancer zodiac sign, cuddling isn’t just to show romantic love. He doesn’t restrict his cuddling to only his partner.

He is touchy-feely with anyone he loves and will cuddle to show his affection towards anyone.

If he has children, you can bet that he cuddles with them at bedtime or even when they are just hanging out around the house together.

If he has pets, it’s almost certain that he lets them sleep in the bed with him, despite his desire for cleanliness in his personal space.

If you have a Cancer brother, father, uncle, or friend, then you may have noticed that he is quite comfortable with physical affection.

Cancers are the teddy bears of the zodiac, so once they are comfortable with you, there is nothing they love more than to cuddle with you.

They Cuddle in Public

Some signs are squeamish about touching in front of other people and hate public displays of affection.

Although they are quite shy in many other ways, Cancer horoscope signs are perfectly comfortable showing affection in public, even cuddling if the opportunity presents itself.

A Cancer man might sit on the same side of the table as his partner at a restaurant because he just can’t keep his hands off of her.

He will smother her with kisses in front of his friends or spoon with her on the couch at his parents’ house over the holidays.

When he is in love, he doesn’t care who sees it. Feeling a physical connection with his partner is more important to him than privacy or shyness.

Cancers can also be jealous and possessive, so cuddling in public also lets him show the world that the person he cuddles is taken.

They Cuddle at Home

Each sign of the zodiac is positioned in a “house” that represents their values. Cancer is in the fourth house of the zodiac, the house of home and family.

Although they will cuddle anywhere, Cancers most enjoy cuddling at home. This is probably because they are happiest when in their own houses.

Cancers can be social and outgoing, but even the most gregarious Cancers love being home more than anywhere else.

A Cancer man is most at peace when cuddled up with his beloved partner, children, or pets at home.

Nothing gives him more joy than being surrounded by his favorite people and possessions, snuggled close to him to show their love.

They Cuddle in Bed

Some signs don’t like to cuddle in bed very much. They get too hot, their arms go numb, or they just want their own space.

Cancers don’t care about any of the potentially inconvenient or uncomfortable logistics of cuddling. They want to be as close to their bedmates as possible, even if it results in night sweats or tingling limbs.

If you push a Cancer guy away in bed, he will take it personally. Make sure you explain to him that you are pushing him away because you can’t sleep, not because you are upset with him.

If you’re dating a Cancer guy, invest in a high-quality mattress and bedding that allows for airflow. You’ll need it when your lover wants to hold you late at night, even when the air conditioning is broken and it’s 100 degrees!

Cuddling Doesn’t Have to Lead to Intimacy

Some signs only cuddle if they want to signal to their partner that they are interested in other bedroom activities.

For them, snuggling close is a segue to sex. When they feel their partner’s touch, they naturally associate it with sexual intimacy.

But for a Cancer guy, snuggling doesn’t have to be a precursor to sex. For this sweet and sensitive sign, cuddling is just about feeling close to someone.

While cuddling is certainly one of the physical signs a Cancer man likes you, it doesn’t mean he expects or wants anything more at the moment.

They Cuddle to Protect You

Cancers are fiercely loyal and there is nothing they won’t do to protect their loved ones. He values family above anything else and will keep them safe at all costs.

Cancer’s heavenly body is the moon, which has long been associated with women. This means that Cancer men are very in touch with their feminine sign and have a better understanding of women than most.

Cancer is also considered the “mother” of the zodiac, which helps explain why those born under this sign are so protective. They also make some of the best parents of the entire zodiac.

Just as a mother bear will ferociously protect her bear cubs, so will a Cancer man guard the ones he adores. Mother bears also sleep snuggled with their babies to keep them warm and protect them from predators.

When he protects you, it’s one of the signs a Cancer man is serious about you. Sleeping with his arms around you is an instinctual way of keeping you safe through the night.

They Cuddle to Apologize

When a Cancer man feels guilty, he will do everything in his power to correct his mistake. Because he is so empathetic, he hates hurting anyone and will work hard to alleviate any pain he has caused.

When a Cancer man needs to apologize for something, he pulls out all the stops to show how contrite he is.

He demonstrates his regret through word and deed. He will offer a sincere apology, beg for forgiveness, and look for opportunities to make it up to you.

One of the ways a Cancer man will say that he’s sorry is by cuddling you. If you’re upset with your Cancer guy, don’t be surprised if he touches and snuggles even more than usual.

This is because he is trying to show you how much he cares and that he is deeply sorry, and he’s trying to create a connection with you.

When he feels guilty, he fears losing you and doesn’t want to be pushed further away. He will cuddle close to you physically so he can feel closer to you emotionally.