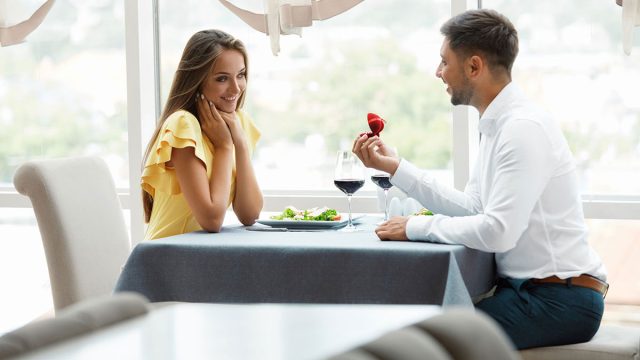 If you want to make a Cancer man commit to you it isn’t hard at all. You just need to understand his personality.

When you know what a Cancer man likes and dislikes in a woman, you can easily get him to commit.

If you’re wondering if you’re seeing signs a Cancer man is playing you or if he’s ever going to commit, you may be misreading his signals. He’s insecure and may act uninterested.

Yet that doesn’t mean he doesn’t truly love you. Be patient and you’ll see the signs a Cancer man is serious about you. He’s just slow to open up.

For a Cancer man, commitment issues aren’t the problem. He struggles with trust issues. When he feels secure with you, he’ll commit.

If you want to know how to make a Cancer man chase you, start by being responsible and dependable. He’s emotional and sensitive and it will make him feel reassured to know he can count on you.

He doesn’t want you to feel you need to take responsibility for him or his feelings. Yet if he sees that you are conscientious and responsible in your own life, he’ll trust you more easily.

He’ll be reassured because your life isn’t constant drama. This is a good way to signal to a Cancer man that you are a stable, secure partner. He’ll feel more comfortable with you when he sees you’re grounded.

A Cancer man’s behavior, when in love, can be confusing. He can be shy and withdrawn and yet he’ll continue to show up around you. He may not initiate conversation, but he’ll linger in the background.

He’s waiting for you to make the first move so that he’ll know you’re really interested. He can be insecure and telling a Cancer man how you feel first can break the ice. He’ll appreciate your vulnerability.

Also, he loves when you are attentive to his emotional needs. He doesn’t crave attention in the same way as a Leo man, but he does like to be nurtured. Show him that you care about how he feels.

Ask him about his day, whether or not he’s hungry or how he is feeling. Show him your undivided attention when he talks to you. When he sees that you are genuinely interested in him, he’ll want to commit to you.

A Cancer man won’t be impressed if you try to go out of your way to get his attention and it rings false. He doesn’t care about appearance and will be turned off by mind games.

If you really want to get his attention and get him to commit to you, be authentic. Be true to who you are. He needs to feel like he’s getting to know the real you. If you change to try to please him, he’ll get confused.

He’ll see the false image you’re trying to convey and assume you are a superficial person. This will make him not trust you. As a result, he won’t want to be with you because he will feel like he’s in a guessing game.

At first a Cancer man needs space. Be patient and coax him out of his shell by nurturing him. Don’t try to rush him to settle down. Usually he’ll want to get serious but will hold back at first.

When a Cancer man is done with you, you’ll know it. He makes it clear. He’ll either completely disconnect emotionally, go out of his way to ignore you, or cause a scene to deter you. If he’s moving slowly, he just needs time and patience.

When you show him that you can be patient with his mood swings and insecurities, he will warm up to you. He’ll want to settle down and make a commitment. He’ll know he’s finally found the woman who truly understands him.

You’ll need to know what to do when a Cancer man ignores you, but only at first. Slowly encourage him to gradually open up and share his feelings with you. Be consistent and nurturing. Initiate contact but don’t chase him.

Cancer men love affection. Usually they can’t get enough. Follow his signals so you’ll know by his mood whether he’s open to cuddling. If he is, show that you have a soft and affectionate side.

Hold hands when you walk together, greet him with a bear hug and cuddle while watching movies. A Cancer man won’t stay in a relationship with a woman who is physically cold and distant.

If you prefer a lot of personal space, he will always feel rejected by you. Instead, show him that you are warm and affectionate. Take any opportunity to connect with him through touch.

6. Talk About Having a Family

You don’t have to lay out plans to have a family with him in the near future. Yet if you want a Cancer man to commit, it helps if he knows you long for a family someday. Make this desire known early in the relationship.

Cancer men are family oriented and usually want to settle down into a cozy home and start a family. If you have goals of having children as well, make it known that this is a priority for you.

When you let him know that family is important to you and on your list of future plans, he’ll be excited and reassured that your goals are aligned. It will encourage him to make a commitment to you.

Your home is no doubt cozy by your standards, but is it welcoming to a Cancer man? To make your home Cancer man friendly, make sure it is tidy but warm and welcoming.

Put plenty of soft pillows and even a teddy bear or two on the couch. Dim any harsh lighting. Make sure the kitchen is clean and tempting. Decorate with water fountains or images reminiscent of the ocean.

Make sure the color schemes are soft and relaxing, nothing too bold and harsh for a Cancer man. The living room should be so comfortable that he instantly wants to cuddle on the couch and tell you his life story.

A Cancer man will actually think twice about committing to a woman he loves if she isn’t good with money. He dreads financial insecurity and the thought of being perpetually in debt will turn him off.

Show him that you are financially savvy and resourceful. Be smart with your money management and you’ll reassure a Cancer man. He’ll know he can trust you and will want to commit. Talk to him about your financial goals.

This may seem like a taboo subject in romance but to a Cancer man, it’s music to his ears. He loves to know that you have a plan for a rainy day. He also will feel reassured by your cautious investing habits.

Show him that you don’t rely too heavily on debts and credit cards but also that you have good skills when it comes to prioritizing and saving your money. He’ll be able to envision himself settling down with you.

When you want a Cancer man to settle down with you, it helps to be ambitious. Show him that you are headed for success. This satisfies his desire for security. He’s not adventurous but may be inspired if you have a feisty side.

If he sees that you’re going places in your career, he will want to commit to you. This has nothing to do with him using you for money. Instead, it’s about your ambitious side inspiring him.

Cancer men have many dreams but sometimes they need someone to kickstart their motivation. When he’s with an ambitious woman who cares about career and business, it is invigorating for him. It makes him feel inspired.

He will easily feel comfortable committing to you because he will see that your high energy is a perfect complement to his introverted nature. He will want to be by your side to celebrate your successes.

10. Show You’re Obsessed with Him

Some guys are scared away by a woman who seems too eager. Not a Cancer man. Show him you’re obsessed with him and as into him as he is into you. Cancer men can be clingy and if he knows you’ll always be there for him, he’ll feel reassured.

He will also feel more secure in the relationship if he sees that you are determined to be together forever. Don’t give him any reason to doubt you or to fear that you won’t be faithful to him.

Instead, talk about future plans as if it is natural. Make it clear you know he’s the only one for you. Emphasize that you are loyal and a one-man woman. You don’t have to make him the center of your world, but make him feel like he is.

When you make major decisions, make sure you factor in his feelings and needs. When he sees that you are so deeply connected to him and into him, he’ll feel secure. He’ll know you aren’t going to abandon him, and he’ll want to commit.

Cancer Man & Virgo Woman Compatibility: Perfect Match?10 Signs Your Cancer Man is About to Break Up with You
Hello, I'm Liz