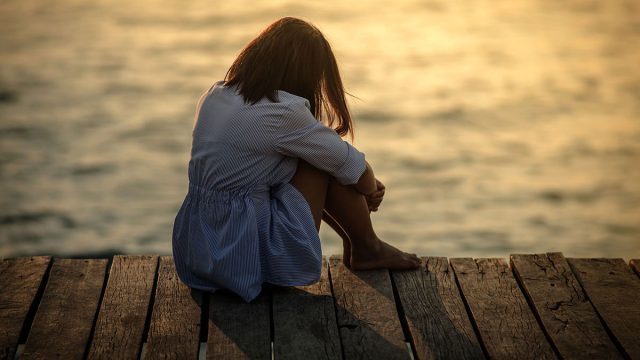 Do you know the most common Cancer man breakup signs? Being dumped by a Cancer man is rare, he holds on for life.

But that doesn’t mean you’re in the clear. Look for these signs so you can save the relationship.

Will a Cancer man come back after a breakup? Usually, yes. But that doesn’t mean you should let things get out of hand.

If you see the signs he may be headed for a breakup, you can try to save the relationship. If you overlook these signs, you may be too late.

When a Cancer man is done with you for good, he won’t return. Knowing the signs you may be getting close to his limits can prevent the connection from completely eroding.

You can try to figure out how to make a Cancer man come back, or you can make your relationship breakup-proof. One way to do this is to look for the early signs that he’s feeling disconnected from you.

Usually, a Cancer man wants to do everything together. He wants you in his life, in his home, and in his space. Even when you would rather have some down time. One of the earliest red flags is when he suddenly becomes territorial.

When he suddenly gets grouchy about spending time together or complains that you left your makeup bag at his place, take notice. This display of territorial attitude is a sign he needs some space.

This doesn’t mean he wants the relationship to end right then and there. But it is an important red flag. It means he wants to have some room to himself to think things over or deal with some emotions or reclaim some of his home.

What happens when you ignore a Cancer man? At this stage, when he’s getting territorial, it will work to your benefit. Don’t ignore him if he contacts you first but do give him a few days to be alone. This gives him time to miss you.

2. He Wants to Do Things Alone

On a similar note to becoming territorial, when he suddenly wants to go to a concert or movie but not with you, it is a red flag. Plenty of guys go places with friends or alone.

But Cancer men prefer not to. When in a relationship, they want to go everywhere with their special woman. When this suddenly switches over to the desire to be alone it is a warning sign.

He’s preparing himself for life without you. He may just need a slight break so that he will realize how much he misses you. If you give him space and then see the signs a Cancer man misses you, he’ll rush back to your side.

Probably not. He’s now showing you signs that he can go off on his own for a period of time and not miss you. He’s slowly getting over you and an intervention is warranted.

Make him feel secure and pampered so he will want to be around you. Remind him of positive memories together and spark his desire for nostalgia. Don’t be too desperate but show him that his absence hurts you.

Does a Cancer man move on quickly? Typically, no. He will start to detach from you in stages. Even then, he may be back and forth. He knows a decision to move on can be devastating and he doesn’t take it lightly.

Yet he will show you signals that he no longer feels as connected to you. One of these warning signs is when he suddenly stops showing affection. If you normally cuddle a lot as most Cancers love to do, he’ll change.

You may reach for his hand and he’ll put his hands in his pockets. You may try to initiate cuddling while watching a movie and he’ll squirm away. He may show some affection but act cold in the process.

This is a red flag as Cancer men love cuddling. It makes them feel secure. He’s conveying that he either doesn’t feel secure in the relationship or is not attracted to you anymore. He may also be stressed out and not open to being comforted.

How does a Cancer man break up with you? Like his symbol, the crab, he’ll walk out of a relationship sideways. He’ll detach from you by wanting to be alone. Then he’ll start to lose himself in solitary hobbies.

He may begin playing with his phone during your dates or at dinner. When you’re watching a movie, instead of cuddling, he’ll check his e-mail or social media. He’ll begin to spend hours online.

Perhaps he’s trying to meet someone new to make the transition easier on himself, but that’s not always the case. He could just be scrolling aimlessly. The bigger issue is that he has checked out.

He’s not invested in his time with you and this is a red flag that he’s slipping away from you. Give him some space at first to be sure it isn’t a passing phase. If he continues to lose himself online, try to reconnect emotionally.

Cancer men aren’t always the best communicators. They are highly emotional and sometimes they struggle to put their feelings into words. They may also shut down a lot because of their mood swings.

But there is a difference between his normal communication ups and downs and a clear disconnect. When he’s losing interest in the relationship, he won’t even bother to try to communicate.

Normally he’ll at least make the effort even if he fumbles quite a bit in the process. He’ll also open back up after periods of silent moodiness. Yet when he’s over you he will completely shut down.

He’ll ignore your texts or just send back one-word answers. He will stare into space, barely paying attention when you speak and not responding unless it is essential. He’ll find any reason to not communicate.

6. He Stops Cooking for You

How do you know when a Cancer man is over you? When he stops cooking for you that is a red flag. Cancer men love to nurture others and cooking for their loved ones is one of his favorite ways to do this.

When he stops showing any interest in cooking for you and stops inviting you over for dinner, it’s a bad sign. This means he is not only not nurturing you, he’s also not nurturing the relationship.

He’s pulling away, but it may not be too late. This is an important time to try to engage with him. Rather than focusing on what is wrong at first, simply try to build an emotional connection again.

He may feel insecure or suddenly not trust you as much for some reason. You need to work to re-establish the connection with him and then try to get back on track. Don’t dismiss this early sign.

7. He Stops Visiting Your Home

If you want to know how to make a Cancer man feel guilty, it’s not hard to do. Though you may be able to use this tactic earlier in the process of disconnection, by the time he stops visiting you it’s too late.

If you try to make him feel guilty now, he will just pull away further. Cancer men love to visit your home as it makes them feel closer to you. When he stops doing this it is a sign he doesn’t see himself with you in the future.

Take this seriously but don’t try to manipulate him to get him back. At this stage, it is best if you try to appeal to his emotions and get him to feel comfortable with you again. It may take some patience but when he misses you, he’ll be back.

8. He Brings Back Your Stuff

This is another sign that you’ll see when he’s close to calling it quits. Whatever clothes you left at his house, even some of the gifts you’ve given him or things you’ve let him borrow will be returned.

He may do this one step at a time or he may show up with everything in a box and get it done with in one step. This is a sign he is physically disconnecting from the relationship and doesn’t see a future with you.

Otherwise he would keep your things and try to work on the relationship. A sign he’s giving up is when he doesn’t even want to have reminders of you in his home. That is, in part, why he is going to the trouble of returning them.

Cancer men love to express their feelings. Not only about you, but about everything. When he suddenly stops saying “I love you” test him. Say the words first and notice how he responds.

If he replies by saying he loves you too and sounds like he is just parroting out of habit, it is a bad sign. He may not yet realize it, but he is disconnecting from you. If he doesn’t say it at all or changes the subject, he’s definitely not feeling it.

Cancer men won’t lie and say they love you if they don’t. If he’s saying it without feeling just because you said it first, he may be so stuck in the habit of saying it that he doesn’t know how else to respond. Yet he’s not saying it first.

If he doesn’t respond at all when you tell him you love him, it is a clear sign he is getting closer to ending things. He may genuinely feel he no longer loves you or he may just need space.

10. He Stops Talking About Family

When you ask how his mother is doing, he may give a vague answer. This isn’t like him. Usually Cancer men love talking about family. This is a sign he’s pulling away.

Similarly, he may stop asking you to join him when he visits family. He may also stop bringing up family plans because he doesn’t intend to include you in get togethers or holidays.