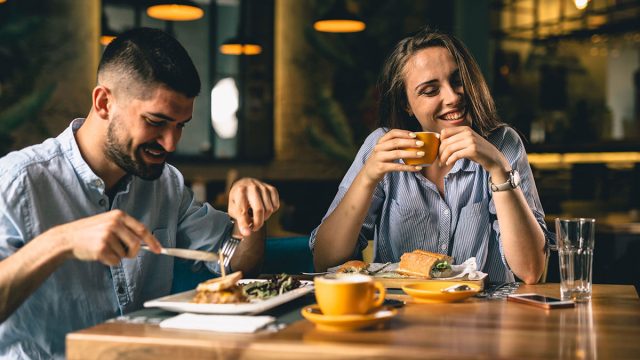 If you are wondering about Cancer man Aquarius woman compatibility, then you are probably in a relationship or friendship involving these signs.

So, can the sensitive crab find love with the independent water bearer?

Although sometimes opposites attract, based on the typical personality traits of these two signs, a Cancer man and an Aquarius woman are not an ideal love match.

They are better off as friends, and even then their opposing viewpoints may cause too much conflict.

Knowing their characteristics and how they act in relationships will help you know what to expect from a Cancer man and an Aquarius woman couple.

The best type of relationship an Aquarius woman and a Cancer man could hope for is a friendship, but even then it’s unlikely to be a close bond.

Those born under the Cancer sign yearn for deep, personal connections. They treat their friends like family and stay close to the same people for a long time.

Although Cancers are typically sweet and friendly, they are also usually guarded and stick to their tight circle of friends.

As kind as they are, Cancers may come off as cliquey because it takes them a long time to let new people get to know them on a deep level.

But Cancers are picky with whom they trust because they give their all in their relationships. Cancers are incredibly loyal to their friends, families, and significant others.

Aquarians also have walls up and are quite loyal to their friends, but that is about where the Cancer and Aquarius similarities end.

While Cancers crave being surrounded by their loved ones, Aquarians are fiercely independent.

An Aquarius woman may view a Cancer man’s constant need for companionship as codependency, while a Cancer guy might see an Aquarius woman’s extreme desire for freedom as selfishness.

The zodiac sign of Cancer is situated in the fourth house of the zodiac, which is the house of home and family. Aquarius is in the eleventh house of friends and society.

This means that while Cancers are more focused on their relationships with their close friends and family, Aquarians think of society as a whole.

For example, a Cancer man will spare no expense keeping his family safe and happy, while an Aquarius woman would rather use her money to launch a charity or donate to a worthy cause.

Aquarians are opinionated and outspoken while Cancers are sensitive and private. An Aquarius woman may get frustrated with a Cancer man’s moodiness and a Cancer might be hurt by an Aquarian’s sharp tongue.

For those born under the signs of Cancer and Aquarius, friendship is the best possible outcome, but even then their differences could be too great to overcome.

For a Cancer man and an Aquarius woman, dating will prove difficult because their expectations early on in a relationship are so different.

When a Cancer starts dating somebody new that he really likes, he can’t get enough of her and wants to be around her all of the time.

An Aquarius takes quite the opposite approach to romantic relationships and believes that absence makes the heart grow fonder.

A Cancer man will make the woman in his life the center of his universe and puts spending time with her above anything else.

No matter how much she likes somebody, an Aquarius woman makes a point of balancing her time between her partner and everything else she has going on in her life, such as friends, family, and career.

This difference in expectations can leave a Cancer man feeling neglected, while an Aquarius woman may feel suffocated.

Even the Cancer and Aquarius break up styles are so drastically different, it’s unlikely this pair would ever attempt to reconcile.

Much like their zodiac sign’s symbol, the crab, Cancers tend to retreat into their shells when a relationship ends. They are so hurt that it takes a long time for them to trust anyone again.

Cancers are also notorious for holding grudges and when they feel someone has wronged them they don’t forgive easily.

Aquarians don’t like to hold grudges and when one relationship ends they are quickly on to the next.

Despite their obvious differences, you may be wondering if an Aquarius woman and Cancer man could still have a successful romantic relationship.

Each sign could potentially make a relationship with any other sign work, no matter how different from each other they are.

The important thing is that both partners are dedicated to understanding each other and willing to learn from their differences rather than let them break the relationship.

To make a Cancer man and Aquarius woman relationship work, both people need to respect the other person’s viewpoint. Compromise is the key to making this unlikely pairing successful.

Instead of focusing on the negative aspects of their differences, they must see how it creates opportunities for them to learn from each other.

At best, they can use their dissimilarities to grow as a couple and as individuals. At worst, they will never see eye to eye and a breakup is inevitable.

The key to making a marriage between a Cancer man and an Aquarius woman work is for both people to strive for understanding each other and make an effort to care for each other’s needs.

For example, a Cancer man has to accept that his Aquarius woman is free-spirited and independent. He loves to stay home and snuggle, while she yearns for adventure and hates being tied down.

If she wants to travel or go out with friends alone, he needs to accept that her freedom is important to her. He should encourage her to do what she loves and not make her feel guilty.

In turn, he can learn to be a little more independent and enjoy time to himself, or use the time to focus on his other relationships with family and friends.

Another example of compromise in this relationship is that an Aquarius woman isn’t usually very touchy-feely and she is uncomfortable with kissing and hugging in public. Cancer men are quite doting and possessive, and they love public displays of affection.

The Aquarius woman must recognize that touch is her Cancer man’s love language and when she pushes him away it makes him feel unwanted.

She needs to learn to be comfortable with his attention and affection and try to reciprocate it for the relationship to work.

Cancers may seem too needy and emotional to Aquarians, while Aquarians might come off as too cold and unreliable to Cancers.

But this pair can learn a lot from their dissimilarities and become better partners as a result.

A Cancer and Aquarius marriage is not a match made in heaven, but if they make an effort to understand their differences they might be able to make it work.

Although the initial spark of attraction between them may be undeniable, the sexual styles of a Cancer man and Aquarius woman may be too difficult to overcome.

When it comes to a relationship between Cancer and Aquarius, sexually they have very different philosophies.

Aquarians like sex to be fun and playful. They are good at separating lust from love and they don’t need a spiritual connection with somebody to make magic happen in the bedroom.

But Cancers have the opposite approach to sex. Although they might indulge in occasional one-night stands, they prefer to have a mental and emotional bond with someone before getting intimate.

For Cancers, sex is a way to express love and create intimacy. Their bedroom style is sweet and romantic, and they enjoy bonding with their significant others through sex.

For an Aquarius, sex is a fun activity that doesn’t require any sort of attachment. They like to explore the perverse and taboo, which can be uncomfortable for the shy, emotional Cancer.

An Aquarius might find a Cancer too uptight and intense in the bedroom, while a Cancer could view an Aquarius partner as too distant and unfeeling when it comes to sex.

Cancers tend to be clingy and emotionally fragile, while Aquarians need space and can be tactless and insensitive. This pairing will lead to plenty of explosive arguments because they have such a hard time relating to each other.

But when they make up, or perhaps as a way to make up, the sex will be passionate and dynamic. This satisfies both the Cancer’s need for intimacy and the Aquarian’s desire for excitement.

Eventually, though, both signs will tire of the constant fighting and making up, no matter how intense and fiery the sex is. Even if it’s the best love-making they’ve ever experienced, it’s not enough to hold the relationship together.