How You Can Attract a Scorpio Man at Work 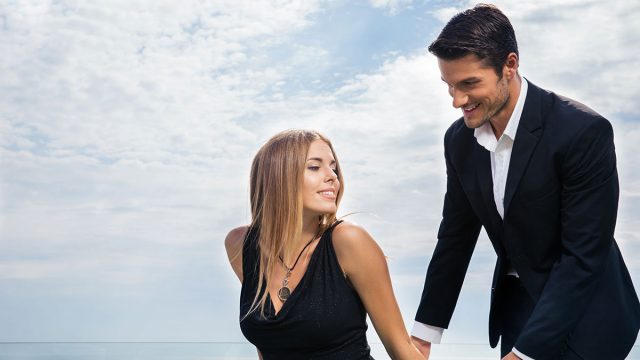 If you want to attract a Scorpio man at work, you’ve got to tread carefully. He loves flirtation and seduction but also takes his career seriously.

He will avoid office drama, so you’ve got to be subtle about your flirtation.

When a Scorpio man is interested in you, he will dance around it at first. This serves him well in a workplace setting. He knows just how to hint at an attraction without crossing lines.

Boundaries are important to a Scorpio and he loves power and prestige. Keep your attraction low key at work. There are still many ways to capture his interest.

You’ll need to know what attracts a Scorpio man physically. In short, power and mystery. If you convey both through your appearance and body language, he’ll notice.

If you’re wondering how to tell if a Scorpio man is interested in you, you’re not alone. He makes his attraction a vague game of cat-and-mouse at first. He may seem to give mixed signals. When in doubt, wait. Let him show his interest before pursuing him.

This is especially true of a Scorpio man at work. He doesn’t want to draw attention to his vulnerability. He also doesn’t want to jeopardize his standing in the workplace. Be patient and work on sending off attraction signals that are not obviously seductive.

One way to do this is by showing him that you also value your work. Be a perfectionist. Show him you have an eye for details. Uncover minutia that others have overlooked. Be impeccable with your appearance, work performance and standards.

Take pride in your work. Don’t hand in anything sloppy. Strive for awards and opportunities. When he sees that you’re going places, he’ll want to be by your side. Don’t compete with him directly, but strive to be your best.

A Scorpio man at work will be attracted to your ideals and your ability to stand behind your high standards. Accept nothing less than perfection from yourself and others. You’ll get his attention and he’ll feel you’re on his level.

If you know how to seduce a Scorpio man through text, you’ll know that sometimes less is more. This is tricky territory at work. It may be best to reserve text seduction for when you’ve gotten to know him better.

If you do text him, don’t leave anything controversial that could come back to haunt either of you. Your record needs to be perfect and your standards high if you’re going to win the heart of a Scorpio colleague.

Show him that you are too classy to chase him. Instead, let your work speak for your ambition. Make it clear that you are driven to succeed and have high expectations.

When you see a Scorpio man going out of his way to make you happy and fulfill your hopes and expectations, you’ll know he’s interested in you. At work, he may go to great lengths to help you succeed.

If you’re wondering how to get a Scorpio man to chase you, the best thing you can do is be discreet. This is especially true of a Scorpio man at work. If you come on too strong, you’ll turn him off.

You may even embarrass him or scare him away, though your intentions are good. You need to keep him guessing and never be too predictable. Scorpio men love mysteries.

Be a puzzle for him to solve. The more you can leave clues for him that have innocent or more seductive meanings, the better. Keep your desire a secret but leave breadcrumbs for him to follow.

Only show him the faintest hint of your interest. Be respectful and friendly but don’t shower him with attention. You may find it easier to get him to chase you if you leave him guessing more often than not.

What kind of woman attracts a Scorpio man? The kind of woman who can be classy and professional but also show an interest in taboo topics. Impress him with your knowledge of unusual subjects.

This can be tricky in a workplace setting. Be careful to not go overboard or he will feel you’re violating his boundaries. When someone brings up edgy topics such as the occult, divination, secret societies and conspiracy theories, show that you’re comfortable joining in the discussion.

You can find polite and work-appropriate ways to express taboo attitudes or opinions or to simply raise questions about what is presumed to be common knowledge. When he sees that you’re inquisitive and unconventional, he’ll take interest.

If it doesn’t violate company policy, show your tattoo or wear some jewelry reminiscent of mysterious occult symbolism. You can catch his attention and signal that you have an intense nature.

Don’t shy away from difficult conversations. Casually bring up controversial issues and show that you aren’t afraid to explore a broad range of issues and can assert your ideas. Show you aren’t only interested in small talk.

Be Edgy but Professional

When you see signs that a Scorpio man has feelings for you, you can take y our flirtation to the next level. Show your Scorpio love interest that you can be professional but also edgy. Push the boundaries more.

Show him you have a dark side. Take an interest in issues that push the envelope. Push your own boundaries as well and show your Scorpio man that you aren’t content with complacency.

Put a streak of dramatic color in your hair, spice up your appearance and flaunt your sex appeal in a classy and professional way. Let him see that you are playful but also serious.

What’s a Scorpio man’s ideal woman like? She’s confident and powerful. She knows how to command the attention of an entire room without even saying a word. You have to know what to wear to attract a Scorpio man.

Have a Witty Sense of Humor

How does a Scorpio man pursue a woman he’s interested in? He’ll drop hints at first. One of the ways he tries to get your attention when he likes you, especially at work, is through his sense of humor.

When a Scorpio man has a crush on you, you can get him to feel a strong bond by showing him you appreciate his dark and witty humor. Tell witty jokes and make sarcastic remarks.

Poke fun at workplace issues, just don’t aim your sarcasm at him directly. You may have to have a thick skin at first because Scorpio men like to push buttons to get a reaction from you. His sarcastic humor can be biting if you’re oversensitive.

Show your Scorpio man that you can joke about any number of topics. Don’t take yourself too seriously. Use intelligent humor to get his attention and convince him that you are on the same wavelength.

One of the most important things you can do in a professional relationship with a Scorpio man at work is to be direct and honest. Show him you are reliable. This will go a long way.

He doesn’t trust easily. Scorpio men can even be a bit paranoid. When you are consistent and authentic, he will warm up to you and feel more comfortable with you.

Don’t show false flattery to a Scorpio man. He will see through it and will never trust you again. When you’re sincere and direct, even when the truth hurts, a Scorpio man will appreciate your efforts.

Scorpio men need to have honesty as the cornerstone of their relationships. If you are honest with him, a Scorpio man will let down his guard in time and get to know you on a more personal level.

If you do enter the realm of flirting at work with a Scorpio man, tread lightly at first. Make coy statements that could have a double meaning. Flirt through your eye contact with him. Gaze seductively at him when you speak.

Don’t go overboard, just add small hints of flirty fun into your conversations with him. If he takes your cue and turns up the dial on flirtation, he’s giving you the greenlight to proceed. If he doesn’t, step back and go even slower. Be more playful than flirty.

You may notice that a Scorpio man flirts with many women. This doesn’t mean he wants to date them all. Some Scorpio men are naturally flirty and love to get attention from women around them.

It gives them a sense of power and importance. Play into his ego’s desire to be seen as high status and in demand. Fulfill his desire to have attention and admiration without being too overbearing.

Keep flirtation light and fun until you’re certain he’s reciprocating, especially considering it is a workplace setting. If he’s interested in you, he should respond favorably relatively early into the flirtation. Yet if he acts disinterested, or starts ignoring you, take note.

Don’t assume he needs you to change his mind. Respect his boundaries. He may be slow to commit to a relationship, but when he’s at work, he won’t want to be distracted with a romantic pursuit unless he’s truly interested in you.