How You Can Attract a Pisces Man at Work 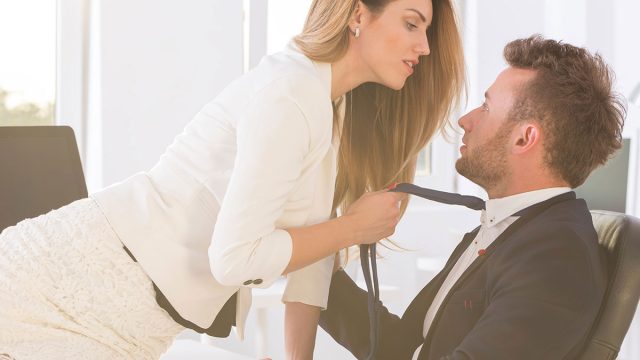 Yet if you understand his personality, you can leave all the right clues that appeal to a Pisces man.

What does a Pisces man find physically attractive? He prefers sentimental, soft and romantic styles. This may not always be practical at work.

Yet if you try to blend professionalism and casual style, you can catch his eye. Luckily, Pisces men are more attracted to your personality than your appearance.

If you know how to compliment a Pisces man so that you flatter his ego and validate his feelings, he’ll respond. He cares more about your heart than your appearance.

In a workplace setting, you’ve got to adapt your strategy. If you want to know how to make a Pisces man chase you at work, the answers are simpler than you may think. Help him accomplish his tasks.

Pisces men can be hard working, but they have very specific interests and can be quite lazy when it comes to facets of their work routine that aren’t appealing. If you give him a helping hand, he’ll appreciate it.

A Pisces man will always notice who goes out of their way to help him and this also gives you a chance to flirt with him. Pisces men appreciate collaboration and will come to expect more help over time.

This may feel frustrating for you but whether he intends to or not, a Pisces man is giving you the perfect chance to get to know him better. He’s giving you a chance to bond with him at work, even if it takes more of your time and effort helping him.

When a Pisces man has a crush on you, he’ll go out of his way to linger around you at work. Problem is, he won’t always do this in a productive way. It may take work, but if you want to court a colleague born under the sign of the fish, you’ve got to do yoru work and some of his.

Cover for His Mistakes

If you’re wondering how to get a Pisces man’s attention, one of the most important things you can do may go against your own boundaries. It takes some enabling to get his attention and this turns many women off.

If you cover for his mistakes and preserve his reputation, even when he messes up at work, he will be grateful. He’s not always the most attentive guy. His mind tends to wander and he daydreams a lot. This often puts him at odds with his boss.

If you’re able to cover for him or bail him out of an awkward situation, even if he is facing the consequences of his own inactions, a Pisces man will notice it. He will return the favor and will pay attention to you.

He may come to see you as an ally, a friend and then eventually a love interest. Pisces men feel that connection to other people is more important than productivity. If you help him out and cover for his mistakes, it could be the start of your relationship.

Be Generous with Treats

Another way to attract a Pisces man at work is to leave treats on your desk. A bowl of candies or a box of donuts, Pisces men have a sweet tooth. He will now have a reason to continually visit throughout the day.

He may distract you from work, though so use this in moderation. Yet tempting him with treats, homemade or otherwise, can be a great way to entice a Pisces man to come to your cubicle or office and spend time with you.

He pays attention to the people who are generous with him. He will come to see you as a compassionate, friendly and caring person because you brought food in to share.

When you pay a compliment to a Pisces man, he’ll never forget it. This can be a great way to break the ice with a Pisces man at work. He loves to be flattered because he seldom thinks highly of himself.

A Pisces man’s communication style isn’t always the best. It takes some work to get to the bottom of communication issues and he tends to think others can read his mind. One of the best ways to help him open up is through compliments.

Try to soften up a Pisces man with words of encouragement and inspiration as well. Compliment him for things he’s often criticized for. He’s often late because he’s distracted himself with friendly chatter, so rather than criticizing him, compliment him for being so kind.

He’s often creative but his boss may criticize him for having his head in the clouds. Show admiration for his ability to think outside the box. Turn his weaknesses into strengths.

When you compliment a Pisces man, always do so with sincerity. He’ll know if you are manipulating him or exaggerating. Pisces men can be very intuitive. Better to only say what you sincerely mean.

Stick Up for Him

What does a Pisces man find attractive in a woman? He loves it when a woman is compassionate and dreamy but more grounded than he is. He’s often not assertive and is attracted to women who are.

Usually, Pisces men are friendly and get along with everyone. But his tendency to be slow and inefficient can get him into hot water in certain work settings. If you go out on a limb to stick up for him, he will take notice.

Pisces men always appreciate those who come to their defense because they seldom come to their own rescue. This can create a strong bond between the two of you. He may even feel he’s falling in love with you.

How does a Pisces man test you? He will watch to see how you react to his feelings. If you protect him or show concern for his vulnerability, you’ve passed the test. Yet if you join in a joke at his expense, he won’t trust you.

It’s far better to stay on a Pisces man’s good side and let him see you as an ally or someone who will come to his rescue when he feels like he is being bullied. Pisces men frequently feel this way at work.

Their personalities are not conducive to success in a high pressure corporate setting. They are often the scapegoats or will make themselves the scapegoats in a stressful office setting. Therefore, when you show solidarity with him or stand up for him, a Pisces man will rush to your side and stick to you like glue.

He will see you as his protector and may come into your office to vent or seek validation from that point on. This can be a good way to start forming a bond with him that can grow into something much more positive over time.

What attracts a Pisces man? A few of the things he is most drawn to are creativity, art, compassion, spirituality and empathy. He loves to be part of a mission to heal or help others. He always thinks of the emotional aspect of a situation, not just the practical.

This can leave him stuck in work situations in which efficiency and productivity are valued more than a human touch. He’s got an excellent bedside manner, but he doesn’t always know how to set boundaries at work. If you collaborate with him, you can attract his attention.

He’ll appreciate your willingness to join forces with him. If a Pisces man comes to see how well you complement his talents and skills, he will also come to see you as an ideal romantic partner. He believes there is a purpose to everything.

He may come to recognize that you were destined to work together both in the office and in life. This will make him eager to get to know you on a more personal level.

What happens when you ignore a Pisces man? If he already likes you, he’ll pursue you. But if he doesn’t know you that well or doesn’t have enough proof of your interest in him, his shy nature can stand in the way of the relationship.

Instead of ignoring him, try to encourage his success. Tell him you believe in him. Help him find new opportunities. Show your Pisces man that you are his biggest cheerleader and fan.

He will find this endearing and will want to spend more time with you. A Pisces man who sees that you believe in his dreams, rather than criticizing them as so many others do, he will be more infatuated with you.

If you have connections that could help him advance professionally, don’t be shy about making introductions. If you know of a new promotion opportunity, share it with him. Give him moral support and show him that you believe he can succeed.

Even if his career aspirations seem idealistic and grandiose, encourage him to take the practical steps that will lead to this ultimate success in the long run. This will help him see that you’re serious about encouraging his success.

How Do You Get a Pisces Man to Text You?Pisces Man & Cancer Woman Compatibility: Perfect Match?
Hello, I'm Liz