How You Can Attract an Aquarius Man at Work 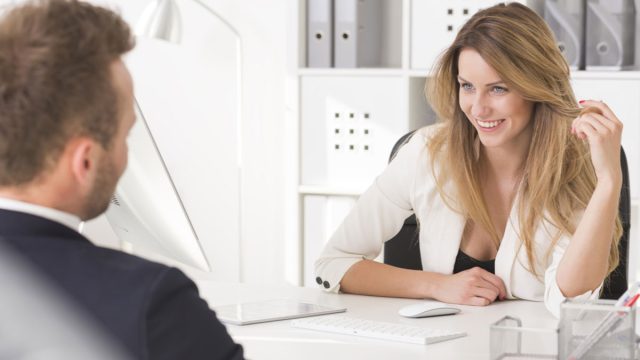 Are you thinking about trying to attract an Aquarius man at work? Have you found someone who shows the perfect combination of intelligence and humor?

If you’re going for it, you should know that it takes a bit of skill.

You see, an Aquarius man has the charming combination of cool and calm, as well as self-control and high levels of intelligence. It makes them highly irresistible and they are well-aware of that fact. Attracting them is quite the challenge.

They’re not the typical man and you will understand why.

One of the most telling Aquarius man traits is that they are not people bounded by convention and they refuse to be tethered down by established norms. Then there is the fact that they’re not romantic in the general sense.

You need to let go of the mushy love notion that is highly romantic like in the movies. Do not expect the guy to be someone who will just pamper you and take care of all your needs for you.

What attracts Aquarius men is logic. For an Aquarius guy, everything is dictated by logical reasoning and rational decision making that works with his eccentricity to make him the irresistible man he is. They do not have time for tantrums.

All of that makes it look like things are not going to be easy when you will try to attract an Aquarius man at work, doesn’t it? Do not be dissuaded from wanting to date him. It will be fun.

Understanding the Aquarius man traits before the games begin is vital so that you’re aware of what type of a woman Aquarius men like. They don’t do emotions and they don’t like to be chained. They like to be free.

Getting the attention of an Aquarius man is not a major problem. How to keep an Aquarius man hooked is the real challenge. When you’re able to hook him on, he will definitely try to chase you and win you.

Just another word of caution: Aquarius is an air sign. That means he’s highly likely to be a commitment phobic – at least in the beginning. He’s constantly exploring and trying all possibilities in life. You need to accept this fact.

Tips to Attract the Aquarius Man at Work

Being the most unconventional people in the room, what attracts Aquarius men is the unusual itself. The best way of how to get an Aquarius man to chase you is to embrace your eccentricity and freely flaunt it without fear.

In the office space, which is simply full of people of the most generic people, be that refreshing shining light. Be someone who does not conform to the rest but stands out clearly for him to be able to notice.

Now, hold on. Being your eccentric self does not mean you need to start wearing painfully bright clothes and dye your hair neon pink. It just means that you need to have some subtle qualities to make you stand out.

Being like every other girl in the office with straight hair, red lipstick and an expensive, branded bag doesn’t work in your favor when it comes to trying to attract an Aquarius man at work. Just be comfortable and relaxed.

If high heels are not your thing and you hate them, do not wear them to work. It is something pretty unconventional and noticeable. Both things are something that can get his attention and he will like that about you.

It may not have to be your heels necessarily. It’s just an example. Understanding Aquarius men and what they like will help you make the necessary decisions when it comes to displaying your eccentricity.

He’s a Sucker for Intelligent Conversations

It is not difficult to know how to read an Aquarius man when he starts to like you. The easiest way to get him started with the chase is to engage in intellectual conversations with him. He cannot resist that.

He always loves to spend some time engaging with people for conversations that test his intellectual level. The best part about it is that it doesn’t necessarily have to be something that interests him. It has to be something substantial.

Even if it’s not his particular area of interest, as long as you know what you are talking about and share amusing new information with him, he will start to admire you. They always love exploring new thoughts and ideas.

The best place to spark up a conversation with him is at the coffee dispenser. During the conversation, he’ll put across his views. Don’t agree with him for the sake of it but yes, you should be respectful of them.

He will appreciate an honest and knowledgeable argument over blindly agreeing with him on what he is saying. Never start immature arguments to prove your point. Make sure that your points are presented with the right facts to support them.

Talking like an individual that understands everything does not align with your thought process is something unconventional and an instant hit with Aquarius men. It is an easy way of how to make an Aquarius man want you.

Show off Your Penchant for the Unusual

Go for the unconventional and creative. One of the most prominent Aquarius man traits is that he is creative and he will appreciate the creativity in another person. If you have a creative spark, it definitely works in your favor.

To attract an Aquarius man at work, you can take advantage of any instances where you are working with him on something. Go for the out-of-the-box approaches to the projects you are working on. Suggest some innovative solutions to him.

It does not just have to be how you go about work. You can highlight your creativity by just exhibiting some unusual observations from your life or perhaps a new pun that is witty and original. Anything that is creative.

Be His Friend First

The initial attraction is all well and good but if you want to know how to keep an Aquarius man hooked, you need to know one thing: above everything else, you need to become his best friend first and foremost.

Aquarius men don’t seem like they are very emotional or sensitive but they actually are. They are also very less likely to trust people easily and let them into their lives. You need to focus on winning their trust first.

An Aquarius man takes his sweet old time trying to get to know you, observe you and understand you for who you are. Take it as an opportunity to become a friend that he can confide in and truly trust.

When he starts to trust you more and more, he will start to “like” you. It will not be difficult to tell how an Aquarius man acts when he likes you. They have a way of making it pretty obvious.

It is very important for him to understand that you are the kind of person who understands the Aquarius man traits of being seemingly emotionless and eccentric. If you truly embrace his personality, he might finally admit he likes you.

Never Be Afraid to Surprise Him

One of the things with Aquarius men is that they tend to get bored pretty easily. The best way of how to keep an Aquarius man hooked is to give him more and more reasons to be drawn towards you.

When you become friends with him, you’ve gotten past the point of how to initially attract an Aquarius man at work but keeping him interested and perhaps going for something long-term will need effort from you to surprise him.

If you are at the point where you have just become good friends with him, surprise him by giving him something thoughtful and nice. It does not have to be expensive; it just has to be something he will like.

Appreciate His Eccentricity of Thought and Ideas

One thing that you will just need to come to terms with is the fact that he is the one person at work whom you cannot expect to be influenced by the ideas and opinions of other people. It’s impossible.

This also means that if you get into a relationship with him, he will never change himself as a person to be more accommodating towards another person. You can’t expect to tether him down but you can fly with him.

Appreciating his eccentricity also means being understanding when he is just simply busy. When he’s taken on a new project, that’s where all his focus will be. Do not become a person who demands attention when he cannot give it.

Live your life and let him live his life. Be least bothered about the dates every week or phone calls every night. You already see each other at work often enough. Doing this much will work wonders for you both.