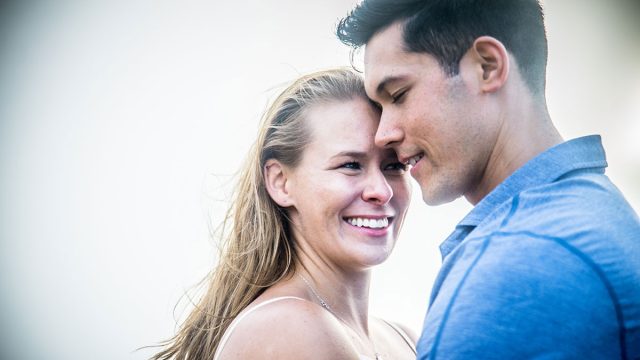 An Aries man and Sagittarius woman compatibility can be good depending on the nature of their relationship. They share common ground as friends.

Romantic relationships between this pair can be challenging. They have different boundaries and expectations when it comes to love.

An Aries man and Sagittarius woman’s attraction to each other may be instantaneous. They are both extroverts and will notice each other across a crowded room.

Though they are each drawn to the other’s lively style, this pair faces challenges in a serious romantic relationship. Her independence triggers his insecurities.

An Aries man can be distant at first, but once he falls in love, he’ll want to dominate a Sagittarius woman’s time. She’s turned off by this. Under certain circumstances, the relationship can succeed.

This pair doesn’t face the same conflicts in a friendship that they are likely to run into when romantically involved.

That’s because as friends, an Aries man and Sagittarius woman bring positivity into each other’s lives without being excessively demanding.

When an Aries man is just a friend, he’ll have no reason to become jealous over the many other male friends a Sagittarius woman pays attention to.

They’ll enjoy many adventures together and likely will want to travel together, since they both love exploring new places.

A Sagittarius woman is intellectual and philosophical. She will share all kinds of information with her Aries friend that will broaden his perspective, which is usually focused on himself.

This can help him to open his mind and become more conscious of his community or the world at large.

If she does this in a playful and friendly way, he’ll find her fascinating. If she becomes pedantic, he may be turned off and see her as self-righteous. Yet even then, this pair can form a fast and solid friendship that stands the test of time.

An Aries man is bold and assertive, traits a Sagittarius woman admires. She has no problem speaking her mind, either. Both are brutally honest and usually, they can also both handle each other’s blunt communication style.

Once in a while, a Sagittarius woman will say something in a way that offends an Aries man. He’s not sensitive but he is protective of his image.

Yet if he’s gotten to know her well, he’ll understand that she is curt with everyone and is not trying to insult him.

This pair may challenge each other in sports or trivia games. With her influence, they may get involved in grassroots campaigns or community organizations.

They are both passionate and active, but she doesn’t get as competitive as he does. She can be playful and take risks because she sees life as one big gamble. He is care-free but sees life as a race to be won.

Their styles can blend well together if they collaborate on projects for work. As friends, they can stimulate each other’s interests and passions.

This pair is honest and loyal and as friends, they will seldom find grounds for any serious fights.

Once in a while, if a conflict arises, he may blow off steam or she may become distant at first. But after a short time, an Aries man and Sagittarius woman will usually work things out and act as if nothing happened.

It won’t take long for an Aries man obsessed with a Sagittarius woman to start to show it. He has a habit of becoming obsessed with chasing the women he falls in love with, especially if they aren’t fully available.

A Sagittarius woman will always seem distant because even when in love, she never focuses on any one person for too long. She’s too busy traveling, studying, or spending time with her entourage of friends.

He’ll convince himself that if he wins her over, he can somehow rein in a Sagittarius woman. This will never work.

She marches to her drumbeat and will not follow anyone else. Aries men can be persistent and dominating. Sagittarius women refuse to be controlled by anyone.

Are an Aries man and Sagittarius woman a good match? Only if they can overcome initial tensions.

He enjoys the thrill of the chase, so her aloof nature serves to keep him interested and prevents him from becoming burned out or bored with the relationship.

Yet once she does become attached to an Aries man, rather than settling down and becoming vulnerable, she will continue to remain independent. When this relationship becomes serious, he will need to understand her boundaries.

Aries men are also independent and don’t want to be with a clingy woman. A Sagittarius woman can seem perfect for him in this regard.

Yet he will want to be the center of attention periodically and if his partner is too aloof, he may take it personally and feel rejected.

This issue, and his infamous jealousy, are the biggest problems in their romantic relationship. A Sagittarius woman has many friends and won’t cut ties with others just to make an Aries man happy.

When he’s just getting to know her, or if he is insecure from past relationships, he’ll become jealous when she pays attention to other men.

He’ll try to keep tabs on her whereabouts and she will vehemently push back. An Aries man and Sagittarius woman fighting can be an intense sight. Neither will hold back and they may become heated and aggressive.

At some point, they will go their separate ways to cool off. Will an Aries man come back to a Sagittarius woman? Usually, the answer is yes.

He will calm down and seek her out again because he is usually obsessed with his love interest. When he comes back, he’ll act like nothing ever happened.

Neither one likes to process their emotions and talk out their issues. If she’s over the issue as well, they’ll just move on and ignore the problems until the same issue surfaces again.

If she’s not ready to forgive and forget, he’ll end up chasing her all over again.

If an Aries man and Sagittarius woman’s love at first sight experience is shared, they may move quickly in love.

If she doesn’t fall in love with him right away, he may have to spend some time proving himself to her. This is typically something an Aries man enjoys doing, as he sees it as a contest to win.

When this couple is ready for marriage, they’ve usually worked through their differences and know how to accommodate each other.

Ironically, an Aries man and Sagittarius woman’s marriage compatibility is greater than their compatibility for dating and casual relationships.

By the time this pair is married, it’s more likely an Aries man’s determined and obsessive nature has cooled off slightly.

This would make many other women panic or fear he’s lost interest. But to a Sagittarius woman, this may come as a relief. She can go back to pursuing her many independent interests without him becoming jealous or possessive.

This couple can enjoy a marriage filled with excitement and pleasure. They can easily maintain a passionate connection because their sexual chemistry is high.

Both become bored easily, so they know how to keep each other engaged and entertained.

An Aries man and Sagittarius woman soulmates can work through their relationship’s initial volatility and form a loyal relationship filled with pleasure, excitement, and honesty.

Once they are married, an Aries man and Sagittarius woman’s compatibility rating becomes more solid.

Aries and Sagittarius in bed know how to satisfy each other. Their sexual relationship can help to strengthen a challenging romantic relationship. They can often diffuse tension in the relationship through their sexual encounters.

An Aries man is energetic, passionate, and loves to take risks and try new things in bed. Though Sagittarius women may not be as sexually motivated as Aries men, they are just as open to adventure and experimentation.

Both can be attentive to each other’s needs in bed. A Sagittarius woman is turned on by ideas and may be seduced by anything new or exotic. She also loves to be pampered and to make love in luxurious settings.

An Aries man will be happy to indulge her fantasies, but he may also be more impulsive and doesn’t need any special accommodations.

This couple can also sustain a friends with benefits relationship as long as both are clear that neither wants to get emotionally involved.

If an Aries man can control his obsessive and jealous nature, they can both keep feelings out of the relationship and simply enjoy their intimate encounters together.

An Aries man can be impulsive and so his style of lovemaking can seem rushed to a Sagittarius woman. Usually, she won’t complain, instead, she’ll assert her desires and help him to slow down and savor the moment.