10 Important Signs an Aries Man is Not Interested in You 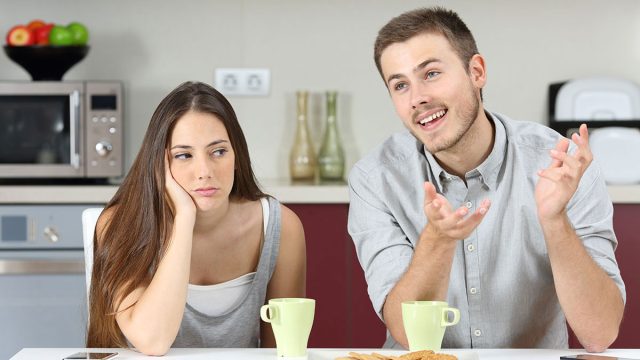 If your Aries guy is acting distant, you may be wondering how you can tell if an Aries man is not interested in you.

What are the clues that this zodiac sign is rejecting you?

For the most part, an Aries man is a very straightforward and direct communicator. You usually won’t have to guess what this sign thinks because he will say it bluntly.

But he can also be moody and mercurial, and he likes to tease the people he loves, so it’s no wonder you’re unsure whether or not he’s into you.

By learning more about his sign’s typical characteristics and behaviors, you will be able to determine if your Aries man is not interested in you.

When an Aries man stops talking to you, it’s a pretty clear indication that he has lost interest in your relationship.

Some zodiac signs will ice people out to show that they are upset, but an Aries man is more likely to confront you directly when he has a problem.

If he’s mad at you and wants to fix the issue, he will talk to you about it, even if it means having a nasty argument.

And if he’s too busy to talk, he will make it up to you by giving you plenty of attention later.

He will only ghost you when he feels like there is nothing left to say and your relationship isn’t salvageable, or to show you that he doesn’t have feelings for you.

When Aries man ignores you by never returning your calls or texts, it means he doesn’t care about you anymore.

Although he’s not necessarily physically affectionate with everyone, an Aries man is touchy and cuddly with the woman he loves.

Touch is definitely one of this zodiac sign’s love languages, and he can’t keep his hands off the person he has feelings for.

When he falls for someone, he will shower that person with attention and affection because that’s how an Aries man shows his love.

But if your Aries guy never hugs, kisses, or cuddles with you anymore, it’s a sign that he has lost his feelings for you.

If you’re not dating your Aries crush yet, pay attention to how affectionate he is with you. If he greets you with a warm hug, it could be a sign that he’s into you.

But if he avoids touching you and doesn’t make any sort of physical contact, it’s a sign that he only sees you as a friend.

3. He Doesn’t Make Plans With You

Besides physical touch, another way that an Aries guy expresses his love is by making an effort to spend quality time together.

If you want to know how to make an Aries man fall in love with you, you need to spend time with him to get to know him and show him that you have similar interests.

When an Aries man likes you, he won’t hesitate to reach out and ask you on a date. This sign isn’t shy, and he enjoys pursuing a woman.

But if he never spends time alone with you or he always seems too busy to hang out, it means that he’s just not that into you.

It’s not unusual for an Aries man to come off as rude because this zodiac sign is brutally honest and doesn’t think before speaking.

He’s not unkind, but he says things unintentionally that may hurt other people’s feelings. He also likes to use teasing as a form of flirting.

If he teases you playfully and cracks jokes at your expense, it could be one of the signs an Aries man is falling for you.

He thinks that the familiarity of playful ribbing makes people feel closer to him and shows that they have a close enough bond to make fun of each other.

But if your Aries man talks negatively about you behind your back, or is rude to your face without smiling, it means he’s definitely not interested in you.

If he talks down to you or rolls his eyes when you speak and you can tell he’s not kidding, it means he’s not into you.

5. He Talks About Other Women

An Aries man isn’t a very subtle guy, so he might go out of his way to show you that he doesn’t have romantic feelings for you.

One of the tactics he uses to show his disinterest is bringing up other women when you’re having a conversation.

He will be open about who he thinks is attractive and who he would like to get to know better, and if he’s talking about this in front of you, it’s not you.

If he talks about the other women he is interested in dating, it’s one of the clear signs an Aries man is not interested anymore.

6. He Flirts With Other Women

An Aries guy is naturally flirtatious, but he knows not to cross the line when he’s in a committed relationship.

If he even has a crush on another woman, he won’t want her to get the wrong idea if she sees him talking to another woman.

When he likes someone, he won’t flirt with anyone else. He will focus all of his attention and effort on her.

But if your Aries guy hits on other women in front of you, or you hear that he is flirting with someone else behind your back, it means he’s not very interested in you.

7. He Doesn’t Take Your Side

An Aries man never backs down from an argument, and he loves playing the knight in shining armor for a damsel in distress.

If he likes a woman, he will defend her when she disagrees with someone else. Even if he privately thinks she’s wrong, he will have her back in public.

But if an Aries man doesn’t care about you, he will stay silent when someone else attacks you.

He might even take your opponent’s side and point out what you did wrong. If an Aries guy doesn’t defend you in an argument, it means he’s not that into you.

8. He Doesn’t Laugh at Your Jokes

An Aries man is the type of guy to laugh at everyone’s jokes. He doesn’t do this to be polite – he is far too sincere and honest for that.

But an Aries man is a generally optimistic and cheerful guy, so if there’s any reason to laugh, he will join in.

If an Aries man doesn’t think you’re funny, he won’t be interested in you because having a sense of humor is important to this zodiac sign.

And he won’t smile or laugh to keep you from feeling uncomfortable when you make a joke if he’s not interested in you.

When an Aries man goes silent after you crack a joke, it doesn’t mean he didn’t understand the punchline – it means he doesn’t like you.

9. He Doesn’t Include You

There is nothing an Aries man hates more than being ignored or excluded because he takes it as a sign of disrespect. This means that when he doesn’t like someone, he won’t try to make them feel included.

When an Aries guy is into you, he will want to incorporate you into his circle of friends. He does this to make you feel welcome and to get to know you better.

But if he is always going out without you or making you feel excluded by whispering behind your back, it means he’s not interested in you.

If you want to know how to make an Aries man chase you, plan lots of fun activities with your mutual friends and invite him to join.

He likes being included and will be more likely to extend an invitation to you next time he plans an outing or event.

Some zodiac signs are more prone to jealousy than others, and Aries is a very jealous and possessive sign.

An Aries man can’t stand it when he sees the woman he loves flirting with another guy, or if another man hits on the girl he has a crush on.

When you’re trying to determine whether or not your Aries guy is interested in you, pay attention to how he acts when you talk about other men or flirt with somebody else.

If he is interested in you, he will get visibly upset. He will either throw a fit or try to insert himself between you and the other guy.

But if he doesn’t turn green with envy when he sees you with another man, don’t think it means your Aries man is hiding his feelings.

An Aries guy is too honest and impulsive to conceal how he feels. Even if he doesn’t say anything to express his displeasure, his facial expressions will give him away.

If he’s not jealous when you express interest in another guy or even when another man shows interest in you, it means that your Aries crush is not into you.