9 Signs an Aries Man is in Love with You 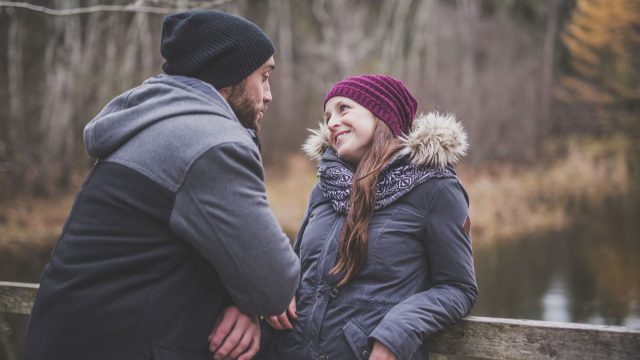 If you have been dating an Aries guy for a while and aren’t sure how he feels about you, then you need to know the Aries man in love signs.

How strong are his feelings for you?

Aries is a very forward and honest sign, so he will probably tell you directly how he feels about you if you ask.

But there are certain behaviors you can look for that will tell you if his actions match his words.

Once you know how an Aries man in love thinks and behaves, you will be able to tell whether or not he’s in love with you.

1. He Introduces You to His Friends

An Aries man keeps a close circle of friends, and he would rather have a few people he really likes in his group than a lot of acquaintances.

His friends’ opinions matter to him, so when he’s serious about a woman, he will want her to meet his friends. He wants to make sure she can fit in with his crew and that they approve of her.

He also likes to show off, so when he has found someone he thinks is really great, he will want all of his friends to know.

If your Aries guy is excited and proud to bring you around his friends, it means that he is falling in love with you.

But if he only wants to hang out with you in a group and never alone, it could be one of the signs an Aries man is using you.

And if he is reluctant for you to see his friends or hides you from them, it means he doesn’t like or respect you at all.

2. He Introduces You to His Family

Just like he cares deeply about his friends, an Aries man is also quite close to his family. He will probably have you meet his friends first before taking the step of introducing you to his parents.

An Aries guy doesn’t bring every girl he dates around his family. She has to be someone special that he thinks is going to be in his life for a while for him to introduce them.

So, if your Aries man can’t wait for you to meet his parents and siblings, it’s a clear sign that he has fallen in love with you.

Be sure to make a good impression on his family by dressing conservatively, being polite, and trying to get to know everyone.

Once you have his parents’ stamp of approval, your Aries man will fall even more deeply in love with you.

3. He Can’t Keep His Hands Off of You

Aries is a very physical sign, and touch is definitely the typical Aries man’s love language.

If an Aries guy is in love with you, he won’t be able to keep his hands off of you. He will kiss you, hug you, and hold your hand constantly.

An Aries guy isn’t necessarily touchy-feely with everyone. He reserves his affection for the people he feels strongly about.

For example, he will hug his friends and family as a greeting, but he won’t do the same with strangers or people he doesn’t know very well.

But an Aries man saves all of his passionate affection, like cuddling, kissing, and hand-holding, for you.

Sometimes, an Aries guy can be moody. He might shrug you off once in a while when you go in for a kiss.

Don’t worry that this means he doesn’t love you. He should bounce back to his cuddly self soon enough.

But if he rarely touches you, only touches you in private, or avoids physical contact with you, it means your Aries guy isn’t in love.

4. He Brags About You

Aries is a very proud and competitive sign, so when an Aries guy accomplishes or wins something, he likes to brag about it.

One of the clear signs Aries man is in love with you is when is proud of you and shows you off.

When you meet his friends and family and they tell you they have heard such wonderful things about you, it means your Aries guy has been bragging about you to them.

He will tell other people all about your amazing accomplishments, stunning looks, and incredible personality, whether it’s behind your back or in front of you.

But if you suspect your Aries guy is complaining, gossiping, or saying negative things about you behind your back, it means he’s unsure of his feelings for you.

5. He Admires and Respects You

An Aries man is highly intelligent and an excellent problem-solver. He rarely turns to others for advice because he often has the answers.

But when an Aries man respects you enough to ask for your help and wisdom, it means that he admires and loves you.

He also doesn’t like being vulnerable with just anyone, so he won’t reveal a weakness or a lack of knowledge to a woman he doesn’t care for.

He might also tell you directly how much he admires and respects you, and it should shine through his actions and the way he treats you.

If he respects you, he will listen closely to what you have to say when you’re speaking instead of interrupting or tuning you out.

And if he admires you, he will ask for your guidance and try to become more like you in some ways.

For example, if you’re a good cook, he will ask for your recipes or for you to show him how to prepare his favorite dish.

When you feel like your Aries guy admires and respects you, it means that he is probably in love with you, too.

6. He Showers You With Compliments

You rarely have to worry about an Aries man hiding his feelings because this is a very open and honest zodiac sign.

But if you happen to be dating a shy Aries guy, he might tell you how he feels about you indirectly by giving you tons of compliments.

If he showers you with praise or always has something kind and encouraging to say to you, it’s one of the signs an Aries man secretly likes you a lot.

You can push your Aries guy to tell you that he loves you by showing him that you return his feelings. Give him lots of compliments back, and he will know you feel the same way.

Since he’s so competitive, what an Aries man wants to hear is that he is the best at everything.

If you want to know how to make an Aries man obsessed with you, tell him he’s the best boyfriend you’ve ever had, and that he is the strongest, smartest, sexiest man you’ve ever dated.

If he hasn’t already said that he loves you, he surely will once you boost his ego and make him addicted to being around you.

7. He Remembers Little Things About You

Because he’s so intelligent and such a quick thinker, an Aries man’s mind is always active.

He’s a good listener, but only to the people he really cares about. He tunes out everyone else and stays in his own little world.

When an Aries guy likes you, he pays close attention to you and remembers even the tiniest details of what you say.

This doesn’t mean you should quiz him after every conversation to see how much information he retains. Instead, look for signs that he hangs onto your words.

If he looks you in the eye when you’re talking, gives you time to compose your thoughts, and lets you speak without cutting you off, it means he is paying attention.

You might mention that you like a particular author, and later he will buy you their latest work as a gift or tell you that he’s reading some of their stories to discuss with you.

He’ll memorize your coffee order from listening to you say it to the barista, or he will remind you of something you told him ages ago that even you had forgotten.

Is your Aries man not communicating with you? Here's the trick to reel your Aries back in.

8. He Puts You First

As the first sign of the zodiac, an Aries man tends to focus on number one: himself. He can be a bit selfish, and he might unintentionally ignore the wants and needs of others.

But when an Aries man is in love with you, he will always put you first. He will strive to take care of and protect you.

You will become the one person he sacrifices himself for, even in small ways. If you want to watch a romantic comedy and he wants an action movie, he’ll sit through your film choice.

If you call him with a problem in the middle of a workday, he will drop everything to help you because prioritizing you is how an Aries man shows his love.

9. He Spends All His Time With You

Aries is a fiercely independent sign, and few things are more valuable to an Aries man than his freedom.

He is social and outgoing, but he also likes time alone to rest and relax. He might be full of energy, but he is selective about who he exerts his energy on.

When an Aries man misses you and wants to spend all of his time with you, it’s a clear sign that he is in love with you.

An Aries man can’t stand having a clingy partner, and he never wants to come across as needy, either.

But an Aries man in love can’t help himself, and he will want to be around you more than anyone else.

He will still need time alone or nights out with just his friends, but when an Aries man loves you, you will be his first choice when he has extra time to socialize.

What does an Aries Man Do When He Likes You?How to Play Mind Games With an Aries Man
Hello, I'm Liz