What does an Aries Man Do When He Likes You? 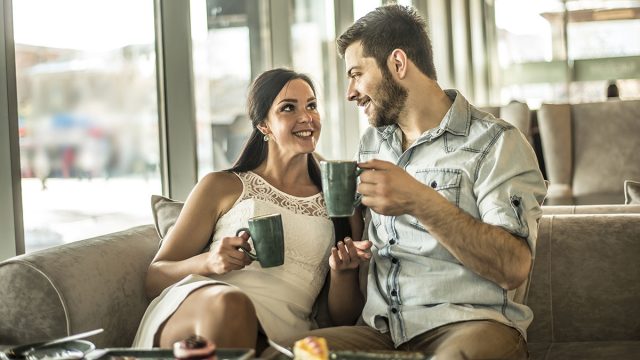 If you’re wondering how to tell whether or not an Aries man likes you, then you need to learn more about his zodiac sign.

How does an Aries guy behave when he has a crush on you?

Each sign has different ways of expressing love and affection, so you might not be able to tell if your Aries guy is just being friendly or if he’s interested in you romantically.

Aries is a very straightforward and direct zodiac sign, so the clues that he likes you should be fairly clear.

Once you have a better understanding of his astrological sign’s typical personality traits and behaviors when he is into someone, you will be able to determine whether or not an Aries man likes you.

Some signs are more reserved than others, but shyness is an unusual trait in an Aries guy. Not only is he confident and self-assured but he is also quite honest and direct.

You rarely have to worry about an Aries man hiding his feelings for you because this sign is too impulsive and expressive to keep his emotions to himself.

If an Aries man likes you, he won’t be very subtle about it. He will probably ask you out on a date or approach you directly instead of playing mind games or beating around the bush.

You should let your Aries crush make the first move because Aries is a very masculine and dominant sign.

He likes to fulfill the conventional male role in relationships, and part of that is being the one to approach the object of his desire and make the first move.

If you think he’s one of the rare shy guys with his zodiac sign and you want to encourage your Aries man, eye contact is a good way to connect with him and signal your interest.

Staring at you from across the room or sending over a drink from his side of the bar are signs a shy Aries guy likes you.

In that case, you should take his longing glances or offer of a drink as his signal that he likes you, and you can approach him.

One of the reasons it can be tricky to tell whether or not an Aries guy is into you is that this zodiac sign has a unique form of flirting.

Aries is a playful and childish sign, so an Aries guy likes to flirt by teasing the woman he likes like a little boy tormenting his crush on the elementary school playground.

When he pokes fun at your clothes or teases you about your looks, don’t take it as one of the signs an Aries man doesn’t like you.

He’s not trying to hurt your feelings or make you self-conscious; he’s actually trying to create a connection and show that he notices the little things about you.

If he didn’t like you, he would just ignore you rather than playfully insulting you. If you want to know how to flirt with an Aries man, don’t shy away from teasing him right back.

As long as the jokes don’t get too personal or hit a nerve, your Aries man will laugh along with you when you make fun of him.

He will be attracted to your wit and confidence, and it will only make him like you even more.

Aries is a very physical sign, so when an Aries guy likes a woman, it’s difficult for him to keep his hands off of her.

If you and your Aries crush barely know each other, he will find ways to initiate physical contact.

For example, he will stand so close to you whenever he gets the chance that you can feel his body heat. He will take the empty seat next to you and move as close to you as he can.

But if you’re friends or coworkers with your Aries guy, he will be even more forward and aggressive with his physical contact.

He will look for excuses to give you a hug that lasts a few seconds too long, or he’ll give you a peck on the cheek when he greets you, even though he doesn’t kiss anyone else that way.

Even seemingly friendly gestures like high-fives or a pat on the back are ways an Aries man shows that he likes you.

He Plays With Your Hair

Every sign of the zodiac correlates with a specific set of body parts. These body parts can tell us the features that sign finds most attractive on the opposite sex, as well as that sign’s erogenous zones.

Aries rules the head, including the hair, face, brain, and skull. When an Aries man likes you, he is likely to pay attention to these features.

He might compliment your hair or twirl it between his fingers. He will tug your ponytail or just run his hands through your hair to see how it feels.

He will also make eye contact with you and hold it for as long as he can. He might brush a piece of hair out of your face, or caress your cheek gently to show affection.

If an Aries guy touches or comments on your hair and face frequently, it means he definitely likes you.

If you want to know how to make an Aries man addicted to you, wear your hair long and loose. Don’t knot it up in a bun where he can’t see or feel it as much as he likes.

You should also compliment his facial features and tousle his hair affectionately to show him that you return his interest.

He Makes an Effort

Aries can be a very selfish and self-serving zodiac sign, so when an Aries guy goes out of his way and makes an effort for you, it means that he likes you.

For example, if your Aries crush is a meat lover but you’re a vegetarian, he will look up restaurants with vegetarian options before your date or take you to a meat-free place.

If he rides a motorcycle and thinks you might not want to mess up your hair in the wind, he will call a cab for you both instead of insisting on taking the bike.

Pay attention to whether or not an Aries man does little things for you that are inconvenient for him. You don’t need to set him up or test him, but try to notice if he performs these kinds of gestures.

If it feels like you’re always the one accommodating him, it could be one of the signs an Aries man is using you or he doesn’t like you very much.

Stop going out of your way for him and see how he responds. If he refuses to make an effort for you, it means he’s not into you.

He Spends Time With You

Aries is a fiercely independent zodiac sign, so an Aries man isn’t the type of guy who wants to be with the woman he likes all the time.

He needs some time to himself or with his friends to relax and recharge. But when an Aries man likes you, he will give up some of his precious freedom to be with you.

Spending quality time together is one of the typical Aries man’s love languages. If an Aries man likes you, he will be proactive about spending time with you.

He might not ask you to hang out alone with him, but it will seem like he always happens to be around. He looks for invitations from your mutual friends so he has the chance of seeing you.

Your Aries crush might show up at every party you go to, or happen to be at the same concert you attend. He’s not stalking you; he’s just making an effort to be around you.

You’ll know when an Aries guy falls in love with you when he would rather be with you than be by himself. When an Aries man misses you and you’re just in the next room, it means he’s completely smitten.

He Tries to Impress You

Aries is a highly competitive sign, and Aries men like to be the best at everything they do.

When an Aries man likes you, he will try to show off and impress you. He might brag about his career, his salary, his workout routine, or anything else he’s proud of.

He might come off as pompous, but he’s just trying to show you that he’s a catch and make you like him.

If you want to know how to make an Aries man happy, give him plenty of compliments and let him know how impressive you find him.

He likes a lady who boosts his ego, and he will be your biggest cheerleader in return.

He Asks You Deep Questions

If an Aries guy doesn’t like you, he might interrupt you constantly or glaze over while you’re talking. He won’t care about what you have to say and he won’t be respectful.

But when an Aries man likes you, he pays close attention to your words and remembers the littlest details about everything you say.

For example, you might casually mention a book you enjoyed in a conversation with him, and the next time you see him he’ll tell you that he got it from the library and wants to discuss it with you.

He will ask you deep, personal questions about yourself, and he will memorize your answers.

If you’re trying to make an Aries man want you, don’t be afraid to open up and let him get to know the real you.

He likes women who are as honest and transparent as he is, so letting him see your hidden sides will only make him like you more.