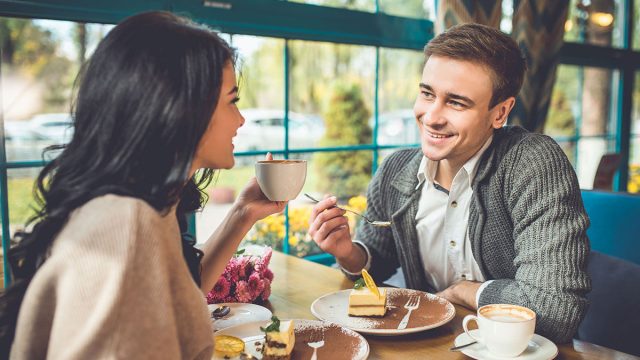 An Aries man and Libra woman compatibility is among the highest of any signs. Their signs are opposite each other in the zodiac.

This means each finds balance and harmony by connecting with the other. They are able to enhance each other’s lives and excite each other easily.

For an Aries man and Libra woman, love at first sight can be common. This pair may instantly feel a spark of connection to each other. They can complement each other in any relationship.

Aries traits are the perfect balance for women born under the Libra sign. A Libra woman can be sensitive, loving and compassionate but indecisive and passive. An Aries man is determined and focused.

Aries men and Libra women may not always agree, but amiable Libra will often respond diplomatically and avoid a conflict. An Aries man and Libra woman can usually diffuse tension easily.

An Aries man is instantly drawn to a Libra woman. Libra traits like beauty, artistic sensitivity, and friendliness attract an Aries man’s interest. Even as friends, they will instantly feel a connection to each other. An Aries man and Libra man may meet at a concert or festival, or among mutual friends.

They are both social and outgoing. Many of their interests differ. He is likely to be more athletic and competitive. She is an artistic and creative person who is diplomatic and charming. He will feel comfortable with a Libra woman because she never criticizes anyone and usually has a positive outlook.

She will find him motivating and will be charmed by his strength, confidence and courage. As friends, a Libra woman and Aries man may talk for hours. They may also enjoy going out to new places together as both love to explore and meet new people.

An Aries man may become more focused on one friend or love interest at a time as his mind can be obsessive. A Libra woman has many friends but as the sign of the scales and balance, she prefers to spend time with one specific friend for a period of time and then alternate to others.

This pair may go through cycles of being inseparable and doing everything together. Yet even when they spend time apart it is not usually seen as abandonment when they are just friends. Each has enough independence and confidence to not worry about some distance.

An Aries man and Libra woman who are friends will seldom if ever argue. She is a natural peacekeeper and will go out of her way to de-escalate his fiery temper. Yet occasionally, a careless and impulsive Aries man may say or do something that triggers a Libra woman’s anger.

She can be sensitive but will usually only become outwardly assertive if she believes he’s offended a person or group of people she cares about. Libra women are harmonious and low key unless they believe an injustice has been committed.

Yet even if this is the case, it won’t take long for a Libra woman to see that her Aries friend was being impulsive and meant no harm. This pair will usually make peace again easily and continue their friendship.

They are loyal to each other. An Aries man is protective over his Libra friend and she may seem detached at times but never forgets who her friends are. This pair can drift apart over the years and then reconnect seamlessly.

When a Libra dates an Aries, it’s usually a smooth and happy relationship. It’s also likely that an Aries man and Libra woman who are friends will want to try dating at least once. He’s passionate and caring, she is romantic and sentimental.

In a romantic relationship between a couple born under the Aries and Libra zodiac sign, each partner will enjoy a playful courtship. Usually an Aries man will be more determined to make the relationship official. A Libra woman may seem to be ready at first, but as the couple progresses she may get cold feet.

Libra women aren’t always good at narrowing their options. The fear of missing out may lead her to panic. Aries men are instinctive and know what they want right away.

They will put all of their energy into chasing the person they desire. This will seem flattering to a Libra woman at first but in time the prospect of getting serious may overwhelm her.

An Aries horoscope sign is bold, direct and determined. A Libra zodiac sign is rational, indecisive and placating. She may go along with plans in the relationship just to avoid rocking the boat, only to realize at some point that she isn’t truly happy. An Aries man who moves too fast may overwhelm a Libra woman.

Yet if he is able to take her signals and slow down at times, channeling his independent nature, things can work out well for this couple. They both have a jealous side but neither is likely to provoke jealousy in this relationship because they are equally attentive to each other.

They can balance out each other’s personalities easily. An Aries man doesn’t always consider all the options before making a decision. A Libra woman can inspire him to think in new ways. An Aries man can also motivate a Libra woman to find her own courage and follow through on her dreams.

He can be generous at heart but isn’t always good at sharing. This may bother a Libra woman in the long run, but usually she can overlook a great deal to keep the peace. At some point she may become irritated with his tendency to put himself first, but even then, an argument will usually resolve the issue if he is open to her feedback.

An Aries and Libra dating will usually succeed in the long run. In many cases, they’ll want to get married. Aries and Libra compatibility is strong enough that this couple is likely to maintain a loving long-term marriage.

Both become bored easily but also know how to keep things interesting and amuse each other. Even after years of marriage, they never become bored with each other. They are likely to maintain strong social connections to their friends and their active social life benefits both partners.

He may act like the boss of the household because he is more decisive and assertive than she is. But if something truly matters to a Libra woman, she won’t let anyone overstep her boundaries. She may be accommodating but will draw the line if an Aries man goes too far.

An Aries man will recognize that his Libra partner doesn’t make many demands, and he’ll pay close attention when she asserts her power in the relationship. He has ample energy and sometimes needs help directing it. She offers inspiration in that regard and helps him to stay positive.

He is ambitious and driven whereas she is often successful because of a mix of good connections and good luck. He may be baffled by her ability to succeed in spite of having a far more relaxed attitude than he has. Yet in this way, she can be a good role model for a high-power Aries man who often over-exerts himself.

For an Aries man and Libra woman, pros and cons can easily be weighed in favor of a relationship being successful. Their hang ups are few.

She may want him to tone it down and be more diplomatic, though she secretly admires his feisty nature. He may wish she would be more focused and ambitious like he is, but he won’t try to change her.

They both respect each other’s differences in most cases. This pair knows their differences are what makes the relationship interesting and fun. They enjoy each other’s company and usually know how to keep each other excited and happy in love.

An Aries man and Libra woman sexually excite each other right from the start. If they try to have a friends with benefits relationship, the romantic side of a Libra woman will likely kick in and she may become convinced she has deeper feelings, even if she doesn’t.

If they are in a romantic relationship, this pair will enjoy a fulfilling sexual connection as well. Their chemistry is off the charts. An Aries man is far more adventurous than a Libra woman but a Libra woman will find it easier to take risks and try new things with the encouragement of an Aries man.

Both an Aries man and a Libra woman need frequent changes in routine in order to feel satisfied and fulfilled. An Aries man who is not attuned to his Libra partner may miss her sometimes subtle cues when she is not in the mood or uncomfortable trying something new.

Yet if they are in tune with each other, this couple can enjoy a passionate, romantic, sensitive and adventurous intimate relationship. She helps him to slow down and enjoy sensual experiences. He may be more passionate but she will remind him of the importance of affection and pampering.