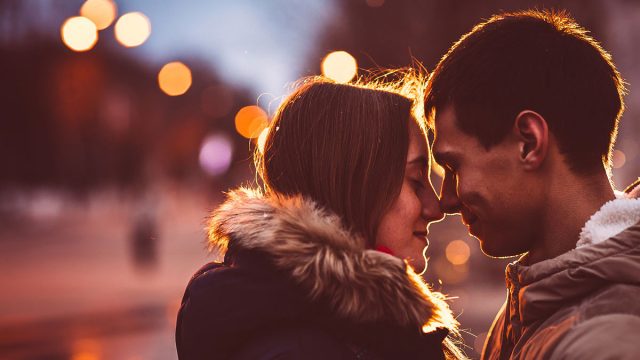 If you’re dating an Aries guy, then you need to know the typical Aries man’s kiss preferences.

How does an Aries man like to kiss a woman?

Some zodiac signs prefer soft, tender kisses, while others are more hungry and passionate when it comes to physical contact with a romantic partner.

You don’t want to turn off the Aries guy you’re seeing by giving him an unpleasant kiss, so how can you tell what he likes?

You will know how to kiss an Aries man and win his love by learning more about his zodiac sign’s characteristics and behaviors in love.

He Likes to Kiss You First

Aries is a dominant and masculine sign, so even women born under this zodiac sign tend to have more masculine energy.

This means that Aries men in relationships like to take the traditional male role. An Aries guy wants to pursue the woman he likes, and he enjoys the thrill of the chase.

Let your Aries guy be the one to kiss you first. This is the relationship dynamic he prefers, and it will make him feel more comfortable with you.

If you want to know how to get an Aries man to kiss you, show him that you return his interest and set up opportunities for him to make a move.

For example, if you’re in a group setting, pull him aside to talk to him alone. Lean in closely so your faces are almost touching and smile encouragingly with your lips closed, then let him do the rest.

Every sign of the zodiac is guided by a particular heavenly body that tells us something important about that sign.

Aries is ruled by Mars, the planet of passion, war, and aggression. The influence of Mars tells us that an Aries man is sexually aggressive and fervent.

When an Aries man kisses you, it might feel like he has been starved of affection for years.

He will kiss you like it’s the first time he has ever kissed a woman and the last time he ever will because he is so passionate and forward.

Each zodiac sign also correlates with one of the four natural elements: earth, fire, water, or air. The natural elements tell us about the temperament and emotional style of the signs.

Aries is a fire sign, so it’s no surprise that his personality, as well as his kissing style, is fiery and passionate.

His kisses are hot and feisty, just like the inner flame he has thanks to his sign’s natural element.

Try to be an aggressive kisser like your Aries guy, and don’t get turned off by his intensity. If you prefer lukewarm, tepid kisses, then an Aries man might not be the right guy for you.

An Aries man is typically a little rough around the edges, and that includes his kissing style.

Instead of giving you soft, gentle kisses, an Aries guy is more likely to be rough and strong.

He’s not the type of guy to carry around chapstick or be clean-shaven, so not only is his kissing style rough but his texture is, too. His hard lips and prickly stubble will feel very masculine against your smooth face.

An Aries man is laid-back and low-maintenance when it comes to his personal style, so he probably won’t worry about brushing his teeth or chewing gum every time that he kisses you.

He will roll over in bed and make out with you first thing in the morning, regardless of whether or not either of you has morning breath.

An Aries guy simply doesn’t care about that kind of thing; he just wants to feel close to his partner.

This means that the typical Aries man’s personality is childlike and playful, so his kissing style is, too.

He might smother your face with kisses like an affectionate puppy, or shyly kiss you in the dark like a teenage boy at his first school dance.

He even likes silly, youthful kissing games like spin the bottle or seven minutes in heaven, or he will look for mistletoe in the winter months so he can kiss you underneath this traditionally romantic plant.

If you want to know how to kiss a man born under the sign of the ram, keep it playful and light-hearted. Don’t try to be too serious or over-the-top romantic when you’re kissing your Aries guy.

His ideal woman is someone that can be his best friend as well as his partner, so make sure you’re both laughing as much as you’re kissing.

An Aries man is quite mercurial, so he is prone to mood swings. He could be laughing and cracking jokes one minute, then frowning and pouting the next.

An Aries man is hot and cold, and you can never be too sure which side of him you’re going to get. That’s just part of the unpredictability and excitement of dating an Aries guy.

Most of the time, an Aries man will want rough, intense, passionate kisses. But other times, he can be a bit standoffish.

When your Aries guy isn’t being as touchy-feely as he normally is, don’t worry that it’s a sign he has lost interest in you.

It doesn’t even mean that he doesn’t want to kiss you. But instead of making out or being aggressive, he might just want a little peck on the cheek.

When your Aries guy is being cold, he will probably still hold your hand or give you little kisses. Don’t try to initiate anything more, or he might feel suffocated and smothered.

Reciprocate by giving him sweet, chaste pecks in return, and don’t worry about his aloofness. He will probably return to the hot and heavy kissing style you’ve come to expect from him in no time.

While your Aries guy will have his moments and days when he just wants gentle little pecks, most of the time an Aries man prefers intense makeout sessions.

As a fire sign, an Aries man struggles with moderation. He likes to take everything to the extreme, so usually, a little kiss on the cheek won’t be enough to satisfy him.

And as the youngest sign of the zodiac, an Aries guy struggles with impulse control. When he wants to feel close to you or kiss you, he wants to do it right away, and all the way.

He will even engage in a heavy makeout session in public, without worrying who might be watching or that he could be making others uncomfortable.

He might leave you with love bites, beard burn, or other marks of his affection because he likes to make out so much.

Get ready for lots of intense, heated making out if you’re dating an Aries guy because this is one of his preferred forms of affection.

He Kisses to Initiate Intimacy

Aries is a very sexual and energetic sign, so an Aries guy has a high libido. Not many zodiac signs can compete with the sex drive of an Aries.

Sometimes an Aries man will use kissing as a way to initiate intimacy. He will start by giving you a passionate kiss that turns into a makeout session, which then leads to sex.

This doesn’t mean that every single time an Aries man kisses you he is trying to have sex with you.

But if you’re cuddling together in bed or on the couch and your Aries man leans in for a kiss, he might try to take things to the next level.

If you want to know how to turn on an Aries man, all you have to do is give him hot, passionate kisses.

Take his face in your hands and pull him close. Make noises of encouragement to show you enjoy what he’s doing with his lips and tongue.

Then run your hands up and down his body, and wait for him to do the same. He will understand what you want without you having to say a word.

He Kisses in Public

The typical Aries man is bold and confident, and he is more concerned with himself than others. These personality traits are the perfect combination for someone who likes to kiss in public.

An Aries man has no problem with public displays of affection and he never shies away from PDA.

Your Aries guy will probably kiss you in front of his friends, family, coworkers, strangers, and anyone else who happens to be there.

Although he’s not really the jealous type, Aries is territorial and possessive. One of the reasons he likes public displays of affection is because they show the world you belong to him.

If another man flirts with you or is eyeing you from across the room, your Aries guy will probably throw his arms around you and pull you in for a big kiss to show that you’re taken.

He can’t be with someone that always refuses his advances in public, so let your Aries guy give you at least some soft, sweet kisses on the cheek when you’re in front of other people.

He Kisses Your Face and Head

Every sign rules a set of body parts that are particularly important to that sign. Aries rules the head, face, and hair.

This means that an Aries man’s favorite body part to kiss is your face and head. He might give you a cute peck on the forehead, or the top of your head if he’s taller than you.

Don’t wear too much makeup when you’re seeing your Aries guy because he will kiss it all off.

He doesn’t want to be hindered by sticky lip gloss or have you leave a foundation mark on his clothes, so go for a fresh-faced, natural look when you’re planning on doing some kissing with your Aries man.

Is The Aries Man Jealous and Possessive When in Love?What does an Aries Man Do When He Likes You?
Hello, I'm Liz