Flirt With an Aries Man by Making Eye Contact 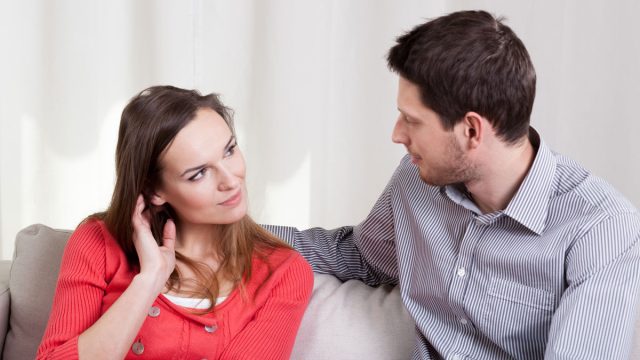 If you’re trying to flirt with an Aries man, eye contact is one of the best ways to grab his attention and make him approach you.

The typical Aries guy isn’t shy, so he won’t hesitate to make eye contact with you if he’s attracted to you.

But what does his lingering gaze mean, and how can you reciprocate his flirtatious eye contact effectively?

Once you understand more about this zodiac sign’s personality and flirting style, you will know why you should make eye contact with an Aries man and the best ways to do it.

Eyes Are Important to Him

To fully understand why eye contact is so crucial to an Aries man, you need to know his zodiac sign’s correlated body parts.

Every star sign has a specific set of body parts that reveal something important about that sign.

These body parts could be their best features, the limbs that cause health problems, or the parts that the zodiac sign is most attracted to in others.

Aries rules the head and skull, including hair and some of the facial features. Aries rules the eyes, making eye contact significant to an Aries man.

To Aries, eye contact is the best way to connect because the eyes are the window to the soul. He thinks he can read you through your eyes, and making eye contact proves your honesty.

Aries is a very open, honest, and direct zodiac sign, so making eye contact with an Aries man is a way of showing how truthful you are.

He doesn’t like sneaky, deceptive people who hide their faces and avoid eye contact, so make sure to meet his gaze.

If you want to know how to make an Aries man obsessed with you, wear makeup and jewelry that highlight your eyes.

Put on eyeliner, colorful or sparkly eyeshadows, and plenty of mascara. Wear a pendant or earrings that match your eye color.

When your Aries guy catches your eye, you will take his breath away with your mesmerizing, beautiful eyes.

Some zodiac signs make eye contact because they are too shy to flirt any other way, but this isn’t the case for an Aries guy.

The typical Aries man is bold and aggressive, so he usually won’t be too shy to make a move on you.

But making eye contact isn’t his way of showing that he’s scared to flirt with you; it’s his primary method of showing interest in you.

If you want to know how to make an Aries man chase you, you have to find out if he’s attracted to you first.

Watch him to see if he tries to catch your eye from across the room. Or, if you’re having a conversation with him, pay attention to whether or not he makes unnecessarily prolonged eye contact.

When an Aries man stares deeply into your eyes, either from afar or up close, it means he’s interested in you.

He Stares at You From Across the Room

An Aries man won’t just try to make eye contact with you while he’s talking to you. He will also stare at you from afar.

If you’re wondering, “What does it mean when an Aries man stares at you?” The answer is that his gaze means he’s attracted to you.

He stares at you from across the room for many reasons. The first is that he’s trying to catch your eye and see if you reciprocate his interest.

The second is that he is so attracted to you that he can’t keep his eyes off of you. He thinks you are beautiful and wants to keep you in his sight.

The third is that he wants to observe you and see how you move and interact with others. He is trying to read your body language to learn more about you and determine whether or not you are single.

He watches how you talk to other men, and he keeps an eye out for a boyfriend or a date who might accompany you.

If you are curious about how to know if an Aries man has a crush on you, sneak glances at him when he’s standing or sitting far away from you to check if he’s looking at you or not.

If he catches your eye and holds your gaze instead of looking away, it means he’s attracted to you and wants to know more about you.

Some zodiac signs value appearances more than others, and while an Aries man is far from shallow or superficial, he needs physical attraction to be with a woman.

One of the reasons he makes intense eye contact and stares at you is because he is taking in your beauty.

To make an Aries man want you, you have to impress him with your looks. He is a very physical sign, so he likes a strong, fit, and sexy woman.

If you want to catch his eye, you’ve got to look your best when you’re around him. Wear figure-flattering clothes, and pay special attention to your hair and makeup.

As the zodiac sign ruling the head, an Aries man is especially drawn to a woman with beautiful hair, eyes, and skin, so accentuate these features to make him notice you.

He Makes Sure You’re Watching Him

The typical Aries guy loves attention, and he will happily compete with other men to make a woman notice him.

He makes frequent eye contact with you to make sure that you’re watching him so he can show off for you.

When he’s doing something eccentric or ostentatious, like speaking loudly or showing off a trick he can do, it means he’s trying to get your attention.

Don’t be afraid of watching him shamelessly while he shows off. He wants you to notice him, so you don’t need to politely ignore him when he’s being conspicuous.

Challenge Him by Holding His Gaze

An Aries man has a dominant and charismatic personality, but this doesn’t mean he wants a weak or submissive woman. He is much more attracted to somebody who is as headstrong and confident as he is.

An Aries guy is very competitive, so he will make eye contact with you to see how bold you are.

If you want to know how to beat an Aries man at his own game, challenge him by holding his gaze. He will refuse to break eye contact, so doing the same will show him how confident you are.

If you can beat an Aries man at a staring contest, he will have no choice but to come over and talk to you.

And if you’re already in a conversation with him, outlasting his eye contact will show him that you’re as dominant and brave as he is.

If you’re wondering how to flirt with an Aries man, you should try doing something provocative with your mouth while holding his gaze.

Make eye contact with him while you sip seductively from your drink. If you want to be more aggressive, you can lick or bite your lips while staring at him.

You can even try applying lip gloss while making eye contact. Anything you can do to draw attention to your mouth while he has his eyes on you is sure to make him go crazy for you.

Don’t Be Shy and Look Away

When an Aries man stares at you, he’s trying to lock eyes with you. He doesn’t want you to look away shyly or act embarrassed by his attention.

He likes it when a woman plays a little hard to get, but ignoring his eye contact is the same thing as rejecting an Aries man.

One of the reasons he tries to catch your eye is to gauge your interest in him. If you look away too quickly, he’ll think that you aren’t attracted to him and that you don’t want him to approach you.

And if you avoid his gaze while you’re talking to him, he will think that you have something to hide or that you’re trying to escape from him.

If you want your Aries guy to stay focused on you, don’t act like a wallflower and shy away from his eye contact. Meet his gaze to show him that you like him, too.

You can flirt with an Aries man and drive him crazy with lust if you make intense eye contact while doing another activity with your hands or the rest of your body.

For example, if you’re on the dance floor and feel your Aries man’s eyes on you, lock eyes with him while you continue to show off your best moves.

If you’re playing a game with him like pool or checkers, keep your eyes on him while you make your move.

His jaw will drop when he sees your sexy display of eye contact, and he won’t be able to stay away from you.