How to Avoid Making an Aries Man Break Up with You 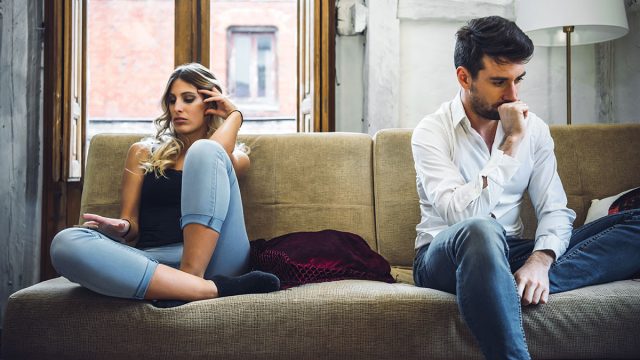 If you’re dating and in love with an Aries man, a breakup is probably something you’re hoping to prevent.

What can you do to keep an Aries guy and make sure he doesn’t dump you?

Every zodiac sign has different wants and needs in a relationship, so understanding his star sign is the first step to keeping your Aries man.

What behaviors should you avoid, and what should you do to make him want to stay with you?

Once you have a better understanding of his astrological sign’s personality and behaviors in love, you will know how to stop an Aries man from breaking up with you.

Some star signs are more clingy than others, and Aries is one of the least clingy signs of the zodiac.

He doesn’t want or need to be with this partner constantly because he needs plenty of time to himself or with his friends.

He can’t stand having a clingy partner, so when a woman is too needy and desperate, it turns him off and makes him want to get away from her.

If you want to know how to keep an Aries man chasing you instead of running away from you, you have to avoid being clingy and needy.

He has to realize that he misses you to know that he cares for you. If you’re wondering how to make an Aries man miss you, you have to take some time away from him.

This doesn’t mean that you should ignore or neglect him. He will get upset and move on if you deliberately refuse his advances or go days without talking to him.

But you should have a lot going on outside of your relationship, such as work, hobbies, and social life, to keep you from driving your Aries man away with clinginess.

The typical Aries guy is adventurous and thrill-seeking. He likes activities that give him an adrenaline rush and make his heart race.

If you want to keep your Aries man from breaking up with you, you have to show him how exciting it is to be with you.

Plan exhilarating and stimulating dates, like going bungee jumping or taking him to an amusement park to ride roller coasters.

Don’t let your relationship get stagnant by having every date night be a delivery meal in front of the television. Your Aries guy will get restless and bored if you never do anything thrilling together.

Don’t Try to Control Him

Aries is one of the most fiercely independent signs of the zodiac sign. An Aries man can be a bit bossy and he hates being told what to do.

Manipulating or trying to control an Aries guy is a sure way to make him break up with you. He tends to rebel against authority figures, and he certainly doesn’t want a partner who restricts him.

If you’re wondering how to make an Aries man chase you instead of push you away, you can’t try to dominate or manage him.

You have to give him plenty of freedom, and you should never boss him around. Give him advice or motivate him when he asks for it, but don’t try to control or change him if you want to keep him.

An Aries man’s friends and family are very important to him, so once he starts to take you seriously, he will want you to meet his favorite people.

He needs to see how you interact with them and if you can fit into his world. But if he avoids introducing you to his crew, it’s one of the clear signs an Aries man is using you.

To win your Aries man’s heart and keep him from dumping you, you have to win over his friends and family, too.

An Aries guy is an independent thinker and he can be a bit rebellious, so he will still date someone his family and friends don’t like.

But he would much rather be with someone who gets along with everyone else in his life, and he will be impressed when you charm the people he cares about the most.

Have Fun With Him

The typical Aries guy is fun-loving, and he doesn’t take anything in his life too seriously. What he wants in a partner more than anything is someone he can have fun with.

He yearns for a partner who can be both his best friend and his lover. He has a very playful and even childish personality, and he’s not attracted to someone too stoic and serious.

If you want to know how to make an Aries man obsessed with you and prevent him from dumping you, you’ve got to have fun with him.

He’s very independent, so he would rather be single than settle for a partner who brings him down and decreases his quality of life.

To keep your Aries man, make an effort to be fun and playful with him. Don’t let your relationship get stuck in a rut by being too serious and forgetting to enjoy the little things together.

Play games with him, tease him, and make him laugh. He should look forward to spending time with you because he knows you make any situation more fun.

Be Active and Energetic

Aries is one of the most energetic zodiac signs. An Aries man is always on the go, and he fights sleep in favor of working on his projects and socializing.

He needs a partner who can keep up with his energy level and who likes working out as much as he does. He won’t stay in a relationship with a lazy couch potato.

To keep your Aries man interested in you, show him that you are as active and energetic as he is. Join him when he goes to the gym, or challenge him to a game of basketball.

The twelve zodiac signs are divided into two categories, positive and negative, with six signs in each group.

Aries is one of the positive signs, which means that an Aries man is generally cheerful and optimistic. He can be moody and cynical at times, but he is typically more positive than negative.

Although an Aries guy is capable of cheering up a negative partner, he doesn’t want to feel weighed down by constant negativity.

If you want to know how to make an Aries man happy, you’ve got to avoid complaining too much. Don’t vent all your frustrations to him or only text him to whine about your day.

You don’t have to hide your emotions from him, and he will help make you feel better when you’re blue. But you should try not to whine too frequently, and make sure to voice more positive opinions than negative ones.

Some zodiac signs are naturally more affectionate than others. Since Aries is such a physical sign, it makes sense that affection is one of the typical Aries man’s love languages.

When he cares about you, he won’t be able to keep his hands off of you. He will cuddle, kiss, and hug you, even in public, because that’s how an Aries man shows his love.

If you want to know how to make an Aries man addicted to you, you’ve got to be affectionate towards him.

He doesn’t need you to touch and kiss him constantly because sometimes he needs a little space. But he can’t be with someone cold and standoffish, either.

To keep him happy in your relationship, snuggle in bed with him and hold his hand when you’re out in public together.

An Aries man likes an affectionate partner, so he will be more inclined to keep you around if you demonstrate your love for him through physical touch.

An Aries man can be a bit selfish and careless about other people’s feelings, but when he’s in love, there’s nothing he won’t do for his partner.

When an Aries man loves you, he will do things for you that he wouldn’t even consider for anyone else.

But if you want to avoid making him break up with you, you have to show some appreciation for all that he does for you.

A simple thank you goes a long way towards keeping an Aries guy happy. When he brings you coffee in bed or takes out the trash for you, make sure to tell him how much you appreciate him.

What an Aries man wants to hear is that you notice and acknowledge how special he is and how he makes your life better.

You can find other ways to show your appreciation too, such as buying him thoughtful gifts or doing helpful chores for him.

As long as your Aries guy knows that you don’t take him for granted, he will be unlikely to break up with you.