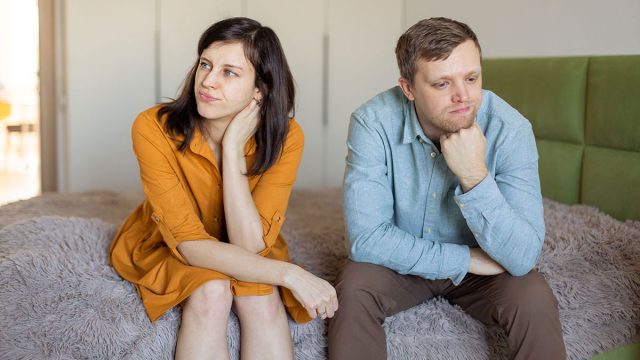 If you’re worried your relationship with an Aries guy is about to end, you need to know the Aries man breakup signs.

How can you tell when he’s about to dump you?

Every zodiac sign handles dating, relationships, and breakups differently. What could signal disaster for one sign’s relationship might not be an issue at all for another sign.

So, what are the clues that your Aries man isn’t into you anymore and he’s thinking of breaking up with you?

Once you know more about his zodiac sign’s behaviors in love and psychological characteristics, you will be able to recognize the signals that an Aries man is about to dump you.

1. He’s Irritable Around You

One of an Aries man’s negative traits is that he’s quick to anger. The typical Aries guy has a short fuse and an explosive temper.

It’s not uncommon for him to lash out at his partner when he’s upset. Don’t take a little irritability as a sign that your Aries guy is going to dump you.

But if you’re wondering, “How long does an Aries man stay mad?” The answer is that he is as quick to forgive and get over whatever made him upset as he is to get angry in the first place.

If your Aries guy holds a grudge against you or seems to get upset with everything you do, it means he’s about to break up with you.

It’s normal for him to be angry and irritable sometimes, but if you feel like you’re always walking on eggshells around him, it doesn’t bode well for your relationship.

Aries is one of the most independent signs of the zodiac, so it’s not unusual for an Aries man to take some time away from his partner to be alone or hang out with his friends.

Don’t be alarmed when he asks for a night to himself or he wants to go out with his guy friends without you.

These aren’t signs that an Aries man is not interested in you anymore; it just means he needs a little space and freedom.

But if he deliberately avoids you and refuses to make plans with you, it’s a clear indicator that he’s going to break up with you.

When he’s suddenly too busy to spend any time with you and he won’t commit to a time to go on a date, he’s probably close to ending the relationship.

An Aries man isn’t the type to be glued to his phone, constantly texting and calling his friends. He pays more attention to whoever is in front of him than his phone.

If your Aries man is not texting back right away, don’t be alarmed. He’s probably just too busy to check his phone and will get back to you later.

But if he never responds to your messages at all, even when you ask him direct questions, it means he’s not interested in talking to you.

It’s never a good sign when an Aries man stops talking to you. Don’t assume that your Aries man is playing games and trying to get you to chase him.

He’s probably telling you indirectly that he doesn’t want to talk to you and that a breakup is coming soon.

4. He Doesn’t Compliment You

Aries men in relationships enjoy flattering their partners. An Aries guy will shower you with compliments when he is in love with you.

He won’t hold back his feelings for you, and he will constantly tell you how much he admires you and all of the qualities he loves about you.

But when your Aries partner is losing interest in you, he won’t compliment you as much anymore. He’ll stop paying attention to the good things about you.

If you find yourself fishing for compliments and begging for him to notice when you look nice or have accomplished something, it means your relationship is in trouble.

An Aries man can be very complimentary, but he can also be quite critical and brutally honest. Sharing a few criticisms with you is normal for an Aries guy, and you have to have thick skin to take his truthfulness.

For example, if you ask him how your new dress looks and he doesn’t like it, he will tell you, no matter how much he loves you. He believes honesty is more important than sparing your feelings.

A little bit of criticism is normal in a relationship with an Aries man, but it shouldn’t feel like all he does is pick at you and look for ways to put you down.

If you feel like nothing makes your Aries man happy, it doesn’t mean that you’re doing something wrong. It means that he has lost interest in the relationship.

When he is constantly criticizing you and pointing out your flaws, and his critiques of you outweigh his compliments, it means he’s close to breaking up with you.

6. He Compares You to Others

Aries is naturally one of the most competitive signs of the entire zodiac. An Aries guy never backs down from a challenge, and he loves to win.

He is even competitive when it comes to his partner. When he’s in love with you, he might compare you favorably to others by saying how much cooler, smarter, and prettier you are than everyone else.

He will show you off to everyone and brag about your personality, looks, and achievements.

But when he’s falling out of love with you, he will find your deficiencies and point out how you don’t measure up to others.

He might even try to hide you from his friends and family because he’s ashamed or embarrassed to be seen with you.

When he’s in love with you, he will adore everything you do and everything about you. But if you’re about to lose him, you will feel like you have to work hard to impress him and earn his love.

If he tells you that he wishes you could be more like his guy friends or his ex-girlfriend, it means he is going to dump you.

Aries is a very physical and aggressive star sign, so the typical Aries guy is quite affectionate when he’s in love.

He enjoys cuddling, kissing, and caressing his partner, and he’s usually not one to shy away from PDA.

He can be moody, so sometimes he might push you away when you try to kiss him in public or snuggle with him in bed. But for the most part, he is very loving and touchy-feely with his partner.

If you’re wondering how to know when an Aries man is over you, he will suddenly stop being affectionate towards you.

He won’t hold your hand in public anymore, and he will sleep on the edge of the bed instead of cuddling with you.

His physical touch is an indicator of how he’s feeling towards you, so if he’s consistently not being affectionate, it means he has fallen out of love with you and a breakup is imminent.

Just as affection is important to an Aries guy and one of his love languages, sex is also a clear indicator of his feelings for you.

As a highly energetic and physical sign, the typical Aries guy has a high sex drive. He needs a partner who can keep up with his libido.

Every zodiac sign has a ruling planet that tells us something important about that sign. Aries is ruled by Mars, the planet of war, passion, and aggression.

The influence of Mars makes an Aries man sexually aggressive. He has a dominant and forceful personality, so he’s not afraid to let his partner know when he’s in the mood for physical intimacy.

Since sex is such an important part of a romantic relationship for any Aries guy, it’s a bad sign when your Aries partner stops initiating intimacy.

If you find yourself having to work too hard to make an Aries man want you sexually, it means that he has lost interest in the relationship and will probably break up with you soon.

9. He Doesn’t Consider Your Feelings

One of the typical negative traits of an Aries man is selfishness. Aries can be a very self-centered and egocentric sign.

He is very independent and tends to put himself before others, so he doesn’t often consider how his actions affect other people and he doesn’t worry a lot about their feelings.

But when he’s in love, an Aries man will be very considerate of his partner. He will put her first, even before himself, and he will always try to keep her happy.

If your Aries guy is about to break up with you, he will stop prioritizing you and considering your feelings. He might become insensitive with his words, or he will make plans without asking you first.

When it feels like your Aries partner is only looking out for himself, it means that he is mentally preparing to be single again.

What is The Best Match For an Aries Man?9 Important Things to Make an Aries Man Commit
Hello, I'm Liz