How do Aries Men Show their Love and Affection 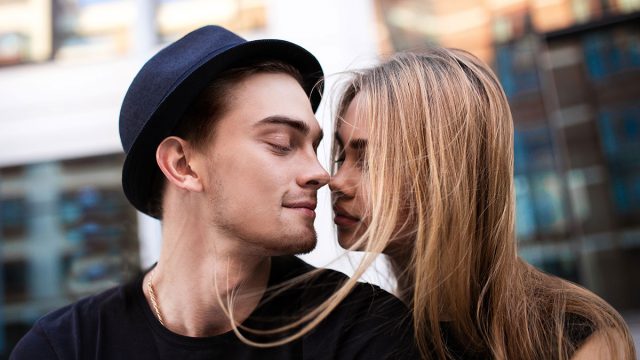 If you are hoping to win an Aries man’s affection and attention, then you need to know the signs that he cares for you.

Aries is a very physical and forthcoming zodiac sign, so it shouldn’t be too difficult to tell how an Aries guy feels.

But each sign has different approaches to affection, and learning more about the zodiac can help you discern these nuances.

When you have a better understanding of his zodiac sign’s typical traits and behaviors, you will be able to recognize how an Aries man expresses love and affection.

Every sign of the zodiac correlates with a specific set of body parts. The parts are assigned in order of the zodiac, starting at the top of the head and working through all twelve signs down the body.

These body parts are likely to be that sign’s most attractive features, the parts they like the most in the opposite sex, or the limbs that cause the most health problems.

As the very first sign of the zodiac, Aries is associated with the head, brain, and face. This means that hair is also connected to Aries, and it’s a feature an Aries man finds very attractive on a woman.

He is probably very vain about his own hair, and he might proudly show it off with a unique haircut or colorful hair dye.

He appreciates long, thick hair on a woman because he shows affection by running his hands through or playing with her hair.

If he compliments your hairstyle or can’t keep himself from touching your hair to feel the texture, it’s one of the signs an Aries man secretly likes you.

As the zodiac sign ruling the head and face, an Aries man is very attracted to a woman’s facial features.

He likes it when a lady has something quirky or unique about her face, such as a scar or a birthmark that makes her stand out.

If he makes intense eye contact or compliments you on any of your facial features, these are some of the typical Aries man falling in love signs.

He might reach over during a conversation to tenderly stroke a lock of hair out of your eyes, or he will impulsively give you a kiss on the cheek when he sees you.

If you’re the kind of girl that wears a lot of makeup and dislikes it when a guy touches your face and smudges all of your hard work, then an Aries man might not be the ideal match for you.

An Aries guy is very touchy-feely and affectionate with his partner, and the head, hair, and face are the parts he reaches for most frequently.

Although he might not be comfortable being affectionate with strangers or people he doesn’t know very well, an Aries guy can’t keep his hands off of his romantic partner.

Aries men in relationships are very affectionate because they are physical beings in general.

They are rough, tough, and like to play sports and get dirty. It should come as no surprise that such a tactile, corporeal guy is so physically affectionate.

Touch is certainly the typical Aries man’s love language, and when he likes a woman, he wants the world to know it.

You never have to worry about an Aries man hiding his feelings because Aries is a very honest and direct zodiac sign.

When he’s dating someone, he will hold her hand, kiss her, and cuddle with her in public. He doesn’t care who sees, and he can even be a bit of a show-off when it comes to PDA.

One of the things that might make it hard to know if an Aries man likes you is that he can be a bit childish when it comes to flirting.

If you want to know how to tell if an Aries man likes you, pay attention to whether or not he teases and pokes fun at you.

He is like a little boy on the playground at school that will tease his crush mercilessly. He might make fun of the way you walk, talk, dress, and behave because he likes you.

It’s not that he’s trying to be harsh or mean; it’s just his way of showing familiarity and joking with you.

It’s better to have an Aries man teasing and insulting you than ignoring you. If he doesn’t pay you any attention at all, it’s one of the signs an Aries man is not interested.

But if he’s into you, he might poke and prod at you because it’s this aggressive and combative zodiac sign’s form of flirting.

As the zodiac sign that rules the head and brain, an Aries man is quite witty and intelligent.

He values a smart woman that can hold an intellectual conversation with him. He likes exchanging quick quips and playful banter with the object of his affection.

An Aries man doesn’t want to be with a dim-witted, naive girl. He wants to be with someone who is his intellectual equal.

When an Aries man engages in flirtatious conversation with you, he’s not just passing the time or making small-talk.

Having a sexy, playful talk is one of the ways that he expresses love and affection, and it means he really likes and respects you.

Since Aries is such a physical sign, public displays of affection come naturally to an Aries guy.

But he isn’t sensual and cuddly with just anyone. He might make out with a one-night stand in public, but that doesn’t mean he will snuggle with her after a romp between the sheets.

He reserves cuddling for a person he genuinely cares about, like a girlfriend. As tough and intimidating as he might seem, deep down an Aries man is really just a soft teddy bear.

When he has feelings for you, he will spoon and cuddle with you in bed all night long. He will wrap his arms around you and pull you into a comforting bear hug.

Although he might not want to admit it, an Aries man likes being cuddled, too. Hold him in your arms and be affectionate with him in return if you want to win him over.

As the first sign of the zodiac, an Aries man is always looking out for number one: himself. He is highly independent and can’t stand having a clingy, needy partner.

Even when he’s in a committed relationship, an Aries guy needs plenty of time alone to maintain his individuality.

He values his freedom and independence, and he won’t be with a woman who makes him feel stifled and suffocated.

But if you are wondering how to tell if an Aries man loves you, he will want to spend as much time with you as possible.

This sign doesn’t play mind games when he’s in love, so he will ask you on a date and go out of his way to make plans with you if he cares about you.

This doesn’t mean that he will spend all of his time with you – he is the kind of guy that still needs nights out with his friends or private time to relax and recharge.

But if he wants to see more of you, he will let you know by inviting you to events or asking you out to dinner.

Aries is one of the most confident signs of the zodiac, so when an Aries guy is proud of something, including his girlfriend or his relationship, he shows it off.

If an Aries man likes you, he will brag about you to his friends, family, coworkers, and anyone else who will listen.

He will adore everything about you, and he won’t be able to stop himself from gushing over your accomplishments and positive qualities to everyone.

When an Aries guy has feelings for you, he will want you to meet his friends and family so he can show you off to them.

He knows that you’re a catch, and he wants to proudly put you on display for the world to see.

But if an Aries guy tries to hide you or is reluctant to let you meet his loved ones, it’s probably a sign that he doesn’t have strong feelings for you or he doesn’t take you seriously.

Aries is a selfish and egotistical sign, so an Aries guy tends to put himself first and talk over other people in a conversation.

It’s not that he’s a bad listener; he’s just highly intelligent and impulsive, so he often thinks he has more to contribute to a discussion than others.

But when an Aries guy likes you, he will respect you enough to listen carefully to what you have to say without interrupting.

To an Aries man, eye contact and listening quietly while you speak is a sign of his feelings for you.

He absorbs what you’re saying and takes the time to consider your words, instead of just waiting until you finish speaking so he can fire back with whatever he was thinking about while you were talking.

An Aries man shows his love by remembering the little details you tell him, like what your favorite dessert is or what your pet’s name was when you were growing up.

He will retain that information and then surprise you with your favorite sweet treat later to show that he was paying attention.

5 Aries Man Spirit Animals That Best Represent HimWhat to Do When Your Aries Man is Angry?
Hello, I'm Liz