How to React to an Aquarius Man Silent Treatment 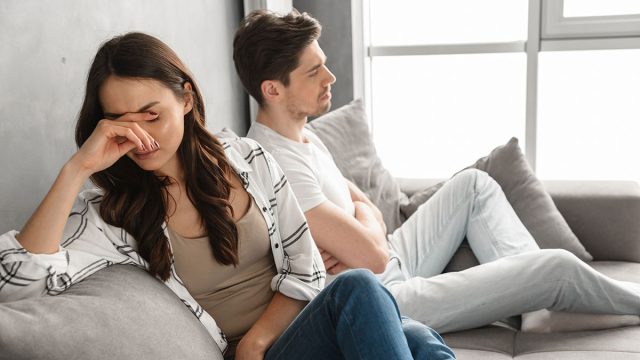 When you date a water bearer, expect to receive the world-famous Aquarius man silent treatment at some point or another.

Is your Aquarius man upset? Are they thinking of breaking up? Why are they so cold and distant suddenly?

Figuring out what’s going on in their complex mind can be next to impossible especially for those new to the territory and receiving the silent treatment for the first time.

Their silence might be a sign that they need some time alone. Or they might be acting detached simply because they are too busy with work.

If you want to maintain a long and healthy relationship with your water bearer, it’s essential to know the right way how to react to an Aquarius man silent treatment.

Give Him His Space

Aquarius have a tendency to put up walls around them, which can be scary for those who find themselves on the outside of it.

If you find yourself at crossroads with an ignoring Aquarius man, it’s usually best to let them be. Give him time and space because most often, that is all they need.

They are closed shells and not very apt at dealing with overwhelming emotions. So, be it personal or professional life, if they are going through a tough time, they would want to get things sorted on their own.

During this time, your water bearer might shut you out both emotionally and physically.

Don’t let it take a toll on your relationship though. Take a step back and let him brood. Coaxing him to explain what’s wrong will only make him retreat further back into his shell.

If you are getting the silent treatment from your Aquarius man after a fight, know that it’s their way of venting out and coming to terms with whatever happened.

They need time to cool off and will push you away until they figure out what they want to do next. Allow them the space they need.

Wanting to be too close when he’s being cold and aloof will not end well for you both. Letting your silent partner remain that way for a while will also give you time to think about the issue at hand.

Thus, when your Aquarius man is ready to talk, you will be able work your way around the roadblock in your relationship more successfully.

It’s a universal fact that Aquarius man expressing feelings is as rare as seeing a unicorn a fly across the sky.

They are not very skilled at giving their feelings a form through their words. If you are still in the initial stages of building your relationship, they may give you the silent treatment to gauge how viable your bond is.

If you find yourself in this situation, you need to do your best to keep him hooked.

Their quietness is a tactic to pick up on your vibes, your thoughts, and your body language. They want to observe rather than be observed.

Aquarius men love mental simulation (which is the primary reason why they play mind games), so it’s essential that you play along and keep having fun.

Don’t become too clingy because it can frustrate him, and you will end up fighting with Aquarius man when all you wanted was to strengthen your bond.

Rather, try to stay connected with them in subtle ways.

They are intellectual people who like to be challenged. Thus, challenge them to a game of chess or buy a complex puzzle and ask them to solve it together.

This will help you enjoy each other’s company without requiring them to come out of their quiet zone. When you spark his interest, he will automatically open up to you.

It might take some time and consistent efforts on your part. But rest assured that you will get there as long as can manage to get him excited in your own unique way.

An Aquarius man is also interested in deep and personal conversations. So, another way to break the silent treatment is to talk about their beliefs and ideology, discuss your own achievements and failures, and so on.

Watch His Words vs His Actions

Aquarius are unusual, unconventional, and above all, unpredictable. So, when an Aquarius man goes silent towards their partner, a smart woman would keep a keen eye on what he does vs. what he says.

Pay attention to what he is doing when he is not talking or spending time with you.

If he’s chatting with strangers on social media or is spending a lot of time hanging out with friends lately, it might be a sign that’s he contemplating breaking up with you.

If you leave him be, he will naturally fade out of your live. But if you don’t want to lose him, show him that you are still interested.

Generally, what makes an Aquarius man come back is a heartfelt apology and acceptance for what you did wrong. Prove to him your willingness to correct the mistakes you made, and he will automatically come back.

However, if your Aquarius man behaves normally with you but is just being unusually quiet, there’s no need to worry. He is most probably preoccupied with his thoughts.

Aquarius tend to be workaholics as they are extremely focused on securing their financial future. So, if your partner is seemingly cold towards you, it might not have anything to do with you at all.

He may be thinking about some important work-related project that’s coming up. Or perhaps he’s busy looking for ways to earn extra money.

So, instead of racking your brain why Aquarius goes quiet, just focus on his daily activities and how he interacts with everyone else.

You will be able to understand the reason behind his otherwise unexplained silence and thus, you can determine the best course of action from thereon.

Give the Silent Treatment

When Aquarius man is angry and unforgiving and not listening to you despite the number of times you have said you are sorry, pull yourself together and ignore him back.

People with this zodiac sign always run in the opposite direction if they see someone who’s an emotional mess. Since begging for forgiveness won’t do you good anyway, you might as well give them a taste of their own medicine.

In fact, ignoring an Aquarius man back is one of the most effective ways to end the cold war that they have a tendency to wage time and again.

Therefore, when an Aquarius man ignores your text, don’t go on sending ten more in hopes that might reply. Resist the urge to call or stalk them on social media sites.

In fact, if he hasn’t blocked you yet, take the initiative yourself.

This will make him curious about what’s going on and encourage him to break the silence.

Acting cold and distant towards the love of your life might prove to be harder than it sounds. But if you wish to be with them forever, you need to know when and where to draw the line.

Responding to their silent treatment by giving them a slice of their quiet pie will prevent this from becoming a recurring issue in your relationship.

Give Him an Ultimatum

When an Aquarius man ignores you for too long, it might be high time to do something serious about it.

Is there no apparent reason why your partner might be upset? Are they simply using their renowned Aquarian man silent treatment as a pretense to not give you the time and attention you deserve?

If that’s the case, tell him straight up front to knock it off or call it quits on the relationship.

It’s a drastic step and definitely not the most attractive option for dealing with and upset Aquarius man. But you need to set boundaries.

People with this Zodiac sign are masters of their own destiny and you can rarely – if ever – make them do something that they don’t want to.

So, if your Aquarian man has withdrawn for reasons that are beyond your understanding, is being cold towards you and spending more and more time with others instead, there’s a high probability that he might be done with you anyway.

Carefully analyze your situation and decide whether you want to wait for him to come back to his usual self or if he will continue using the silent treatment to manipulate you for a long time.

Many a times, the water bearer plays such mind games just to get a reaction out of their loved ones, which is why you ought to be ready to play along.

Giving him an ultimatum to straighten out stone-cold silence will also show him that you are woman of your own mind. This is one of the main traits that Aquarius men want in their significant other.

They respect a determined and independent woman who isn’t hesitant to speak her mind and even get her way forcefully if required.