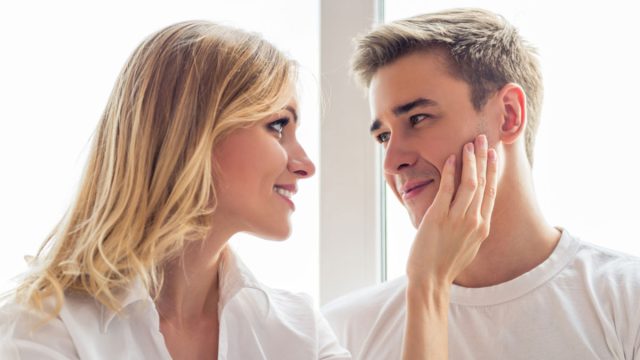 Aquarius man Scorpio woman compatibility seems questionable because both of them have untamable natures.

The Aquarius man is independent, intelligent, and opinionated. The Scorpio woman is beautiful, smart, and invincible. Not to forget, both of them are careful in love.

While the development of any relationship between the Aquarius man and Scorpio woman seems difficult, they can make it work.

Despite the fact that both the signs have many contrasting personality traits, they can make one of the best couples among all zodiac signs, if they learn to work around their differences and focus on the characteristics they share.

Both Aquarians and Scorpions are intelligent and have an adventurous streak. Both of them abhor routine lives and look for new ventures. Effective communication can keep things flowing smoothly between them.

While the Aquarius man and Scorpio woman have quite different personalities, there are a few common traits that can become the basis of their friendship.

An Aquarius man is known for his friendly nature. He is outgoing and loves to spend time with his friends. But, at the same time, he is very careful about who he allows to come close to him.

He is a person who has many friends, but hardly anyone really knows him. The Aquarius man only opens up to the woman he truly loves.

The Scorpio woman, on the other hand, also has a friendly nature and people love her for that. In fact, she is almost always one of the most popular people at her college, workplace, or in the social circle.

It seems that everyone knows her and admires her personality.

While a Scorpio woman is very friendly, she decides who she allows to come close to her. She has her guard on all the time and no one can approach her until she allows.

When the two strongly guarded personalities come across, it is unlikely that they will start interacting immediately.

They may take some time to reach for the other, but being social in nature, they cannot avoid talking to the new person they have met.

Once they start to talk, the Aquarius man and the Scorpio woman will find out that they both have some similar interests, like the same concept of adventure.

Since their idea of adventure is strange and atypical, it is hard for them to find someone with the same concept.

In addition to this, both Scorpio and Aquarius enjoy interesting conversations and are intelligent beings. Hence, they are likely to develop an intellectual connection quickly.

When an Aquarius man and a Scorpio woman meet, there is a high possibility that these few common factors overpower other personality characteristics and become the basis of a long-term Aquarius and Scorpio friendship.

Although there may be a few issues in the beginning of Scorpio Aquarius friendship, both of them are mature individuals and will soon realize that their friendship is far more important than the differences.

An Aquarius and a Scorpio will not give up on each other even though they may find a few of each other’s habits and traits annoying.

A Scorpio woman is the perfect combination of beauty, brains, and mystery – no wonder why she has a lot of admirers from the opposite gender.

Men get enchanted by her physical beauty and want to come close. But she is very cautious and does not allow everyone to come close. This makes men further intrigued by her.

However, in order to win her heart, an Aquarius man first has to earn her trust.

She wants to be sure about the man’s sincerity before getting emotionally involved. But, once she is certain that the person is not playing games with her, she will devote herself to the relationship.

When in love, a Scorpio woman is highly supportive and affectionate. But, at the same time, she is known to be possessive about her man and can get jealous if not given enough time and attention.

The Aquarius man, on the other hand, is attractive in his own unique ways. He is a rebel who does not want to change himself for anyone else.

This, when coupled with his intelligence and quirkiness, make an Aquarius man highly attractive for many women.

When an Aquarius man and Scorpio woman meet, the two individually strong and attractive personalities are likely to get drawn to each other. So, you can expect to see them develop a romantic connection.

However, they will soon realize that they have much more differences than similarities and the relationship is not going to lead them anywhere.

Issues can arise on simple things, like the ever changing moods of the Scorpio woman and the Aquarius man’s desire to be with people all the time.

One of the most common reasons for Aquarius Scorpio breakup is that Scorpio woman demands commitment and expects her partner to fulfill all her needs.

The Aquarius man, on the other hand, runs away from commitment and hates being forced to do something. The demands of the Scorpio woman would make him walk away from the relationship.

Unlike other women, a Scorpio will not tolerate cheating or betrayal from her partner. Sooner or later, she will use her famous sting to take the revenge.

For an Aquarius guy, who likes to explore all his options, this is a warning sign that he has to be cautious and not flirt with a Scorpio woman.

While the Aquarius man and Scorpio woman compatibility isn’t that great at the earlier stages of romantic relationships, it increases as they develop feelings for each other and decide to get married.

An Aquarius man and a Scorpio woman can have a successful marriage because both of them are loyal and stand by their decisions.

Once they commit, both Aquarius and Scorpio stay faithful to their partners – cheating or running away are the words that do not exist in their dictionary.

When they enter into wedlock, they will try their best to develop a relationship that is transparent; without any secrets, inner games, or lies.

They know that a successful relationship demands giving your all and they stay true to their partners. As a result, the Aquarius and Scorpio have a happy, successful, and lasting marriage.

After they get married, the Aquarius man and the Scorpio woman also influence each other’s personalities.

The Aquarius man helps to remove the famous sting out of her Scorpion woman whereas she tries her best to provide the kind of atmosphere he wants.

Another characteristic of both Aquarius man and the Scorpio woman that will help them have a successful marriage is that they both prefer honesty over everything else.

Due to the fact that they both detest routine life and continuously want excitement, adventures and novelties in their lives, they can develop similar hobbies, after spending some time together.

The problems in the Aquarius Scorpio marriage can arise because of the possessiveness of the Scorpio woman and the flirtatious nature of the Aquarius man.

The Aquarius man hates to be told by someone what he should do and does not want to give up his freedom for anyone.

In order to avoid conflicts in the marriage, the Scorpio woman needs to calm down and should not try to control her Aquarius partner.

She needs to understand that he may be flirtatious and have lots of girl friends, he is not a cheater. Once he commits to a woman, he will not betray her.

Similarly, the Aquarius man should also understand that her Scorpio wife does not like to share him with anyone.

He needs to be careful of his actions as well as understand that giving in to the demands of his wife doesn’t mean he will lose his freedom.

Scorpio and Aquarius sexually are highly compatible. Even if any issue arises, they can find a way to work around it, just like they do in other areas of their relationship.

Since they both trust each other and are assured of their partner’s loyalty, they enjoy their intimate moments without any fear or suspicion.

No matter how different they are or how incompatible they may seem, the fact is that they both love and enjoy each other’s company.

The Aquarius man loves the attention given by his Scorpio partner; he hardly accepts or expresses it though. Similarly, the Scorpio woman admires her partner’s persona.

Due to the mutual feelings, both these partners develop a deep understanding and acceptance for each other’s distinctive personalities and unique needs.

Both Aquarius and Scorpio are loyal, generous, affectionate, and love intensely. The fact that both the partners are open to experiment increases the compatibility of Scorpio and Aquarius in bed.

For both Aquarius and Scorpio, the intimate moments are the opportunities to get to explore and get to know each other better.

Since they are highly attracted to each other, they enjoy their time together. However, there can be some issues if the Scorpio woman tries to hold or set boundaries for the free Aquarius guy.

Depending on how flexible both the partners are, their private life can either be like a wonderland or a battle zone.

Since Scorpio women are intelligent and are often considered the most seductive of all women, they offer the perfect combination of beauty with brains – exactly what the Aquarius man wants – and can provide the stimulation the Aquarius men look for.

The unyielding passion of the Scorpio woman will keep things interesting between them.

Since the Aquarius man can quickly get bored, which then makes him start distancing himself, the enthusiastic nature of the Scorpion woman will ensure that this does not happen in their relationship.

Together, the Aquarius man and the Scorpio woman can have a great time in this arena.

Aquarius man Scorpio woman experiences in this area can also help further strengthen their bond as well as help keeping the love alive in long-term relationships.