5 Important Signs an Aquarius Man is Not Interested in You 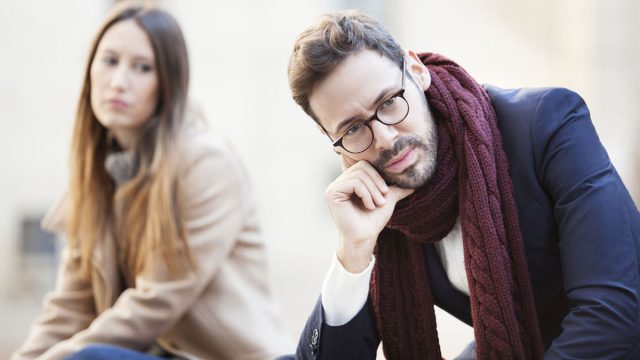 Is that Aquarius man not interested in you or is he just ignoring you to play a game of cat and mouse?

Do you feel like you two are compatible with each other? How can you know what’s the reality?

Well, an Aquarius man is particularly reserved and that makes it pretty hard to straight up determine whether or not he’s interested.

Instead of wondering if the Aquarius man’s testing you, it is better to try and understand whether or not he’s actually interested in you. You might have to come to terms with the fact that he just doesn’t like you.

Here are the 5 most important signs an Aquarius man is not into you. This will help you know whether or not to keep trying or move on.

1. Has He Invited You Into His Personal Life?

Aquarius men are incredibly private individuals who do not make everybody privy to the information about their personal lives very easily. This works with them for all of their relationships and that includes their friends, family and significant others too.

To the people that an Aquarius man is really close to and invited to his personal life, he has a very exclusive inner circle. Just think about it. Has he made an effort to invite you into his inner circle?

A sign of an Aquarius man in love is that he will share all his private thoughts, his dreams and all his hopes with you. An Aquarius man is inventive and attracted to an ideal image of the whole world.

If he is actually interested in you, he will not only tell you about what his vision for the future is but also make sure that he shares the fact that he wants you to be a part of it.

If he is actually capable of falling in love with you, he’ll start letting you in on all his secrets. You’ll get invitations to his house and give you a peek into his private life and what he’s interested in.

The easiest way to tell how an Aquarius man acts when he likes you is that he will want you to be part of every detail of his personal life. He will be excited to share his deepest thoughts.

One of the most important signs an Aquarius man is not into you is that he will not make any effort to try and make you part of his private life. An Aquarius man not interested will completely ignore you.

2. Does He Ever Flirt With You?

One of the ways how an Aquarius man acts when he likes you is that he will be playful about it. Once he works up the courage to do it, he will start to flirt with you now and then.

It is only when an Aquarius man is crushing on someone will you see him become slightly unsure of himself and get awkward. Cut him some slack if he’s not very good at flirting because he’s not used to it.

The easiest method of how to read an Aquarius man who’s crushing on you is to see how they react when they’re around you. Make it a point to note their behavior and how it changes whenever you are around.

They are not the most generic people when it comes to the matter their flirting techniques. You should look for signs of them trying to impress you with their humor or through other things that can be counted as flirting.

On the flip side, if you see absolutely no attempts from an Aquarius man to make even a knock-knock joke when he is around you, it is not the best sign. He might not be interested in you after all.

While this is a bit of a generalization but when it comes to Aquarius men, there is a common trend of a deep interest in film and their love for the artistry in this media. Aquarius men just love movies.

An avid film goer, an Aquarius man is pretty reserved about whom he will invite to go watch a movie with. If he ever decides to invite you for a film for a night out, it’s a sign he’s interested.

It’s not just any blockbuster movie they’re interested in. They like films that make you think and they love to analyze the craft because it stimulates their brains to a level. They want more than just simplistic entertainment from films.

You have to understand that it is a pretty big deal if they invite you to a film. If the Aquarius man isn’t into films, you should look for other hobbies they’re invested quite deeply in. There is always something.

If they invite you to be a part of their cool hobby, they’re not just interested. It’s also a sign of an Aquarius man testing you. They want to see if they can have long and interesting dialogues with you.

If you are wondering what type of women Aquarius men like, it is someone they can freely share their deepest interests with and talk to for hours on end because of that. They won’t invite you otherwise.

When an Aquarius man likes you, he will come out of his shell to meet you and share with you who he truly is by including you in activities he is most passionate about. If he doesn’t, try moving on.

4. Is He Trying to Explore Weird and Off Beat Things with You?

An Aquarius man’s commitment to staying true to his extraterrestrial personality proves that they are anything but ordinary. Has the Aquarius man ever tried to include you in any fascinating and odd activity that just seems “out there”?

You see, with a strange personality, they know how to keep things interesting in their lives. One way how an Aquarius man acts when he likes you is that he will be weird in front of you no matter what.

He will invite you on his excursions into the strange. Expect trips to a lot of road side attractions, haunted houses and speakeasies. An Aquarius man will know the most unconventional places to visit and hang out.

An obvious sign that he is actually attracted to you is that he will invite you to go along with him to these expeditions and share experience with him. Think of mind-bending adventures and excitement you’ve never experienced before.

If you’re not getting his attention and you keep on wondering why the Aquarius man ignores you, it’s not because he’s playing games. Ignoring an Aquarius man back won’t make a difference. He just might not be interested in you.

5. Does he Try to Engage You in Intellectual Conversations?

One of the biggest signs an Aquarius man is interested is that he will try to engage in intellectual conversations with you. An Aquarius man will always look for intellectual stimulus from the people that he is actually attracted to.

If you are able to pass their test and actually make it seem like you are intellectually sound enough to come to his level, it will garner his interest in you. Have the topics you want to talk about ready.

Wen talking to an Aquarius man, you will always find yourself on your toes because of the pace with which he is able to talk about his visions for the future he sees. Never be afraid to speak your mind.

One of the signs an Aquarius man doesn’t like you is that he won’t talk to you for long. If he likes you, both you and the Aquarius man will find it hard to put an end to your conversations.

If that is indeed the case, it is not a matter of games and playfulness. It is a simple matter of fact that he is just not that into you and you would do better to move on in life.

An Aquarius man has an irresistible personality, which makes it quite a challenge to truly understand whether he likes you or not. Understanding the signs he is not interested will keep you from wasting his time as well as yours.