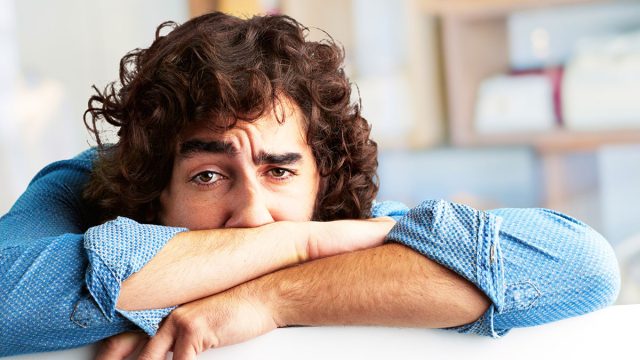 Aquarius man negative traits are among the most infuriating aspects of this intimidating zodiac sign.

But to reach his heart, you’ll have to weave through the exhausting parts of his personality before you get to the good stuff.

Even though people often misunderstand him because of his complexity, you can get Aquarius male negative traits down to a science.

However, learning to appreciate this side of him is no easy feat.

Fair warning, don’t expect a soft, sweet center once you’ve worked through his many layers.

Fortunately, even the darkest negative traits of Aquarius man are by no means evil.

But there is a lot to learn about the good, the bad, and the ugly characteristics that the witty Aquarian couldn’t hide even if he tried.

A true individualist, the Aquarius man needs to feel liberated from social norms from time to time. Having restrictions and rules isn’t his forte. He may even be inclined to fight for his rights and those of others.

Freedom for an Aquarius male means he can fully express himself without holding back. If at any point within his home, work, or creative space he has to walk on eggshells, he’ll completely shut down.

Often seen as flighty, the freedom-loving Aquarian is bound to skip town or travel abroad on a moment’s notice if only to demonstrate to himself that he is truly free.

Relationships, binding contracts, and even simple agreements can feel suffocating to the Aquarius man. He much prefers to “go with the flow” or even “wing it” in most cases.

His progressive attitude takes him far, but it’s his total disdain for anything traditional that leaves a bad taste.

A pensive look may have you thinking they’ve had a rough day that they refuse to talk about with you. But, in actuality, they’re likely having a minor existential crisis that involves leaving their day job and starting a social movement.

Don’t take the cold demeanor personally. Aquarius men typically feel misunderstood, thus are more comfortable leaving you confused about their mood than try to connect and explain themselves.

3. His Way or the Highway

Of all Aquarius men’s bad traits, this may be the most exhausting.

Because he believes he’s got the best idea in the room, he will often insist things get done his way. But if you choose not to follow his lead, he’ll gladly continue on his own. This trait makes Aquarian men terrible teammates but potentially influential leaders.

The stubbornness doesn’t bode well in social settings, and still, people can’t seem to get enough of this relentless creature. As insufferable as it feels to agree with an Aquarius man, he’s usually right. That may be the worst part of all.

If he does decide to follow another, it’s more often than not another Aquarius who outsmarts him. And there are few things scarier than a humbled Aquarius man.

Marching to the beat of his own drum is the very essence of an Aquarius man. Unlikely to ask for help, he’s usually knee-deep in ten different projects, all of which he’ll attempt to do alone.

Ringing true to the belief that his way is unique (and perhaps superior) is why he likes to roll solo. If he allows you to come to his aid, you can expect tons of criticism and corrections.

No doubt he will get the job done. But things won’t always come to him as easy as they could if he’d take some help.

The ultimate non-conformist, you’ll never be able to squeeze an Aquarius man into a mold. Labels, structure, and limitations are a no-go with this rebellious zodiac sign.

A true testament to his need for freedom, an Aquarius male sign traits will lead him to rise against the machine and display total anarchy for his beliefs.

If you ever want anything from an Aquarius, ask him for the opposite. Then, watch as his rebellious and mulish nature take care of the rest.

While he could change the world, the Aquarius man and his rebellious traits usually land him in meaningless arguments. He’ll always be that one in the group that disagrees with the consensus.

Sometimes it’s hard to tell if he’s a rebel with a cause or goes against the grain just for the sake of it.

If he’s not scheming to dismantle the patriarchy or dwell on the latest conspiracy, there is always something fantastical occupying the mind of an Aquarius man.

While this may seem charming, it becomes alarming when he thoroughly checks out mentally. It’s like he’s there but not there.

His thoughts are of the highest priority, so it can make it hard to connect with or relate to this avid daydreamer.

In a relationship, this overthinking habit can be incredibly tiresome as what might start as a minor argument can snowball into more profound, more unnecessary concerns on the part of the Aquarius man.

Seemingly cold and condescending, this complex zodiac sign is usually detached or disinterested. As a result, an Aquarius man indulges in his ideas and fantasies as you talk endlessly about your interests.

With such an active mind and vivid imagination, it is not uncommon for an Aquarius man to allow his mind to wander when not actively stimulated.

Nothing anyone else has to say will be as appealing to an Aquarius man as his own ideas.

So think twice about pouring your heart out about something you’re passionate about with this zodiac sign. Your Aquarius man will reply to you with just a nod and smug smile if you’re lucky.

If he wants it to be less noticeable, he’ll switch the topic as soon as possible to one of interest to him. Aquarius male personality traits lean toward self-centeredness.

The most obvious way an Aquarius man will express disinterest is by not being around.

On the other hand, if he’s willing to entertain your conversations about yoga class and business meetings, he possibly likes you, but perhaps not the conversation.

Everyone thinks a Capricorn is cheeky. But, then, you meet an Aquarius man who will make his opinion known and put you in your place at the same time.

You won’t be able to tell if he’s assertive or offensive, but the attitude of an Aquarius is always apparent. Their Aquarius nature will make them oblivious to how they come across.

An Aquarius man showing attitude is usually a sign that he’s passionate about something. His otherwise deadpan, monotone energy might peak just sufficiently to show some sass.

If you ever challenge any of his Aquarius sign characteristics, you’ll see his attitude in full display. He never backs down, especially if he’s defending himself or something he believes in.

The perfectionism of a Virgo or Scorpio inspires action and creation. For the Aquarius man, however, his perfectionism is unattainable.

Setting lofty goals is usually a setup to reaffirm his belief that the world conspires against him.
Nonetheless, he will aspire to be the absolute best in all that he does.

If at any point a goal or relationship isn’t meeting his high standard ideals, he’ll leave it altogether.

Secretly, he always blames himself if everything isn’t “just right.” However, once he walks away from something or someone, there’s usually no turning back.

As gloomy as he may seem, he craves someone who will take the time to get him.

A natural skeptic, an Aquarius man doesn’t see the cup half empty. He doubts that the cup exists. A disbeliever in happy endings, he knows whatever can go wrong will go wrong.

On the flip side, his pessimistic nature prepares him for when the worst occurs. There is always a plan B, C, and D. Thus, where there is Aquarian pessimism, Aquarian preparedness follows.

And if things turn out according to his pessimistic prediction, you can guarantee he’ll be quick to say: “I told you so,” without hesitation.

What you see is what you get. Therefore, any attempt to change the Aquarius man’s negative traits is a lost cause. And honestly, you wouldn’t want to fix what ain’t broke.

Having no filter renders the Aquarius man undeniably honest and straightforward. They’ll be no guessing where they stand as he’ll always make his position known.

What may come across as ruthless and cold is just an efficient form of communication for an Aquarius man. Exerting more energy for emotion’s sake is not part of any Aquarius traits astrology teaches us.

If you get the opportunity to hear an Aquarius man speak his mind without a filter, relish in the fact that he chose you as his confidant. Most others will be met with silence and scoffs.

Ruled by Uranus, the Aquarius man can be pretty eccentric when he’s in his element. If that’s the case, be prepared to go down the rabbit hole as he bends your mind with ideas and theories.