5 Tips for When an Aquarius Man is Ignoring You 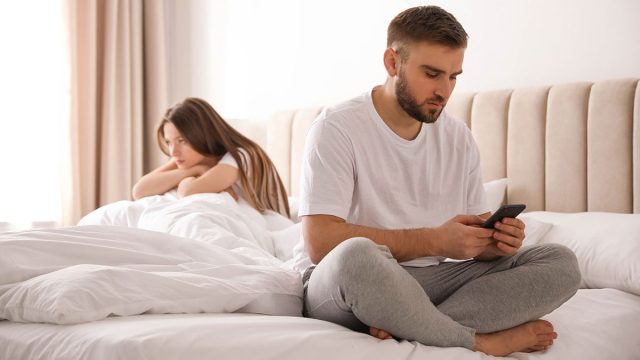 Is your Aquarius man ignoring you suddenly out of nowhere? While there may be many reasons behind it, your response should be the same.

When an Aquarius man ignores your texts, you need to make sure that you tread lightly.

The worst thing about the Aquarius man silent treatment can be to tackle the issue. It can be hard to deduce why he has gone quiet all of a sudden, since they tend to do it without giving any explanation.

Sometimes, the answer can simply be that he is busy, but if you start texting and calling frequently, he may back off completely.

Rather than telling you he needs space, he will probably just take it without informing. Here are 5 things to follow when he starts to ignore you.

This may sound like a challenge in itself, especially when you don’t know why you are being ignored. However, ignoring the Aquarius man is the best call. You have to relax and let it go as much as you can.

The main thing you have to remember is that you cannot control his thoughts or actions at all. An Aquarius man distancing himself is something you don’t have much control over.

He is someone who doesn’t like being dictated since Aquarius men are often really strong individuals who value their independence. Therefore, if you genuinely care about your guy, the best thing to do is give him the space he needs.

You have to be patient instead of trying different tactics or mind games to get him back. If you want to know how to play mind games with an Aquarius male, the answer is that there is simply no way.

You cannot make an Aquarius man do something that he doesn’t want to do or get him to feel what you want him to.

One thing you have to remember is that if he wants to be around you, he has to make that choice himself. Ignoring an Aquarius man back can seem hard, but this is what you need to do to.

Manipulation doesn’t really work with Aquarius men. Similar to Virgo men, they have a keen sense and know when people are being sincere or not.

If you continue to wonder how to get an Aquarius man to miss you or try manipulating him in any way, he will simply leave the relationship to take the space he craves for.

The thing about Aquarius men is that they want partners who have the patience to let relationships and bonds grow through a natural course. They detest clingy and pushy partners.

If you try to rush him, you will just end up pushing him away. If the Aquarius man is suddenly distant, trying to rush him will make him want to take more space.

Let him be; his aloofness doesn’t mean that he will be gone forever and breakup with you. When you begin to panic over some unanswered messages, you will just end up making yourself upset.

If an Aquarius man ignores you does that mean he is testing you? Well, he may want to see if you actually have the patience to be with him and are willing to give him space when he wants it.

If he is indeed testing you, you should be patient to show him that you can handle it.

If you want to know how to handle a distant Aquarius man, the first thing you need to know is to never push him.

Aquarius men tend to detach often enough from people and therefore, it doesn’t really faze them if they leave you alone for some time.

You will not be able to change his mind on what he wants, so it may be best to simply just ignore him. What makes an Aquarius man come back and get his attention, is patience and a calm attitude.

If you don’t obsess over your phone too much or contact him over and over again, you will be using the best strategy.

The thing about Aquarius men is that they will let you know if they want to spend time with you or talk to you. And, if he wants some space or time to himself, you should let him have it.

He was probably attracted to you because you were an independent woman, so you should try and be that in the first place. Don’t try to change yourself.

You can be busy with your work, gym, study, or social circle instead of worrying about whether he will return your text or calls. It’s not his responsibility to make you happy since only you can do that.

Putting such pressure on him will only drive him away since he prefers his own and his partner’s independence. Enjoy your freedom and let him enjoy his!

Why your Aquarius man might lie to you? Make sure he is always honest about his feelings for you.

When an Aquarius man is ignoring you, it can become quite devastating and frustrating, but you should go ahead and live your life to the fullest. Take this time to spend time with your family or friends and have fun.

You can put your phone away if lack of communication with him bothers you. If you continue to stress over whether he will reach out to you, it will not help you get the results you desire.

What happens if you ignore an Aquarius man? It will show him that you aren’t needy, clingy, or dependent on him. Remember, Aquarius men tend to fall for women who like to do their own thing and are extremely strong.

It will actually get him more interested that you aren’t worried about where he is, if you are busy, you aren’t wondering why he hasn’t reached out, or what he is up to.

The less you push after him, the more intriguing it will be for him. If the Aquarius man pulls away when in love, just ignore him.

Try sending him a quick text just saying something like, “I am busy these days but wanted to just say hi and hope that you’re doing well.” Don’t add anything else or even re-text him.

Once you do so, it is sure to build up his curiosity and he will definitely wonder what you are up to. He may respond at the moment or text later when he wants to.

However, if he still doesn’t reply the way you would like him to, what is the worst that could happen? If he decides not to text you back, you shouldn’t keep pining any way.

He disappeared without giving a reason and is suddenly ignoring you, so why should you waste any more emotions and time. However, this doesn’t mean that you should completely give up on him.

It can sometimes be more important to focus on your own happiness. You can’t teach him or change him, so just shrug your shoulders and be happy with going about your day.

If the Aquarius man is testing you to see if you will be patient, you will pass. If not, then your life will continue going on without him.

5. Watch His Words and Actions

If you want to know how to get an Aquarius man to stop ignoring you, you have to act as though it doesn’t really bother you in any way.

Don’t text him again or call him for a while. Keep your distance from him as much as you can. The biggest mistake you can make is to not watch out for his actions and words.

He isn’t texting because he wants space or is busy. If you ignore these cues and bombard him, it will only make him feel annoyed or pressured.

At the end of the day, it will make him think you are clingy which can make him lose interest altogether.

When an Aquarius man is ignoring you, the best thing can be to let him cool off and let him gather his thoughts. If you want to know how to make an Aquarius man miss you, just let him be.

Your missing presence from his WhatsApp or social media will just make him miss you more. His actions and words (or lack of thereof) show that he needs some space, so make yourself unavailable to him.

You need to realize that it isn’t nice that he is ignoring you and not texting back, so why make yourself upset over it?

If you continue to try so hard and run after him, he will end up having the upper hand by trying to blow you off. The best statement you can make is by not using any words at all.

If he isn’t texting, calling, asking you on dates, or interacting, then you need to put the brakes on too. If he cannot see that you are important too, you shouldn’t be hung up on him either.

The best thing you can do when the Aquarius man is ignoring you is to work on yourself and be happy with your own company.

Are Aquarius Men Dominant in a Relationship?How can I Surprise my Aquarius Man?
Hello, I'm Liz