How Does an Aquarius Man Flirt? 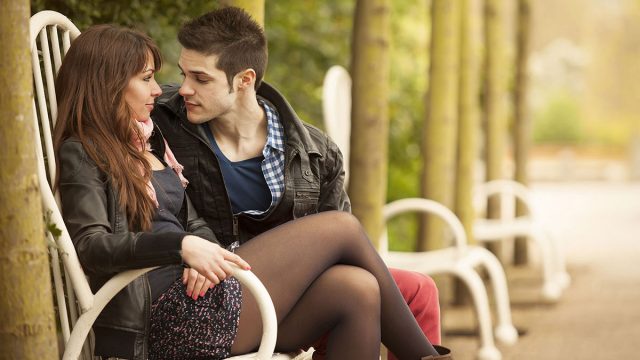 For Aquarius men, flirting is all about grabbing someone’s attention with as much unpredictability as possible.

When it comes to flirting and romance, understanding an Aquarius man can be difficult. Aquarians aren’t known to be naturally flirtatious.

As Aquarius men possess one of the quirkiest zodiac signs, understanding how an Aquarius man shows love can seem like a challenge. Get ready to know if the Aquarius man you have your eye on feels the same for you!

By Being Particularly Attentive

When an Aquarius man has a crush on you, he is sure to give you all the attention he can. He will start sending you text messages, calling you or even spending face time with you!

In order to better understand the man you have feelings for, you need to know that when an Aquarius man wants to be friends or something more than that, his ways are a little more complicated than other zodiac signs.

An Aquarius man expressing love is more than just romantic movie nights and fancy dinners. He wants to really know the person he likes, especially on an intellectual level.

Aquarius men tend to ask extremely personal questions such as the goals and dreams of a person. They want that connection and chemistry to be there before committing to an actual relationship.

While one of his flirting techniques will be to try to be around you for a longer time and know as much as he can, you need to remember that he loves mysteries.

Never give out any intimate details about yourself on the first date with an Aquarius. He will mine for information; however, you need to make sure not to give away too much.

If you are wondering how to make an Aquarius man to chase you, the answer is simple – get him intrigued. While he is paying extra attention to you, make it worth his while.

Aquarius men are known to find intimate relationships challenging where the other person forces them to express their emotions. Therefore, you might not get much response from an Aquarius man in public places.

However, in private, Aquarius men are known to show affection as well as a lot of passion. If he really likes you, he will show you places where he feels protected and safe.

Furthermore, he will try to initiate physical contact. When you start noticing your Aquarius crush prolonging hugs and holding your hands, understand that he has got it bad for you.

A shy Aquarius man tends to be reserved with his emotions, especially in public settings. Aquarius men adore privacy. Overtly public displays of love and emotion make them uncomfortable.

If you see an Aquarius man is willing to let go of his mystic nature for you and tries to get intimate with you, know that you are the one.

Along with physical contact, it is important to notice his body language. If he likes you, he will try to copy your physical posture and moves.

So, if you catch your Aquarius crush trying to mimic your signature dance move, know that this is a clear indicator of an Aquarius man in love.

Don’t worry if the Aquarius guy you like shies away from hugging and kissing you in public. Wait till both of you are in a comfortable setting and see the magic unwind in front of your eyes!

With Playful and Childlike Teasing

Some of the best traits of Aquarius men are their friendship, independence and playfulness. A lot of people are not aware of this that Aquarius men can be quite playful when they decide to be.

However, this only happens when they muster the courage to do so. So, if an Aquarius man is really interested in you, he will certainly find the courage to woo you!

While he may be a little awkward at first, he will be sure to throw in some playful and childlike teasing, and cute, romantic pickup lines your way!

When you see an Aquarius man making the moves, understand that it wasn’t easy for him to do so and he must really be fond of you.

Aquarius men tend to become playful with women they find extremely attractive. While they might take a long time to commit, they will play as long as they can.

Sometimes an Aquarius man might be only looking for a relationship with no strings attached. However, he isn’t known for his ability to make thing perfectly clear.

Therefore, it might be best to understand what the guy you like really wants from you, before you start falling for his playful nature!

Remember that when an Aquarius man is in love, he will make sure that he shows clear signs of his loyalty and commitment to his partner.

One unconscious sign of attraction that Aquarius men tend to show is mirroring i.e. matching the movements and actions of the person they really like.

Aquarius men mirror the interests and body language of the person they like. They will copy your favorite catchphrases and your favorite expression.

Imitation and mimicry might be the best form of flattery. When Aquarius men find someone important or extremely attractive, they mimic their gestures and try to imitate their cute signature moves that entice them.

Mimicry is known to indicate attraction. One of the clearest signs an Aquarius man is falling for you is his body language. Notice if he is mirroring the way you stand or cross your legs.

If you do catch him doing so, know that the physical attraction between the two of you could be quite real. You can even conduct a little test to confirm your confusions.

Observe if he tries to copy your dance moves or the way you talk to someone else. This means that the guy you like is really trying to get in sync with you on a subconscious level.

Aquarius men tend to make a lot of subconscious movements around the women they like. They mimic their body language and try to close the gap in between in the most subtle manner.

Aquarius men are known for their love of adventurous lifestyle, same goes for their ways of flirting! They tend to be dynamic and execute bold moves.

They are extravagant and aren’t scared of asking intense and bold question to know someone better. For this particular reason, they are attracted to women who aren’t afraid to make the first move.

Aquarius men respond well to strong cues. So, if you are interested, don’t be afraid to show it. Give him the first signal that he desires, and he will bring his best game to the table!

If he knows that you are into him, he will continue to pursue you. Aquarius men like to be in the presence of people they are attracted to.

If he is really crushing on you, he will keep his eye on you at a party. However, he won’t put his eyes directly out there. Aquarius men are masters at hiding feelings.

Along with their bold, flirtatious moves, you need to keep an eye for all the mystery they tend to put out there.

Remember that he loves meaningful gestures. He might try to grab your attention by inviting you to take a yoga class with him or even attend a wedding as his date.

Aquarius men love to play the hot and cold game, interested one minute and cold the next to gauge the other person’s level of interest.

An Aquarius man and eye contact games also go side by side. He loves to not say anything and observe the person he likes. He won’t let you know exactly what he is looking for.

Aquarius men can be very coy indeed. If an Aquarius man is really serious about you, he may open up to you and share his intelligence, showing that he actually wants to build a relationship with you.

His hard-to-get behavior isn’t his negative aspect. Instead he wants his crush to actually show him that they are worthy of his love.

An Aquarius man is a social creature. He gravitates towards individuals who possess the ability to stimulate his mind. For him, flirting and romance is all about a mental connection.

Aquarius men love to speak boldly of their opinions. At the same time, they like to act aloof and want their partners to really work for it.

His interests are complex and varied. Thus, he won’t start showing interest in just anyone. He will only try to connect with people who appreciate his ways.

Aquarius men are not ones to show affection in public. So, don’t be discouraged as this is just how they bond with the people they like!

You might need to take the initial step and invite the guy you have your eye on for some alone time. Once you have him alone, he is sure to show you his romantic side that you desire to witness!

What Happens When an Aquarius Man Gets Mad?How do Aquarius Men Play Hard to Get?
Hello, I'm Liz