What to Do When Your Aquarius Man is Angry? 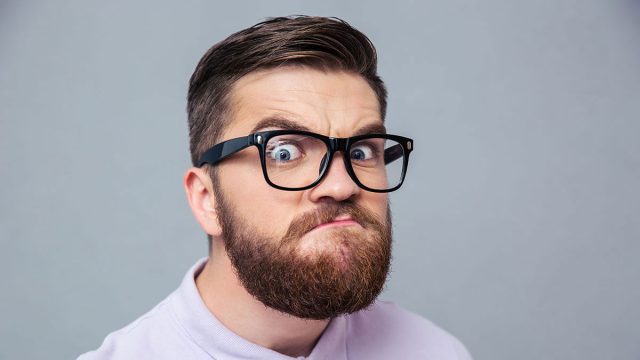 If an Aquarius is giving you the silent treatment, then you’ve probably done something to make your Aquarius man angry.

Aquarius is a fixed air sign, which means showing emotions is tough for them, making them almost impossible to read.

When an Aquarius man is angry, the silent treatment is their go-to, no reaction, reaction. Chances are they are more upset at having to explain themselves than at the actual situation. So they choose to ignore it instead.

In general, they are angered by selfish people or when they feel controlled. They won’t tell you, though, so it is a lot of guesswork at your end.

An Aquarius man after a fight is going to be a baby. When dating them, be ready to put in some sincere peacemaking effort.

An Aquarius man is not only stubborn but also quite intellectual. They can easily detect the underlying meaning behind spoken words and also identify the lack of sincerity in those words. Here, you can’t get away with a simple sorry.

When an Aquarius is upset, they expect a little more effort than just pacifying words. Before you utter an apology, take your time to assess the situation and identify what exactly bothered him.

Chances are he will ask you to explain why you feel the need to apologize. Make sure you ground yourself and give him a logical and straightforward explanation. They value honesty, so don’t try to sugar coat anything.

Make sure that when you apologize, you keep your emotions at bay. If there’s one thing that Aquarius men value, it’s clear communication without dramatic or sentimental gestures.

Words without meaning fall on deaf ears, especially if there’s no sincerity in them. If you feel like your Aquarius man is being unfair, then it’s better not to say anything than to say what you don’t mean.

Don’t simply say sorry and expect things to return to normalcy. Wait for your man to calm down before you breach the topic and try and understand the reason behind his aggravated reactions.

Aquarians are generally private people and need their space. However, when an Aquarius man ignores you, it can be a major cause for alarm. Now is the time for you to sit down and talk to him.

No matter what the problem may be, communication is the key to solving it. Aquarians are intellectual souls who bottle up their feelings from everyone. If you can get them to open up, know your apology has been accepted.

Here, it is important that you first accept your mistake before trying to point out his mistake. Getting defensive when apologizing to an Aquarius is the perfect recipe for disaster. Your man will grow moody and distant.

They absolutely love having intellectual discussions. Taking the “I am right, and you are wrong” approach may be the wrong one. It will do more harm than good.

Instead, start a conversation with why you think you feel this way and watch as they try and explain a thousand reasons that have been churning in their head.

Be open and be accepting. Show a willingness to make amends, and do not try to conform him to your rules and regulations. Keep in mind that an Aquarius man is never wrong, even when he is wrong.

An Aquarius man, upset or not, demands his respect. They value their philosophies and hold on to them like their prized possessions. Do not, at any point, try to challenge their beliefs or look down upon them.

Understand that they need their time to get over situations and bring their emotions under control. If, even after all your apologizing, they remain aloof, then let them be. They need distance to restore things to normalcy.

While you may be getting angsty on the inside, waiting for their response, you must respect their decision. Take the Aquarius man’s silent treatment with poise and grace and let them come to terms with their emotions.

Never challenge their value and belief system as that is the essence of their being. If you threaten their core beliefs, they will get up, leave, and never return.

Learn to acknowledge and respect the differences between you two, but only when he is ready. Respect his privacy and his need for space till then, and your patience will be rewarded.

Give Him His Space

An Aquarius man after a fight is going to be distant and cold. That is his way of asking for space. Give him the time he needs to recuperate from whatever it is that is troubling his mind.

Know that nothing makes an Aquarius man angry quite like people trying to cage him. If you keep insisting that he respond when he isn’t ready, his response might very well be to flee as far away as he can.

At a time like this, if you push them for a response, you may end up pushing them away. Understand that they need time to come to terms with their feelings, and you will have to be patient.

An Aquarius, when hurt, doesn’t think twice before uttering harsh words to put their opponents in place. If they are holding back, then they are trying to care for you in their own way. Let them, even if it’s difficult.

Friendships are incredibly important to an Aquarius man. When he appears to be visibly upset, trying to be his partner may do you more harm than good. Become his friend instead.

The chances are that before he asked you to go out with him, you two were very good friends. Appealing to that sense of camaraderie is the best way to approach your man when he is upset.

You need to keep your emotions aside and try and look at the situation from his perspective. Then, instead of justifying your actions, be that understanding friend who can get your man out of his shell.

If he seems unwilling to speak still, then it’s better not to push it. Tell him that you’d like to be his friend and that you are there for him if he needs to talk and then leave.

You will have to wait for him to make the next move. You’ve done all you can to get him to talk about his feelings, and there’s nothing more you can do.

This weird thing makes Aquarius men lose interest... Here's how to make them stay in love.

They take their time, but they eventually come around. Patience is the answer to how to deal with an angry Aquarius man. If you can hold your own, you can hold on to him too.

However, don’t take him for granted. Once he’s acknowledged the apology, make sure you never repeat the same mistake again. If you do, it won’t be as easy to get him to forgive you.

A repeated mistake is like a double bullet wound through an Aquarius’s heart. Your relationship may survive the first one, even the second one, but the third one will kill.

The second or third time around, the distance may be permanent, and they may even draw the line. Forgiveness won’t be on the table anymore, so be careful not to offend them again.

Here’s the ideal tip on how to reconcile with an Aquarius man. You will have to send them a gift, as their forgiveness doesn’t come easy or cheap. For them, a gift represents your sincerity.

The way we see it, an Aquarius man can remain holed up in his fort forever. The gift acts as a bait to lure him out of his shell. It may even prove fruitful in getting him to talk to you.

However, make sure the gift is thoughtful. It is your one shot at the perfect apology, so do not waste it on mindless expensive material purchases.

Know that deep down, an Aquarius man is a die-hard romantic. Instead of an expensive watch, get him something that is reminiscent of your first date. Doing will remind him of the good days.

A thoughtful gift can help alleviate the feelings of hurt and misunderstanding that are clouding his brain, so be wise and remember that.

Know that an Aquarius associates things with feelings. Use that connection to get him something precious from past experiences to get him to consider opening up and forgiving you.

A good gift will let him know that you value the little things, as does he. Once he builds that connection, he will be willing to take the next step forward to forgiveness, acknowledgment, and making amends.