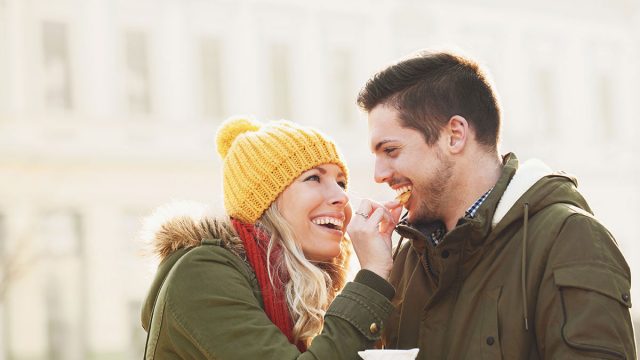 Aquarius-Aquarius compatibility is incredibly high in some areas, but that doesn’t mean they are always a perfect couple.

Two Aquarians can have a lot of fun together but may struggle with emotional intimacy and bonding. These rebellious signs can’t always manage to get along!

The relationship between two Aquarians can be hit or miss. They are similar in many ways, but that similarity sometimes makes a relationship difficult.

Two aloof, emotionally detached Aquarians may not have an easy time forming a long-lasting relationship. They might have a grand time hanging out and chatting together, but they must learn to open up if they want an intimate relationship.

However, the chaotic nature that sometimes turns others away won’t be too much for another Aquarian. These two understand one another in ways nobody else can and they can deal with the unpredictability.

An Aquarius-Aquarius friendship can be extremely fulfilling for both people. Their friendship might seem odd to onlookers, though. The way they maintain friendships doesn’t make sense to everyone else.

Aquarians tend to be highly independent. It’s a big deal when they let someone in. If two Aquarians become best friends, they have both actively decided to trust and support one another.

Two Aquarius best friends might not be together constantly. Even if they genuinely enjoy being together, they will still spend a lot of time alone. They might go a while without speaking or seeing one another, but that won’t mean they are any less close!

Other signs might get upset when Aquarius drops off the face of the earth for days or weeks at a time. Missed calls and unread messages might be seen as a sign of anger or a lack of care. Another Aquarius will understand, though.

When these two can meet, they will always have a good time together. They’ll have a great time doing shared hobbies together, but that’s not always necessary.

Two Aquarians can always have interesting conversations together too. As friends, these two will likely be able to talk to one another in ways they can’t with other people.

They will be free to chat the night away about any interesting topic or sit in silence and enjoy one another’s company. Aquarians may enjoy talking, but they don’t need to.

Sometimes, these two will do completely different things while hanging out together. One might be watching a movie while the other plays a game or works on art.

Emotional intimacy can be difficult for Aquarians, so that is one area where this friendship will struggle. Aquarians sometimes need a friend more emotionally open than them to balance them out.

That doesn’t mean this friendship isn’t still a good one, though. It might seem weird to onlookers, especially when two Aquarian friends seem to be ignoring each other while hanging out. These two can still be the best of friends, though!

Aquarius’ compatibility with any sign can be challenging at times. Rebellious Aquarius isn’t always the type to “do” relationships. It’s common for many Aquarians to stay perpetually single, have multiple short-term relationships, or refuse to settle down.

A relationship with Aquarius can be fun, but it can also be difficult. They need someone as independent as they are, or they may start to feel stifled by their partner.

However, an Aquarius man and an Aquarius woman’s compatibility can be hit or miss because of that independence. Neither will try to control the other, but neither will necessarily push to maintain the relationship.

When two Aquarians come together, they might not be attracted to one another at first. Aquarius is a sign that is attracted to its opposite in many ways. If another Aquarius is too similar, that might make things more difficult.

An emotionally detached Aquarius will find it impossible to bond with an Aquarius who is equally detached. If they are both constantly distant and aloof, they will never be able to form a strong relationship.

Two stubborn Aquarians will never be able to see eye-to-eye on the things they disagree about. Instead of trying to compromise, they will be more likely to end the relationship if they don’t think it’s worth it.

If two Aquarians are attracted to one another and want a good relationship, they can have one! They just have to be mindful of how much effort each makes to maintain the relationship.

Two Aquarians in a relationship might enjoy volunteering together, working on shared art projects, or going to parties and socializing. They will have no problem spending time apart, but they must also focus on spending time together!

The chaotic nature of an Aquarius can sometimes turn others off, but another Aquarius will completely understand.

These two won’t be upset with one another for being a little late or changing plans last minute. If one partner forgets something, the other is unlikely to become angry with them.

Overall, these two can have a good relationship. It just takes a lot of effort, and both Aquarians must be willing to make that effort.

Are Aquarius and Aquarius soulmates? They can be! Aquarius is a creative, unique sign that always keeps things interesting. When two get together, they can have a lot of fun.

Marriage is something many Aquarius-Aquarius couples struggle with, though. It’s common for Aquarians to be opposed to the idea of marriage. Two people who rebel against the concept of coming together means these two might never get married in the first place.

That doesn’t mean they can’t have a successful relationship. Whether or not they get married, Aquarians can certainly have a healthy and happy long-term relationship.

If these two want to be life partners, officially or unofficially, they must have shared values. While Aquarians can share many traits, that doesn’t necessarily mean they all have the same morals and values!

An Aquarius-Aquarius relationship will be most successful when these two can agree on important things. Aquarius might be free-spirited and tolerant in many ways, but they can become stubborn and unyielding about the things that matter most to them.

If one partner wants children and the other doesn’t, that will likely be a huge deal breaker as neither Aquarian is likely to change their mind easily about something important. They can compromise on minor things, but nothing that major.

Aquarians value freedom more than anything else, so they will never try to control their spouses. They can accept minor disagreements and will be perfectly content to do things alone when they don’t share every hobby with their spouse.

Their mutual love of freedom can make this a great marriage if these two do decide to get married. They will both be able to be independent and free-spirited, just like they were before they married. Neither will try to tie the other down.

Can two Aquarians get married? If they both want to, they can. They have to both genuinely want to be together, though. The marriage will never go anywhere if either is uncertain about the match.

Aquarius’ sexuality is all over the place. This open-minded, unpredictable sign is often down to try almost anything in the bedroom. They get easily bored and need to mix things up to remain satisfied during sex.

Aquarians need sexual partners who will experiment with them. Another Aquarius will undoubtedly be up for the task!

An Aquarius woman’s compatibility is higher with people who aren’t too domineering. Aquarius women like to be free. If they ever act submissive in the bedroom, it’s because they want to, not because someone else made them.

An Aquarius man won’t try to control an Aquarius woman. He won’t demand that “traditional roles” be followed in a relationship or the bedroom.

An Aquarius man’s compatibility in the bedroom is higher with someone who can be spontaneous. They want a partner who will always keep things exciting instead of doing the same thing each time.

An Aquarius woman can keep up with an Aquarius man! She’ll be just as active in suggesting new things to try as him and will likely be up for anything he suggests.

Emotionally intimacy in the bedroom can be difficult for two Aquarians, but physical intimacy will never be a problem for them. These two can always satisfy one another because they will always be happy to try new things.

If two Aquarians are friends, they’ll likely end up in the bedroom together at least once. It’s very common for Aquarians to have friends-with-benefits. They don’t need to be in a relationship to have sex, and they don’t feel like sleeping with their friends will ruin a friendship.

Setting boundaries in the bedroom is essential for Aquarians. Aquarius is a sign that loves to defy boundaries, but they also hate it when their boundaries are pushed or ignored.

Two Aquarians should always try to communicate their preferences before having sex. They should talk about any hard-nos and things to avoid. That way, each partner can be spontaneous and free-spirited while still avoiding anything that might cause harm.